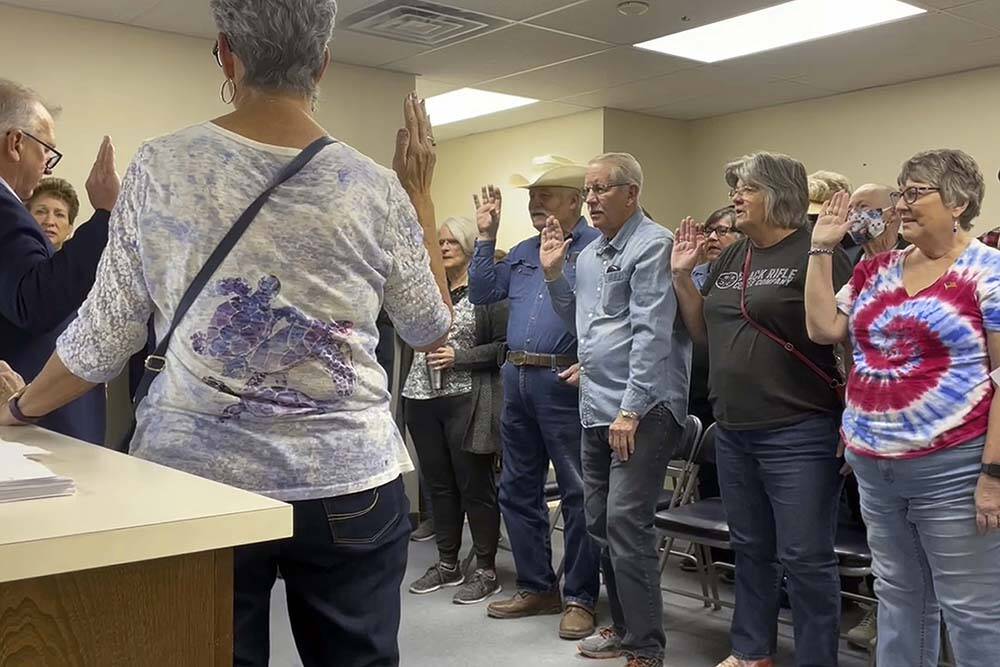 In this image from video, Nye County Clerk Mark Kampf, far left, in suit, swears in a group of residents who will hand count early ballots cast in the rural county about halfway between Las Vegas and Reno, on Wednesday, Oct. 26, 2022, in Pahrump, Nev. Nye is the largest county in the U.S. to attempt a hand count of all its ballots in the midterm elections, a change fueled by conspiracy theories about voting machines. (AP Photo/Gabe Stern 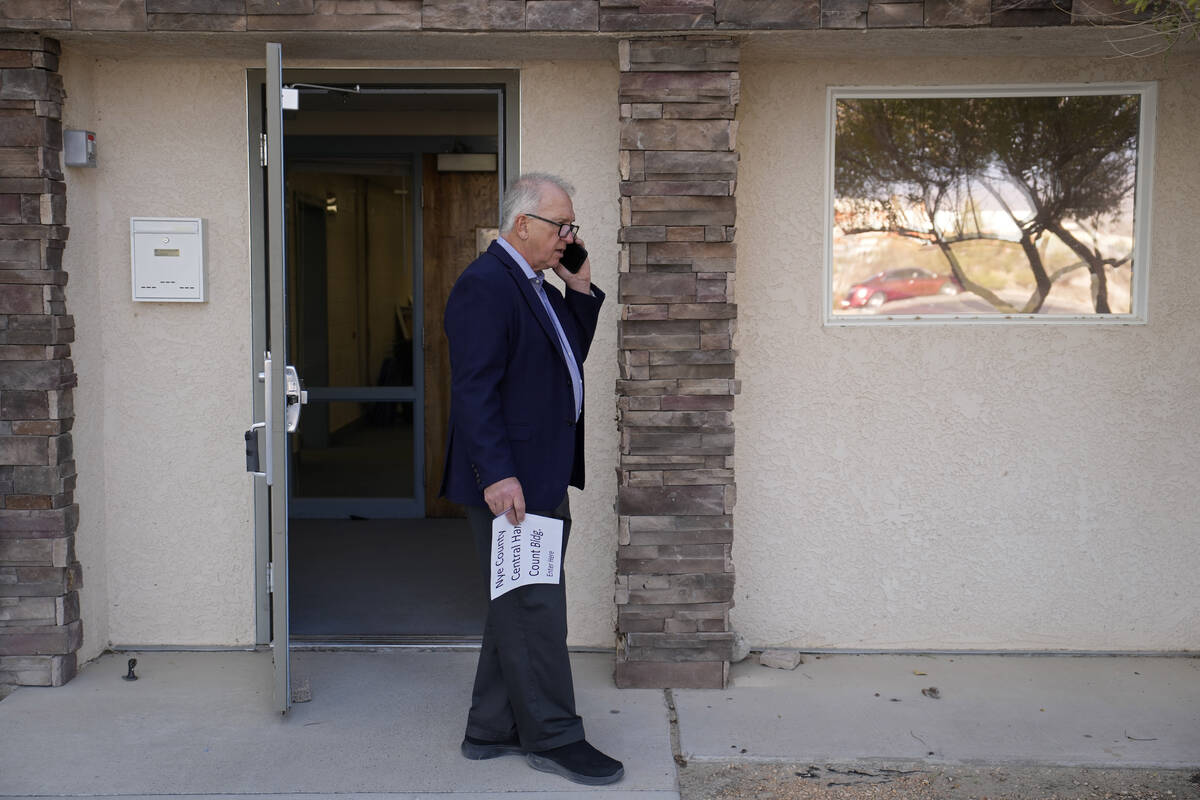 Interim Nye County Clerk Mark Kampf speaks on the phone outside of a building where early votes are being counted Wednesday, Oct. 26, 2022, in Pahrump, Nev. Ballot counting began in the county where officials citing concerns about voting machine conspiracy theories pressed forward with an unprecedented hand tally of votes cast by mail in advance of Election Day. (AP Photo/John Locher) 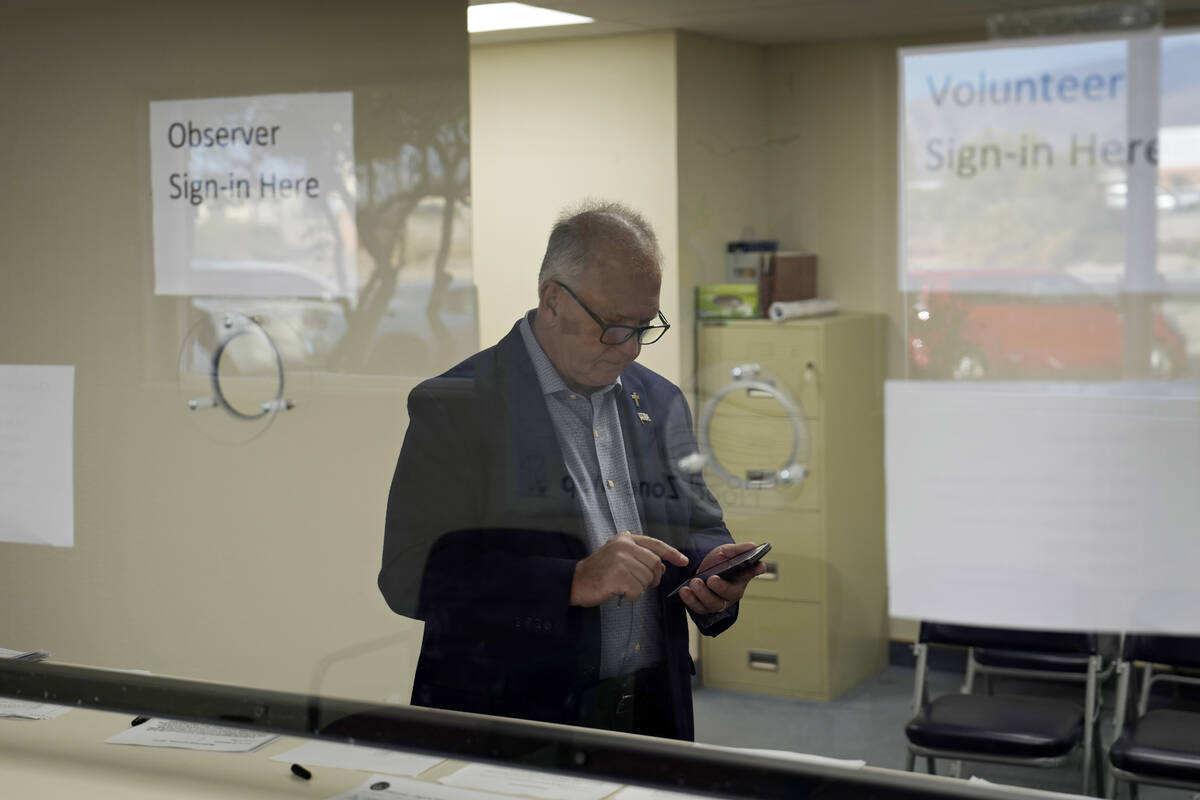 Interim Nye County Clerk Mark Kampf works on his phone in an office where early votes are being counted Wednesday, Oct. 26, 2022, in Pahrump, Nev. Ballot counting began in the county where officials citing concerns about voting machine conspiracy theories pressed forward with an unprecedented hand tally of votes cast by mail in advance of Election Day. (AP Photo/John Locher) 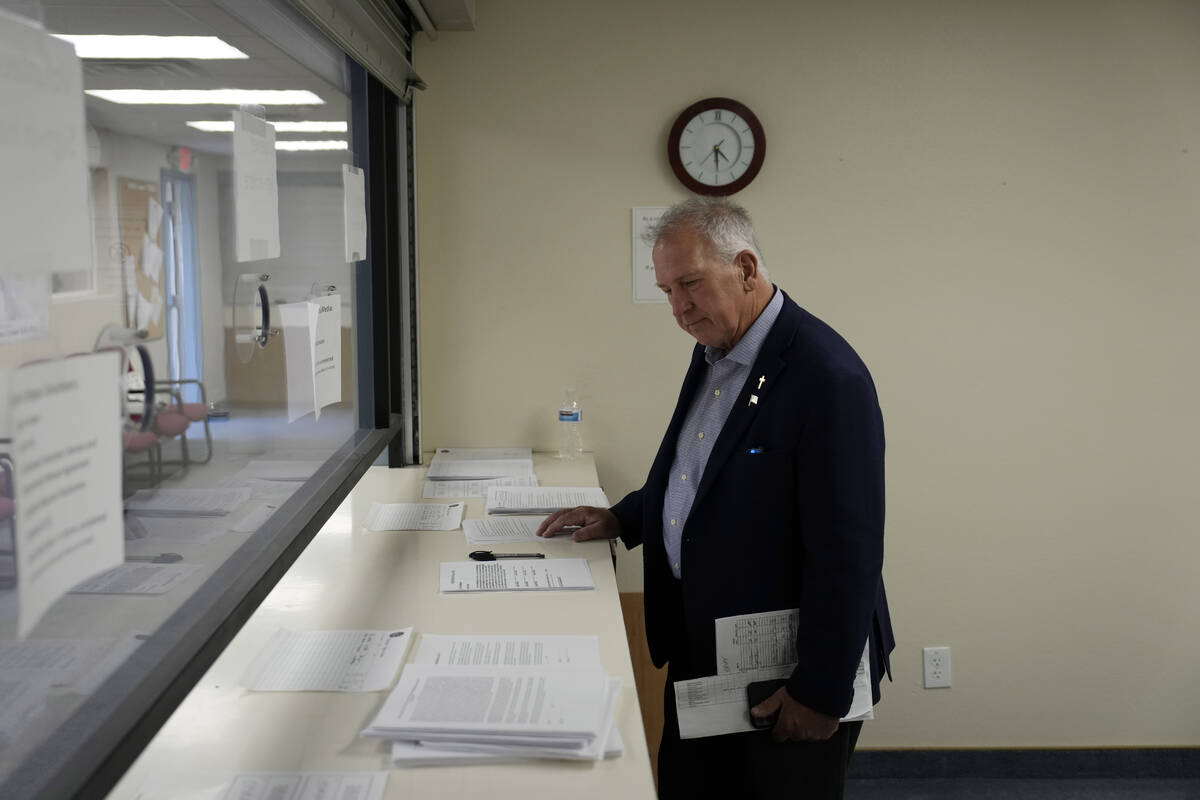 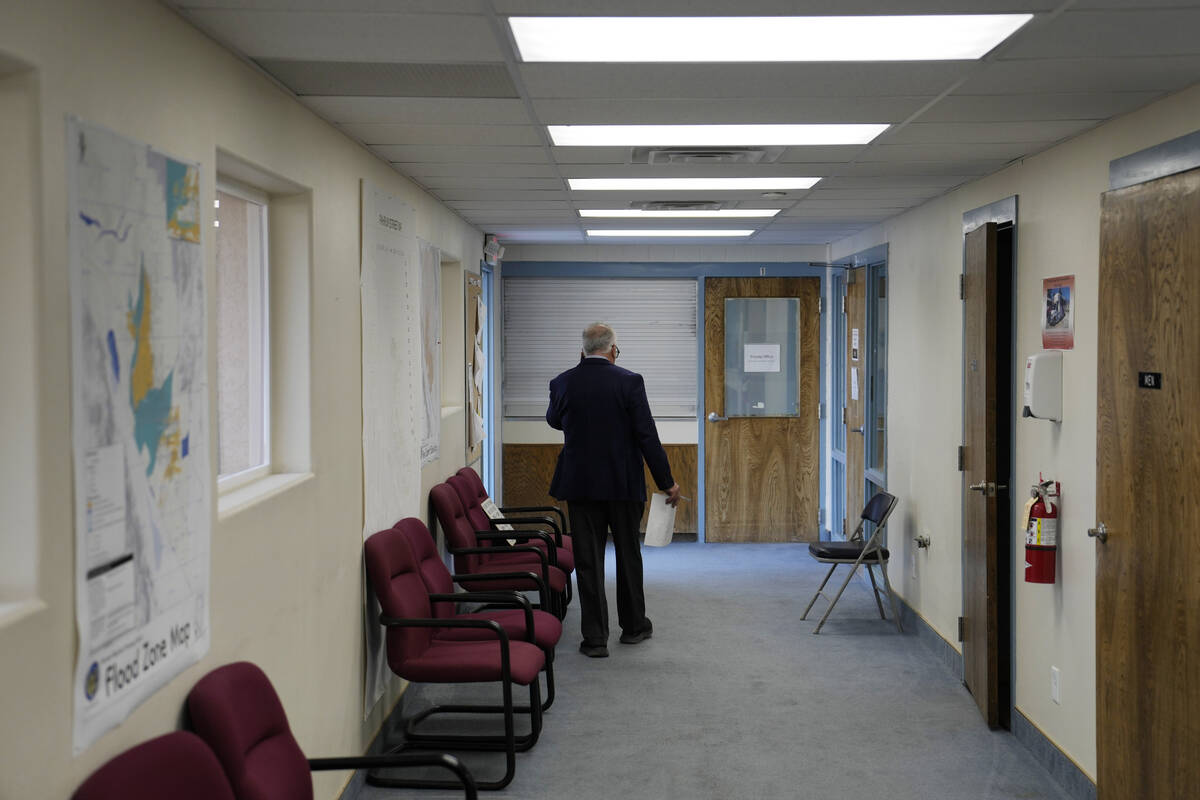 Interim Nye County Clerk Mark Kampf walks down a hallway at an office where early votes are being counted Wednesday, Oct. 26, 2022, in Pahrump, Nev. Ballot counting began in the county where officials citing concerns about voting machine conspiracy theories pressed forward with an unprecedented hand tally of votes cast by mail in advance of Election Day. (AP Photo/John Locher)

Volunteers in rural Nye County had wrapped up a second day of hand-counting the ballots by the time the Supreme Court issued a three-page opinion siding with objections raised by the American Civil Liberties Union of Nevada.

Secretary of State Barbara Cegavske, a Republican who is in charge of elections and has been critical of the sort of voter-fraud conspiracy theories that fueled the hand tallying of ballots that began Wednesday, said the “hand-counting process must cease immediately.”

Citing the court’s ruling, she said in a letter to the Nye County clerk that the current hand-count procedure may not resume until after the close of polls on Nov. 8.

Cegavske said “no alternative hand-counting process may proceed” until she and the county can determine if there are any feasible alternatives that would comply with the Supreme Court order.

Lawyers for Nye County did not immediately respond to a phone message from The Associated Press Thursday night seeking comment.

In its three-page ruling Thursday evening, the high court stopped short of halting the recount. But it sided with the arguments the American Civil Liberties Union of Nevada made in an emergency motion filed earlier Thursday.

The ACLU accused Nye County officials of violating a Supreme Court order issued last week requiring the count to be conducted in a way that prevents public release of early results before polls close to in-person voting Nov. 8.

The ACLU argued that reading candidates’ names aloud from ballots within hearing distance of public observers violates the court rule.

Attorneys for Nye County said in a court filing earlier Thursday that the ACLU was engaging in “political stunts and ‘gotcha’ games.” It asked the court to distinguish between observers verbally describing the “vote count” and observers learning the “election results.”

On the first day of counting Wednesday, The Associated Press and other observers, including some from the ACLU, watched as volunteers were sworn in and split into groups in six different rooms at a Nye County office building in Pahrump, 60 miles west of Las Vegas.

ACLU Nevada chief Athar Haseebullah described on Twitter what he saw as “a disaster of a process.”

Haseebullah on Thursday provided additional detail about an apparently armed polling place volunteer who he said ushered an ACLU observer out of a counting room on Wednesday in a dispute about whether she was improperly tallying votes on a notepad.

“That volunteer never drew a firearm,” Haseebullah said, describing what he said appeared to be a handgun handle visible in the woman’s waistband. “We weren’t removed from the counting site, but that volunteer did pull my team member out of the room where she was observing.”

Interim Nye County Clerk Mark Kampf, in the county filing to the Supreme Court, alleged that the unnamed ACLU observer was taking notes in violation of the court order that said observers “will not prematurely release any information about the vote process.”

Some teams the AP observed spent about three hours each counting 50 ballots. Mismatches, where all three talliers didn’t have the same number of votes for a candidate, led to recounts and occasionally more recounts.

“The first day was a little rough as you could imagine, but today things are going very smooth, much fewer recounts,” Kampf told KLAS-TV in Las Vegas. After counting 900 ballots Wednesday, Kampf said his goal was to count about 2,000 ballots per day.

“There’s no rush for this because this is a test of concept,” he said. While the county plans to count every vote by hand, it is still relying on Dominion voting machines as the primary vote tabulators for this election. Kampf has floated the idea of scrapping the machines in future elections.

In a filing last week, the ACLU sought to block hand-counting before Election Day, saying it threatened to reveal election results before most voters could even weigh in. While the state Supreme Court allowed the count to go ahead, it blocked a plan to livestream the counting, ruling that video can only be released only after polls close Nov. 8.

Rules set by the secretary of state’s office said Nye County had to split teams into separate rooms so anyone observing the count of early in-person and mailed ballots would not know the “totality of returns.” Participants were not identified for the media.

The secretary of state’s office also previously spelled out rules requiring the teams of counters to be bipartisan, but it was unclear whether the vote-counting met those standards. Kampf did not respond to questions about the makeup of the teams or other vote-counting issues from the AP on Thursday. The AP was not allowed to photograph the proceedings.

Election officials and Cegavske declined to respond Thursday to questions from the AP, citing the pending case.

Observers were required to sign a form saying they won’t release results they overhear, under penalty of possible misdemeanor prosecution.

Nye County is an old silver mining region best known as the home of the nation’s vast former nuclear weapons test site. It is home to about 50,000 residents, including 33,000 registered voters.

Nevada has one of the most closely watched U.S. Senate races in the country, as well as high-stakes contests for governor and the office that oversees elections. Depending on their home location, Nye County voters can have more than 20 ballot choices. The county reported receiving nearly 4,700 ballots as of Wednesday.

Ballots cast early, either in-person or by mail, are typically counted by machine on Election Day, with results released only after polls close. In most places, hand counts are used after an election on a limited basis to ensure machine tallies are accurate.

However, Nye County commissioners voted to hand-count all ballots after complaints by residents echoing nearly two years of conspiracy theories about voting machines and false claims that the 2020 presidential election was stolen from former President Donald Trump.

Trump won 69 percent of the vote in Nye County although President Joe Biden won Nevada by about 2.4 percent.

Nye County wanted to start counting before Election Day because it is a time-consuming process and starting later might risk missing a Nov. 17 state deadline for certifying election results.

Nye is the most prominent county in the U.S. to change its vote-counting process in reaction to the conspiracy theories, even though there has been no evidence of widespread fraud or manipulation of machines in the 2020 election, including in Nevada. The decision prompted the long-time county clerk to resign. Kampf replaced her.

The Republican nominee for secretary of state, Jim Marchant, has repeated unsubstantiated election claims and said he wants to spread hand-counting to every Nevada county. In March, Marchant said he would try to have the state’s 15 rural counties adopt hand-counting, then “force Clark and Washoe” — home to Las Vegas and Reno — to do so.