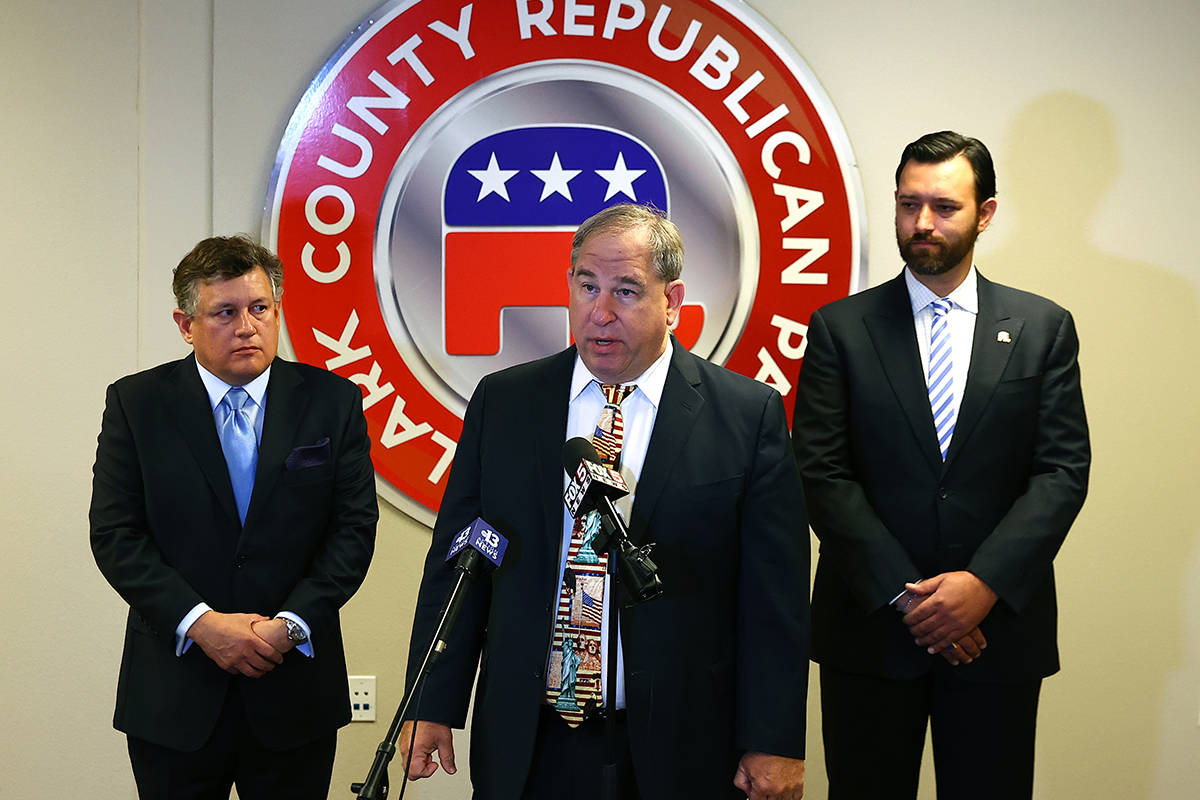 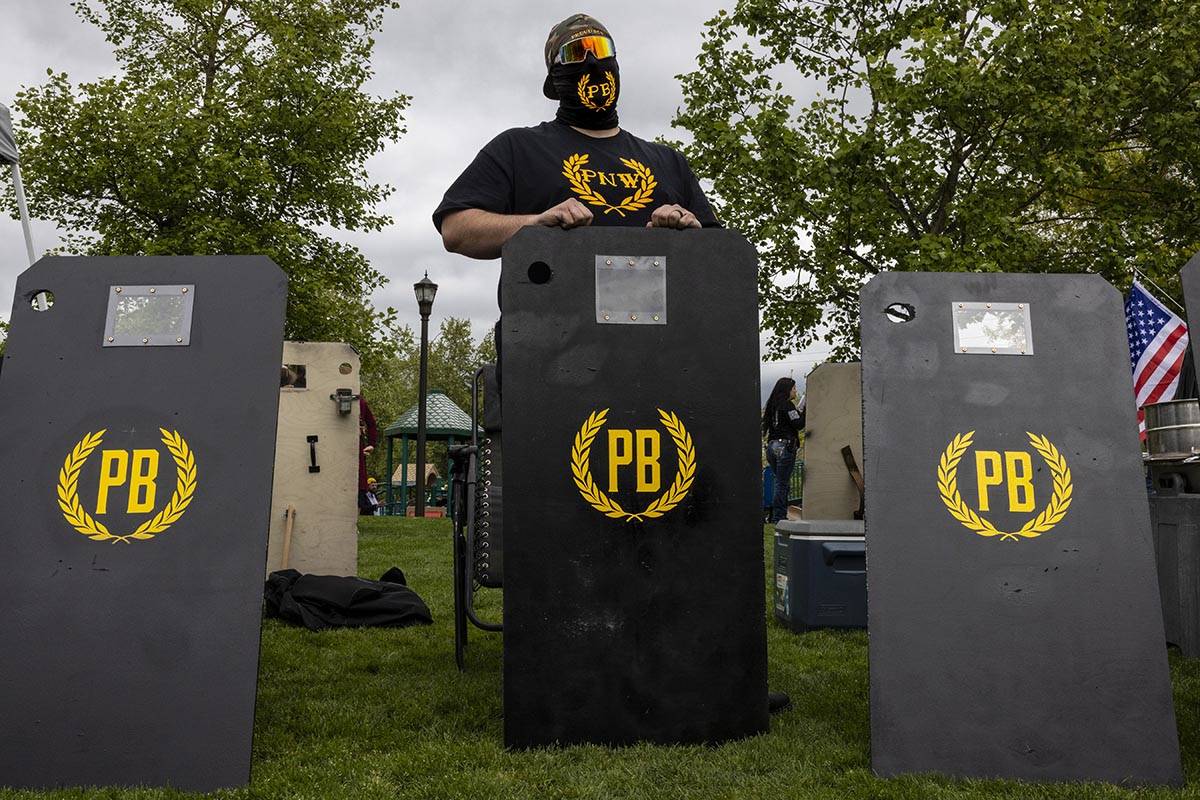 A Proud Boy supporter stands by protective shields as a few hundred people attend a second amendment rally at Riverfront Park on Saturday May 1, 2021 in Salem, Ore. (AP Photo/Paula Bronstein) 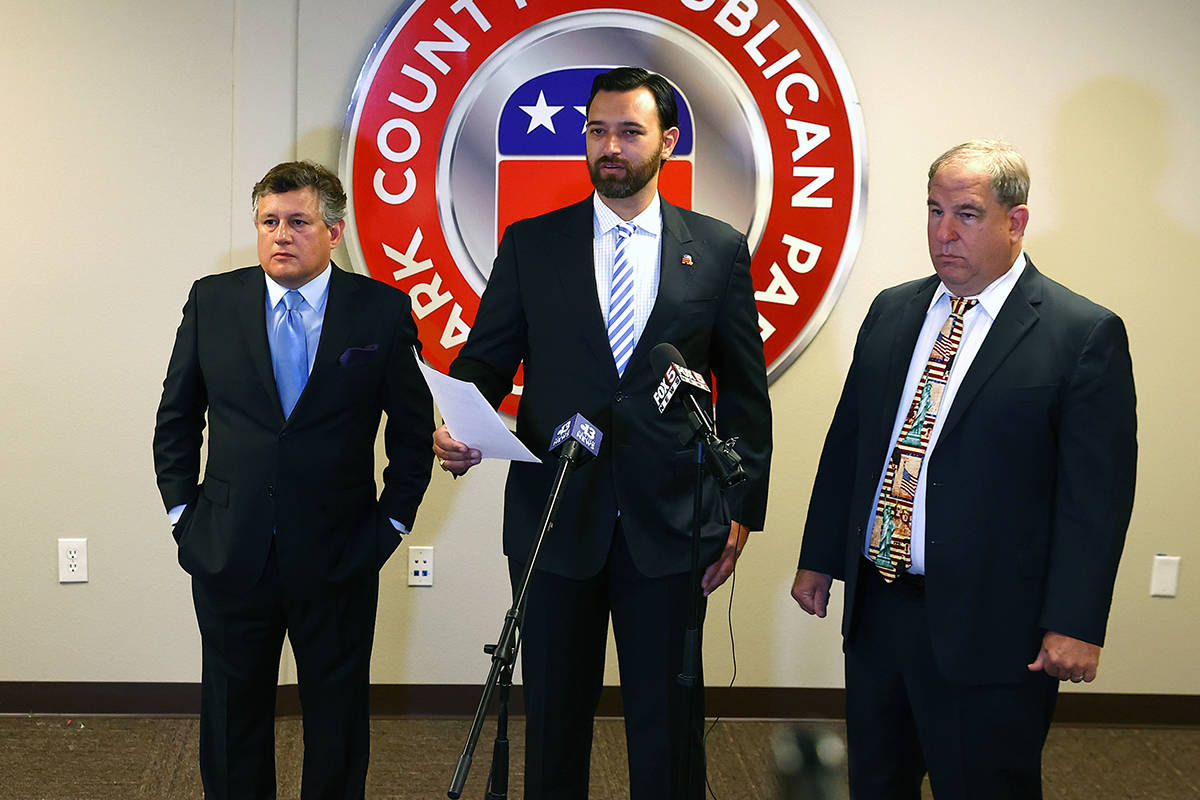 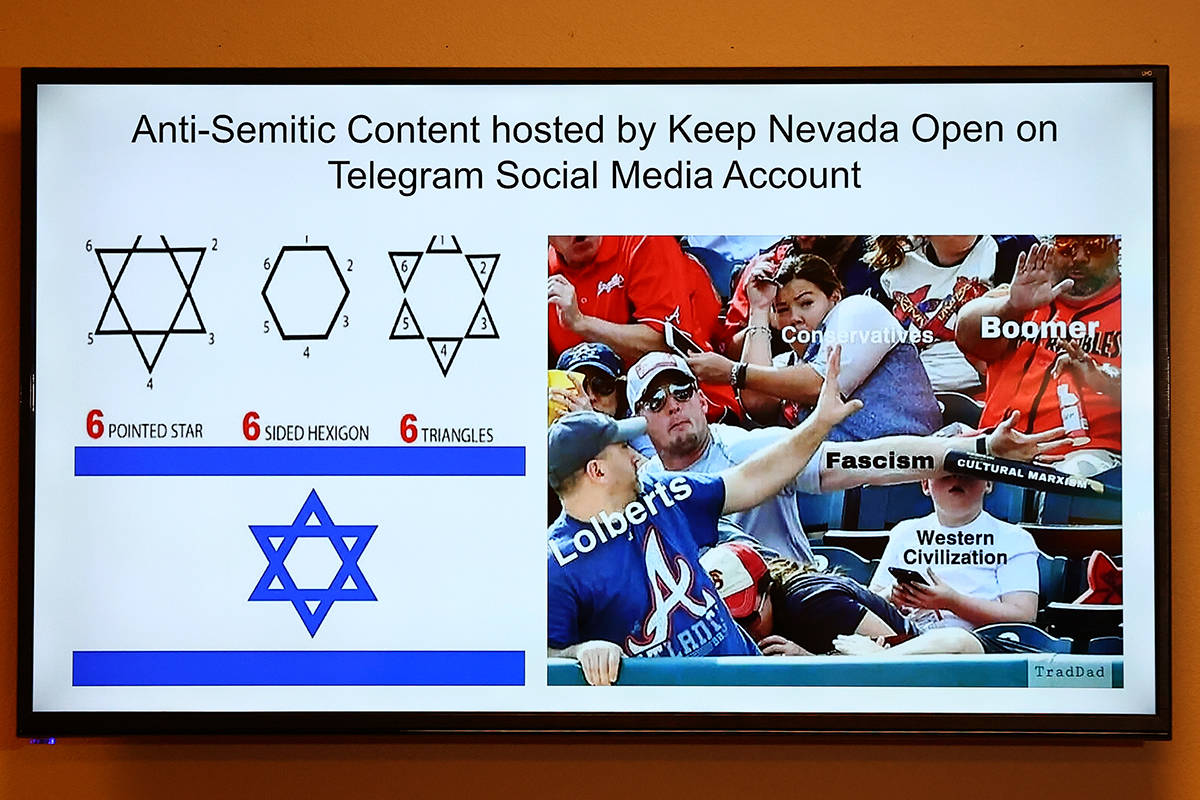 The cancelation follows a Review-Journal report that a group affiliated with the Proud Boys was attempting to elect a slate of leaders to the county party and had threatened several prominent Republicans.

Former Assemblyman Stephen Silberkraus, the Clark GOP’s vice chair, read a statement from the party’s executive board during the news conference.

He mentioned a series of threats made against party officials and elected leaders, as well as a plan to physically block entry into the party’s chosen meeting venue, as the primary reasons for cancellation.

The party also displayed a number of social media posts that its leaders deemed antisemitic and grounds for barring a handful of far-right activists from their central committee — including Rudy Clai, Matt Anthony and Paul Laramie, who were mentioned at length in the Review-Journal’s investigation.

“Members of this group have launched online attacks against some of our female elected officials, including a district court judge, a school board trustee, a state senator and our secretary of state,” the statement said. “The Proud Boys call themselves ‘proud chauvinists’ and by their actions demonstrate the intent to target women and minorities in positions of authority.”

Chairman Dave Sajdak said the group used a social media group, Anthony’s Keep Nevada Open page, as a forum to plan a blockade of their meeting — specifically, to fill the parking lot and pack the streets leading up to First Baptist Church of Las Vegas in order to harass the party’s members and deny them entry to the meeting.

“After contacting (the Metropolitan Police Department), our request for a threat assessment was escalated to the domestic terrorism division,” Silberkraus said. “While we are still waiting on the results of these threat assessments, our management team has decided that the risk to our members outweighs the value of this meeting.”

Sajdak told the Review-Journal the party does not plan to hold another meeting until July, when new officers will be elected. Clai and Anthony were reportedly planning to seek top leadership positions. State Sen. Carrie Buck has previously announced she will seek the chair position.

Anthony denied having made any threats or having knowledge of the antisemitic posts made in his social media group, while Clai and Laramie did not respond to requests for comment in the Review-Journal’s initial story. The group sued the Clark County party on Thursday, claiming its members have been illegally and improperly barred from participation.

Sajdak called the lawsuit “meritless” and declined to comment further. He also declined to identify the state senator who allegedly received threats.

“We welcome everyone that is a reasonable and decent human being who treats others with respect,” Sajdak said of the decision to expel Clai, Anthony and the others. “I will never tolerate racist or hateful speech and attacking other people — human beings in this nature.”

The Nevada Senate Republican caucus has also called for an investigation into a state central committee meeting at which members voted to censure Secretary of State Barbara Cegavske over her conduct of the 2020 election.

After the news conference, the No Mask Nevada PAC released a statement condemning the Clark County Republican Party. The group claimed it will hold a meeting without Sajdak, the party’s executive board or its usual membership.

“The meeting will be held by existing Clark County GOP members who will have a quorum and hold the membership meeting anyway,” No Mask Nevada said.

The group says it has recruited “potentially hundreds” of new members to oppose Buck’s campaign for party leadership.

Reached by phone for comment, Sajdak said such a meeting would not have any standing.