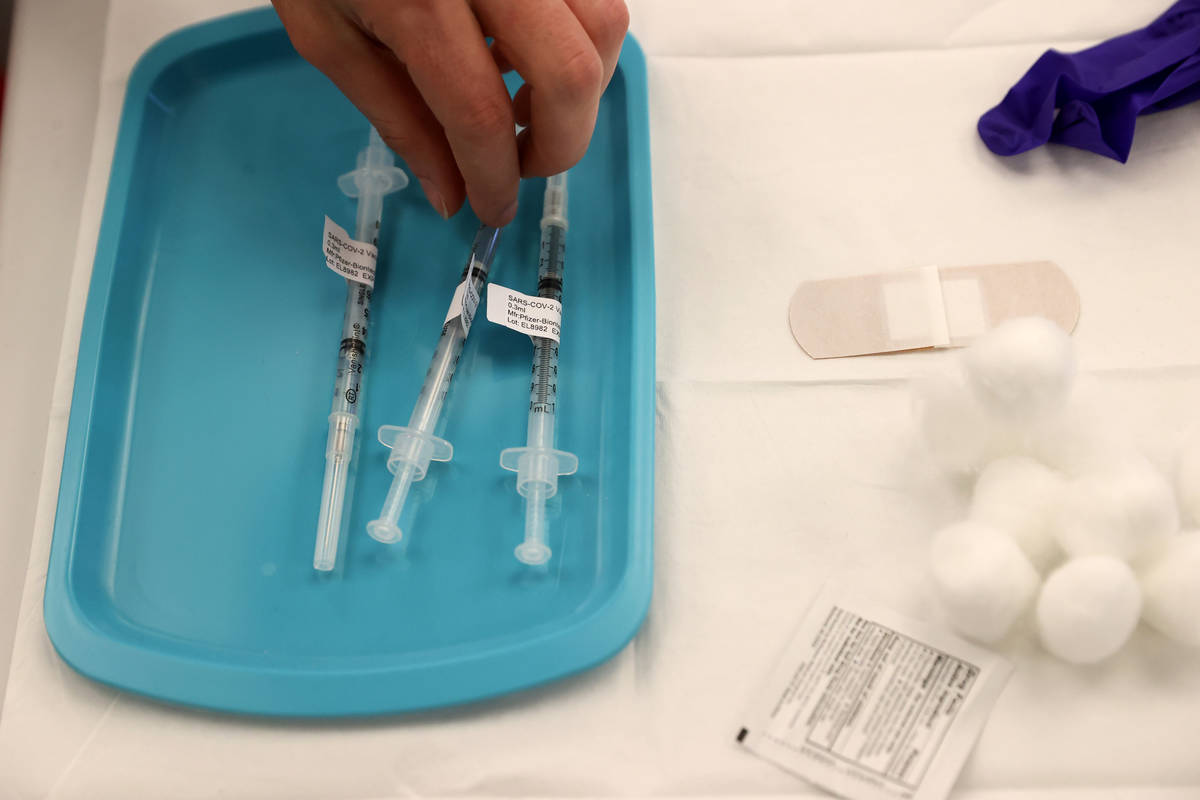 Many of Nevada’s elected officials and their staff members qualify for priority COVID-19 vaccinations under state or federal standards, but the process remains a mixed bag that largely depends on whether they hold or support local, state and federal office.

The vaccination process is perhaps most unclear in the case of the Legislature, which will begin meeting in Carson City on Feb. 1. Legislators and their staff will have to travel and gather in person for the usual, time-sensitive lawmaking and budget-balancing session, but it’s unclear if any plan is in place to ensure a completed two-dose vaccine regimen during the session.

One senior legislative staff member who asked not to be identified because he did not have permission to discuss other staff members’ health said he received a call from the Southern Nevada Health District on Jan. 13 asking him to set a vaccination appointment. The health district also told him to spread the word to other legislators and their staff members.

The staffer received his first vaccine dose on Jan 15, as did with several legislators, their staff members and others.

“We were not seen ahead of anyone else there or anything like that,” he said. “We all had to wait. It took about 45 minutes, which was no big deal. Then they watch you for 15 minutes to make sure nothing happens.”

He was told he would need a second dose in about four weeks, when he and other members and staff will be in Carson City for the legislative session.

“I assume the health district or the state has it set up for us to get our second doses up there,” he said.

Another legislative staff member told the Review-Journal that legislators and their workers were only receiving calls from the health district offering a vaccine in the event of an appointment cancellation.

He was also not aware of a plan to administer second doses to the more than 100 legislators and staffers who plan to meet in close quarters next month.

Health district spokeswoman Stephanie Bethel said legislators and their staff members have been provided with opportunities to be vaccinated. As part of the frontline workforce currently eligible for the vaccine, anyone who was not vaccinated is able to make an appointment through the SNHD website.

She also addressed concerns about receiving a second dose.

“The COVID-19 vaccine is input into the Nevada WebIZ database, and vaccine administrators in Carson City should be able to access the record at the time the legislators go in for their second dose,” Bethel said. “It would not be necessary for them to travel back to Clark County if they are in Carson City.”

The Legislative Counsel Bureau, which handles many of the logistics for legislators during the sessions, and Carson City’s Health and Human Services department did not respond to requests for comment on the vaccination processes for legislators and staff.

The LCB said in a news release Thursday that the session will be limited to legislators, essential staff and a small media pool when it opens. All of these attendees will be tested for COVID-19 regularly.

Once legislators and staff have received both COVID-19 vaccine doses, the LCB will begin allowing some members of the public and lobbyists to participate in person on an appointment basis, with reservations available online.

Both state and local elected officials and staff are part of the “frontline community support” prioritization lane as spelled out in Gov. Steve Sisolak’s latest vaccine playbook, and are thus eligible for vaccination.

Officials getting the shots

Attorney General Aaron Ford received his vaccination on Jan. 11 and shared photos and a statement publicly, hoping to serve as an example of inoculation’s safety. His staff members, who are considered law enforcement/public safety under Nevada law, have also been given the opportunity to get the vaccine.

Vaccinations for Las Vegas city staff and officials appear much more organized than what’s been offered to state politicians.

The city has been receiving calls, emails and social media inquiries regarding the vaccine, which are directed to the health district.

When asked if Mayor Carolyn Goodman or her husband, former Mayor Oscar Goodman, had been vaccinated, Radke said privacy laws do not allow him to confirm individual vaccinations.

On the federal side, members of Congress and up to two of their staff members were first offered the vaccine in December through the Office of the Attending Physician.

Rep. Mark Amodei received his second dose of the Pfizer vaccine on Friday after coordinating with the Attending Physician and the Washoe County Health District. His chief of staff in Washington, D.C., also received the vaccine, as did his legislative director in his Reno office.

He said in an interview Monday that, from a personal standpoint, the vaccination offered little change in his daily life other than some peace of mind as the pandemic and mitigation efforts carry on.

Vaccine distribution has added another layer of calls from concerned constituents to his field offices, which Amodei said have worked around the clock on COVID-related issues, such as testing, as well as usual concerns regarding federal agencies.

Amodei said he believes the vaccine manufacturing process has gone well so far, but he is currently meeting with pharmacies and talking to state and federal officials to make sure the dizzying logistics of vaccinating on a tiered structure are being hammered out.

“You don’t want 300 doses sitting at the VA that the Walgreens on West Sahara could have gotten rid of in a day,” he said.

Amodei did not cast blame on the state, saying weekly allotments are “a moving target” that can take up to two weeks to work out among the various government agencies.

But as a member of Congress, his purview is oversight, and he’s working to get a number of questions answered: How is government making sure the maximum number of doses reaches the states? How are states reaching folks in these high-risk groups, including the elderly and rural communities? How many total people are in those groups, and how many have decided not get the vaccine?

Amodei is particularly interested in latter question, having heard from a Washoe County law enforcement source that as many as 30 percent of his cohorts had declined to get the vaccination.

Rep. Dina Titus also received the vaccine through the Office of the Attending Physician.

“At the advice of my doctor, I received the safe and effective coronavirus vaccine, and I encourage all Nevadans to do so as soon as they are permitted,” Titus said in a statement Friday.

Rep. Steven Horsford has received both doses of the vaccine, spokeswoman Geneva Kropper said. Most of the calls his office receives have been COVID-related for some time, she said, apart from the week of Jan. 6, when constituents grew concerned over the insurrection at the Capitol as Congress worked to count the Electoral College votes.

Sen. Jacky Rosen also confirmed her vaccination and encouraged those who have qualified under state guidelines to do the same.

Congressional staffers working in Nevada do not qualify for priority vaccination under state guidelines, which apply only to state and local government workers. Many have also not been vaccinated through their offices yet, though some may have received the opportunity by qualifying in some other way at the state level.