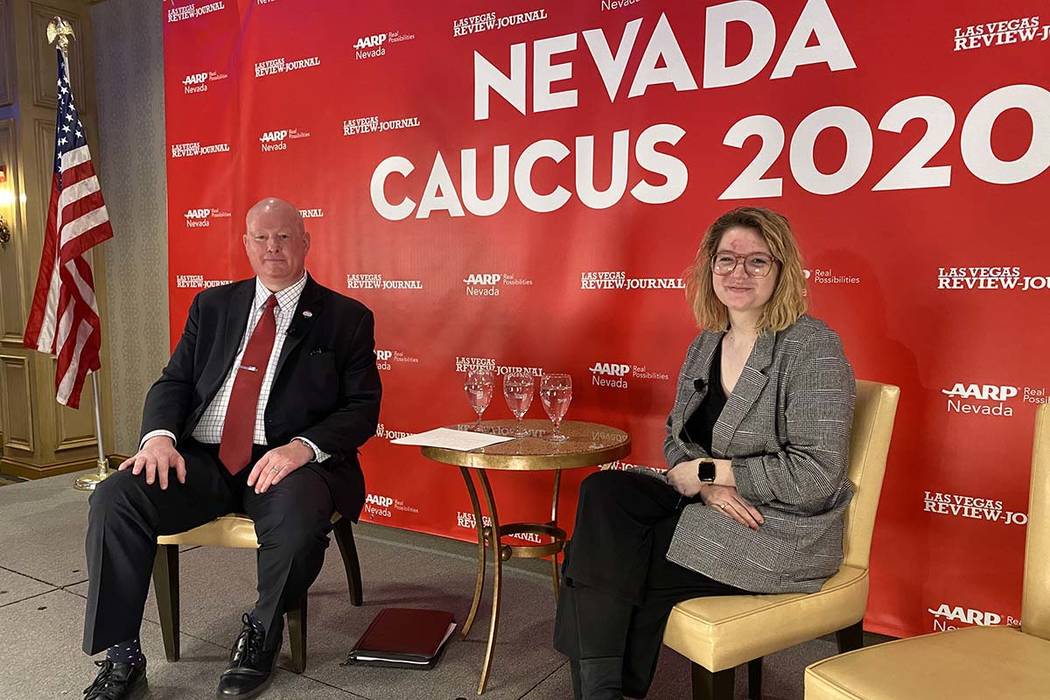 Steve Sebelius, political editor for the Review-Journal, and Emma Kraus, digital director for the Nevada Democratic Party, lead a discussion on the Nevada caucus process in a joint presentation with AARP, Monday, Feb. 10, 2020, at the Suncoast. (K.M. Cannon/Las Vegas Review-Journal) @KMCannonPhoto 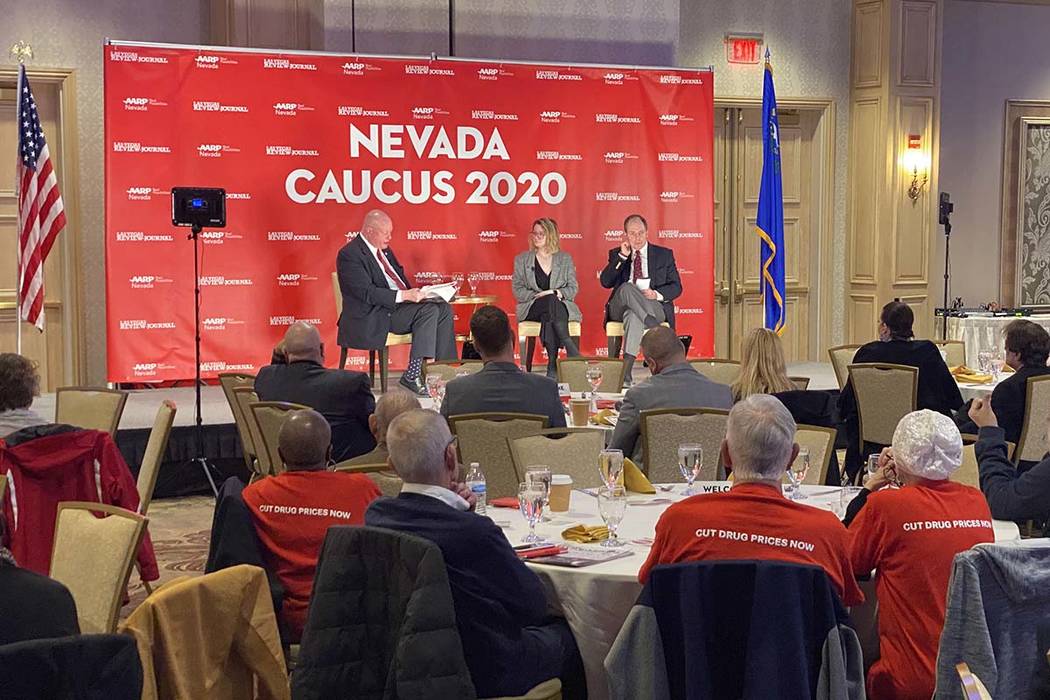 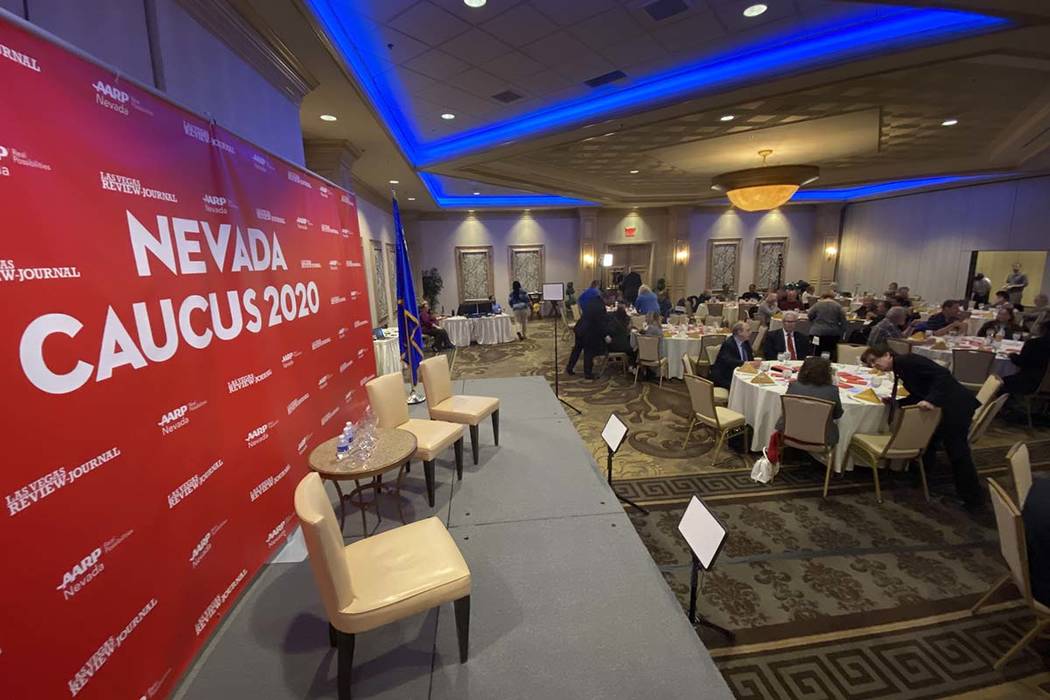 The Review-Journal and AARP host a discussion with the Nevada Democratic Party on the state’s upcoming presidential caucus, Monday, Feb. 10, 2020, at the Suncoast. (K.M. Cannon/Las Vegas Review-Journal) @KMCannonPhoto

The Nevada Democratic Party has been “working around the clock” to ensure that its upcoming caucus will not be beset by issues connected to use of a mobile application in the Iowa caucus, a party official said Monday, although details of how this state plans to achieve a smoother run remained cloudy.

“After the Iowa caucus, we made the decision to no longer move forward with our app, and what we’ve done throughout this whole process is set up backup plans and redundancies to prepare ourselves and make sure that we are in the best position possible,” said Emma Kraus, digital director for the Nevada Democratic Party.

Speaking from the Suncoast during a Nevada Caucus 2020 discussion hosted by the Review-Journal and AARP, Kraus did not confirm whether the party had decided to use pencil and paper to tabulate results.

“Right now what we’re doing is testing and evaluating our best path forward so that we have a successful four-day early voting period, a successful caucus day, and that every Nevada Democrat is able to make their voice heard in this process,” she said.

State Democratic leaders abandoned the electronic system after severe problems with an app by the same developer, Shadow Inc., caused widespread confusion and serious delays in reporting results during the Iowa caucus a week ago.

“We are confident that what happened in Iowa would not have happened here and will not happen here,” Kraus said during Monday’s discussion. “Our team is working really, really hard to make sure our systems are all tested and in place ahead of early vote, ahead of caucus day.”

Following the New Hampshire primary Tuesday, all eyes will turn to Nevada, the first caucus state to offer early caucus voting in the Democratic presidential nomination process. Early voting will run Feb. 15 through Feb. 18, ahead of caucus day, Feb. 22.

There will be 82 early voting sites throughout the state, and voter choices will be securely stored and counted alongside in-person caucus votes on caucus day, according to Kraus.

“It’s a simple process we’ve added to really make our caucus more accessible to folks and really meet Nevadans where they are,” she said.

The hourlong conversation on the caucus came as AARP released results of a poll of more than 1,000 women age 50 and older in Nevada. The poll indicated that health care was a top priority and that more trust was placed in local officials.

“I think that at the end of the day, in most states, what you see is local and state officials actually coming together to try to get things done for the good of the state or for the good of the community,” said John Hishta, senior vice president of campaigns for AARP.

Hishta, who participated in Monday’s discussion, said politics are “very toxic” at the national level, as reflected in the poll, which he suggested offered presidential candidates a road map to what voters are thinking.

He said he believes that Nevada will play a “huge role” in the nomination process, pointing to a longer list of viable candidates than normal, the state’s spot as third in the nation on the nominating calendar and the diversity of this state.

“It’s still wide open, very much so,” he said, adding that though AARP is a nonpartisan organization, it seeks to ensure as much voter participation as possible.

State Republicans have forgone their caucus and instead will vote to bind Nevada’s delegates to President Donald Trump.

Review-Journal politics and government editor Steve Sebelius led Monday’s discussion. The event was sponsored by AARP as a way to inform its members, who were able to ask questions from the audience.