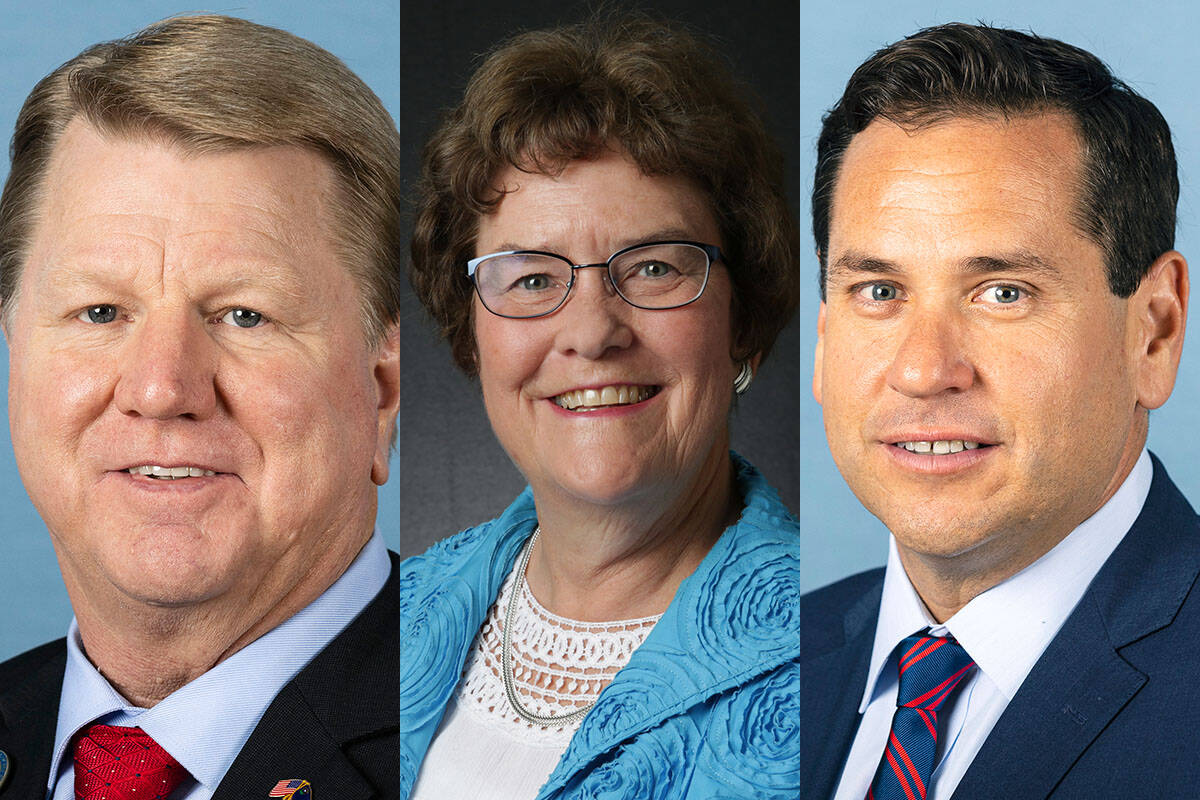 Four candidates, with four very different visions for Nevada’s electoral future, are facing off to be Nevada’s next secretary of state. With incumbent Republican Barbara Cegavske term-limited, former Assemblyman Jim Marchant will take up the GOP banner against the Democratic nominee, attorney Cisco Aguilar. Libertarian Ross Crane and Independent American Janine Hansen are also running for the seat.

The race is arguably the most important on the statewide ballot in November, outside of only the races for U.S. Senate and governor, as the victor will be able to exert control over how elections are conducted in Nevada for the next four years.

Marchant and Aguilar have positioned themselves on opposite ends of most issues in the race. Marchant is an election denier, claiming there was widespread fraud in the 2020 election, while Aguilar commended Cegavske’s conduct after fraud claims surrounded her office’s work.

“We haven’t, in Nevada, elected anybody since 2006,” Marchant told a right-wing podcast in January, “They have been installed by the deep state cabal.”

Those claims of fraud are unfounded, and Marchant himself was elected to the Assembly in 2016. He was also the winner of the 2020 Republican primary for the 4th Congressional District in 2020 and this year’s secretary of state primary. But he still said he doubted the results,

“What am I supposed to do, not win?” he told the Review-Journal after Election Day. “I’m surprised that I won, but I don’t know that the system worked.”

Marchant wants radical change. He’s advocated scrapping universal mail-in ballots, requiring IDs to vote and hand-counting paper ballots while Aguilar wants more protection for election workers. But the one thing the two can seem to agree on is that the next secretary of state must restore citizen’s faith in the office and in elections.

“You have to ensure that it’s not about Democrats, not about Republicans. It’s not about people who are short and tall or purple, yellow, green,” Aguilar said. “This is about Nevadans, and making sure that you are servicing them in their best interest to drive us forward. If you don’t have the trust or confidence in who you are, that you don’t take this seriously, then that’s an issue.”

The secretary of state is allocated six bills in the state Legislature.

“If you look at the number of current openings in both the Secretary of State’s office and at the county level for the election departments, it’s alarming,” he said. “And the reason people are selecting out of those jobs is because of the harassment. It’s because of the abuse they’re taking. I’m putting myself in this position so attack me, come after me.”

A second would focus on small business filings, which he had experience with while representing Agassi and Graf as their counsel.

“The corporate filing system is tough, it’s hard, as a lawyer who has done corporate filings for Agassi,” Aguilar said. “That system is not logical, it could be better and figuring out how do we make it stronger and better for our small business owners. Nobody should have to hire a lawyer to be able to use the system.”

Marchant wants to focus his bill drafts on changing election law. One would make it easier for candidates to challenge election results by allowing them to ask for an audit on their race, as long as they pay for it. Others would repeal universal mail-in voting, require voter ID and mandate using paper ballots instead of electronic voting machines. However, the proposals would be difficult to get passed in a Democratic legislature, he admits.

“We’re just gonna have to wait until we get the people on our side,” Marchant said. “And so we just have to bide our time. Just keep pushing and keep fighting and hopefully, if we can have a fair and transparent election, I think we will get the legislators in office that they want and I think that they will see it our way. This will probably be after my term, so it’s a long process.”

Elections are inherently political, but Aguilar is concerned that his race against Marchant has gotten too political for a position which must oversee elections themselves.

“I think my opponent will use this position in a political way, and that’s detrimental,” Aguilar said. “It really should be neutral, it should be impartial, it should be nonpartisan. Because your responsibility as a regulator within the election side, you have to be neutral. You have to say, ‘This is the law. These are the regulations and this is how it should work.’ That’s what people should expect and be confident in the outcome (of elections).”

Jim Marchant made his start in the early internet. In the late 1980s and early 1990s, he had an idea for a telecommunications company which could manage phone calls over this new-fangled thing called the “world wide web.”

His central Florida-based company found some success and Marchant led a small number of early internet companies in the 1990s and early 2000s. He moved to Las Vegas after retiring from tech in the early 2000s and founded an ice and water vending machine company which he still runs with a business partner.

Marchant’s political journey began in Florida in the 1990s, when he started lobbying against sales taxes for internet businesses. That lobbying was effective, and Marchant became a technology advisor for then-Florida Gov. Jeb Bush, he said.

In Las Vegas he envisioned himself as a behind-the-scenes political advisor, but a friend finally encouraged him to run for office himself in 2016 when he won a state Assembly seat in Summerlin.

“I helped a bunch of candidates get elected. And then they did things that I didn’t I didn’t agree with or wasn’t with my understanding on how they were going to vote,” Marchant said. “So I got upset and a friend said, finally, ‘Why don’t you just run?”

In the Assembly he prided himself on fighting tax increases and focusing on helping small businesses, he said. He lost his 2018 re-election to Democrat Shea Backus, and lost out in the 2020 general election to Democratic U.S. Rep. Steven Horsford.

It would be hard to find an opposing candidate more different than Cisco Aguilar. He is the first in his family to attend college, comes from a working class background, and has used that experience to give back to his community as he has made a successful career as an attorney.

“Somebody with my background, my family history shouldn’t be here. I want to let Nevadans know that this is not something I ever set out to do,” Aguilar said. “I was just growing up in a hard working family where my parents weren’t well educated, but valued the value of education and taking advantage of the education that I have. I have an understanding that Nevadans struggle in similar ways and being able to be there to make a difference in somebody.”

Aguilar moved to Las Vegas about 20 years ago to work as an attorney and has represented a plethora of prominent athletic, education and media industry clients.

He currently chairs the board of Cristo Rey St. Viator Catholic high school and runs a sports technology startup, Blueprint Sports. That company connects college and minor league athletes with endorsement deals using an online platform. Much of his activism has been focused on education, inspired by his background and advice from Agassi and others, he said.

Outside of running the state’s elections, the secretary of state is also responsible for managing business licenses and other regulatory frameworks. Both Aguilar and Marchant want to use their previous business experience to make registering and opening small business easier.

“When I served in the Assembly, I was running on the conservative business course,” Marchant said. “I’m not really a radical social type conservative, I’m more business oriented. I want to help businesses. I want to make it easy for businesses to operate.”

Next to Marchant and Aguilar on the ballot is both Janine Hansen of the Independent American Party and Ross Crane of the Libertarian Party. Crane declined to provide comment for this story.

Hansen is the current chair of the Independent American Party of Nevada and the sister of its founder, Daniel Hansen. Like Marchant, Hansen believes that there were “serious problems in the election,” and wants the state to pass reforms like repealing universal mail-in voting and getting rid of same-day voter registration.

She left the Republican Party due to her personal opposition to the Equal Rights Amendment in the 1970s, and is running for office now to get out the message of the Independent American Party.

“We offer a choice that’s not available between the major parties, dedicated to the constitutional principles of limited government.” Hansen said.