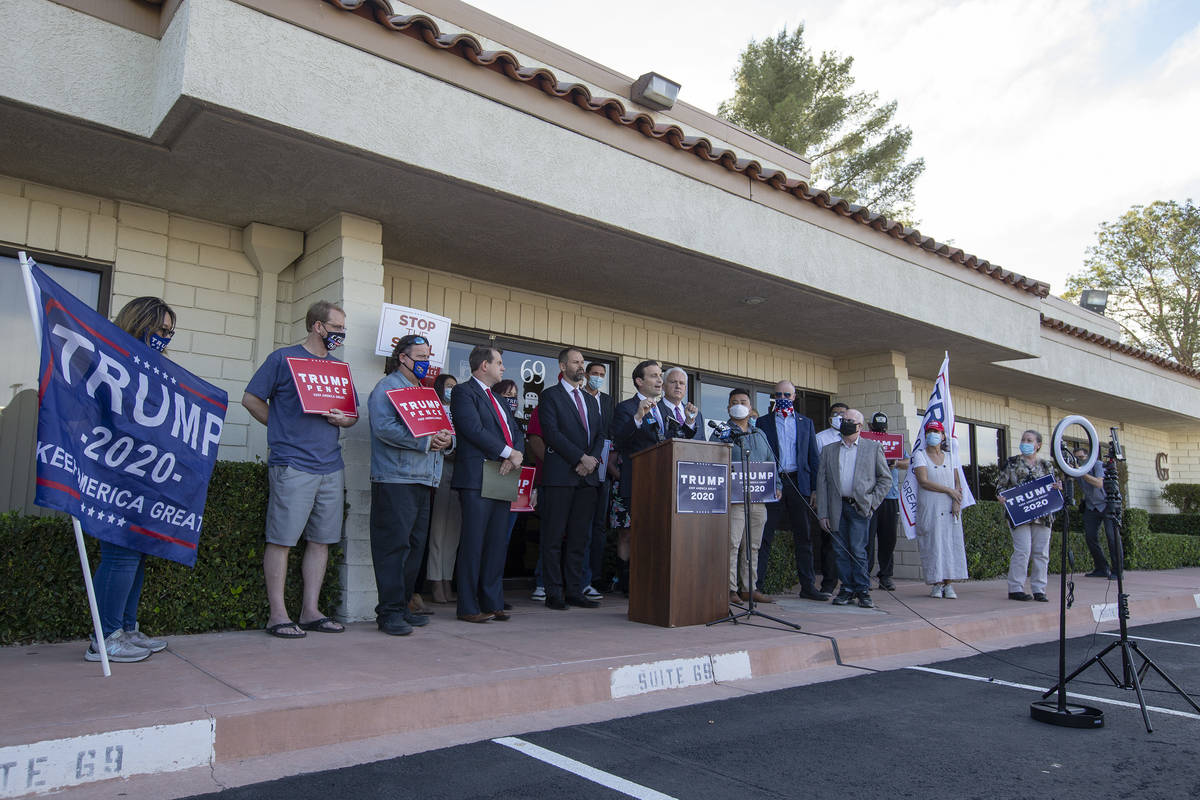 While Republicans continue their attempts to cast doubts on the election results, some members of the GOP find themselves in a precarious spot: trying to toe the party line while claiming their own election victories should be seen as valid.

A half-dozen Republicans or conservative groups, including President Donald Trump’s campaign, have sued trying to overturn election results in Nevada, rehashing unsubstantiated claims of widespread voter fraud that have been repeatedly rejected by the courts.

But those claims would also appear to cast doubts on Republican victories down the ballot in Nevada. The Republicans who won those races say they are confident in the results that led to their own victories, though, despite repeating some of the same concerns about the election at large.

However, at least one sitting Republican state senator said he believes that Nevada’s elections were fair and he is worried that the GOP’s attempts to overturn the results based on the specter of fraud could have consequences for the public’s belief in the election process.

Asked Friday if he believes Nevada’s elections were fair, Sen. Ben Kieckhefer, R-Reno, said, “I do.”

He said several constituents reached out to him with questions about their mail ballot and whether it was counted. In every case, they were able to work through their concerns, identify when and where the ballot was cast and confirm that it came from the constituent, he said.

Kieckhefer, who was not up for re-election this cycle, said he has some concerns about the process, such as the verification of signatures. He said those should be looked at by state lawmakers when the Legislature convenes next year.

“But that doesn’t mean that massive fraud took place either,” Kieckhefer said. “Overall, the election we’ve had I think is clearly going to stand.”

What’s happening in Nevada can be seen as a microcosm of the nation in the weeks since Election Day.

Trump lost both the national popular and electoral college vote and is suing in several states in an attempt to have those results overturned, citing unproven claims of fraud. Those lawsuits have resulted in nearly universal defeats in court for Trump’s campaign across the country.

But even as Trump and Republicans at the top of the ticket lost, the party performed well down the ballot, netting six seats in the U.S. House in a year in which several election forecasters predicted that Democrats would expand their majority.

In Nevada, Trump lost to former Vice President Joe Biden by about 2.4 percentage points, and Democrats held on to the competitive 3rd and 4th Congressional Districts.

As with national congressional races, Republicans performed better down ballot in state races, netting four seats in the state Legislature in a year that Democrats had viewed as an opportunity to take a two-thirds supermajority in both chambers.

“The idea that there was a Democratic conspiracy to rig the election but stop at the top of the ticket seems somewhat implausible,” Kieckhefer said.

Assemblywoman Jill Tolles, R-Reno, said the question of election fairness is about whether the results are valid.

“While I believe there were mistakes and opportunities for possible fraud and there is much we can do to clean up the process to restore faith in our election system, I have not yet seen enough verified evidence to conclude that the results in races won by a large margin will be reversed when it’s all finalized,” Tolles said. “If there was fraud or voter suppression, there is a process to investigate and prosecute it.”

Many of Kieckhefer’s and Tolles’ fellow Republicans have a different take on the results, to say the least.

Another lawsuit was filed by the Election Integrity Project asking to throw out every election in the state. And Trump’s campaign filed another lawsuit last week asking the court to declare him the winner of Nevada’s six electoral votes, despite Biden’s 33,596-vote margin of victory, a number that exceeds Hillary Clinton’s 2016 winning margin.

Judges denied two of those lawsuits Friday. A third — Becker’s lawsuit — was withdrawn. The lawsuits from Rodimer and Trump’s campaign have not yet been heard, and Arrington’s case is still pending.

The lawsuits from the candidates use discrepancies found within the Clark County Commission District C race that caused the Board of Commissioners, which is made up entirely of Democrats, not to certify that specific race as part of the basis for the lawsuits.

But that race was uniquely close. The final unofficial results for Commission District C showed Democrat Ross Miller defeating Republican Stavros Anthony by just 10 votes out of more than 153,000 cast. County Registrar Joe Gloria said Tuesday that his office had identified 139 unexplainable discrepancies in that race — discrepancies that he said were similar to those found throughout the county, such as early voting and Election Day check-in errors and issues related to tracking of the process of mail ballots.

Since the number of discrepancies exceeds Miller’s margin of victory, Gloria said it called the validity of the race into question. Miller is suing to stop a special election, and that case is still pending.

But Gloria told the commission that the Miller-Anthony race was the only one he had concerns with because of the narrow margin. In total, Gloria said they had identified 936 issues over the 975,000 votes cast countywide.

Matthews was critical of the election at large, repeating the same claims about there being “some degree of fraud,” tied to the state’s increased use of mail ballots amid the COVID-19 pandemic, claims that have been raised in the other Republican lawsuits that the courts have rejected.

But when it comes to his own race, Matthews said he doesn’t think fraud factored into his win and does not think there needs to be a new election for the seat.

“I’m very confident in my victory,” Matthews said, noting that the results were along the lines of what his campaign was expecting.

“Neither I nor my campaign team have identified any instances of fraud in my race,” Matthews added.

Other Republicans who won in competitive races expressed similar sentiments.

Carrie Buck, who defeated Democrat Kristee Watson in Senate District 5 by 329 votes to flip the previously Democratic-held seat, said the mail-in ballots posed “all these doubts and calls into question” the election in general. But she said that it was hard work, talking to voters door to door and people knowing her story that allowed her to win. SD-5 overlaps Assembly District 21, which is one of the races being challenged in court by Republicans.

Sen. Heidi Gansert, R-Reno, who held off Democratic challenger Wendy Jauregui-Jackins in Senate District 15, said it “is fair to examine different cases.” Asked if her victory was fair, she said “I have not heard anything to the contrary.”

As Republicans continue to pile on unsupported claims and cast doubt on the elections, Kieckhefer said he’s concerned that those efforts are undermining people’s faith in American democracy.

Kieckhefer pointed to the Thursday news conference from Rudy Giuliani, in which Trump’s personal lawyer cited wild conspiracy theories about the election and Trump’s defeat on the national stage.

“Those types of things getting thrown out there have to be supported or you’re doing a disservice to the nation you’re trying to work for,” Kieckhefer said.

Kieckhefer said he believes the election results in Nevada will stand, and he has faith in the courts handling the plethora of lawsuits to “wade through them and rule on the facts.”

But he worries about the precedent that’s being set right now.

“I do have concerns about where we go from here based on the narrative of unfair elections. I think there are certain things that institute faith in the people’s faith and trust in its government. Primary to that is the belief that our elections are fairly run,” Kieckhefer said. “Without that, you don’t have the consent of the governed in the way that allows us to continue moving forward.”