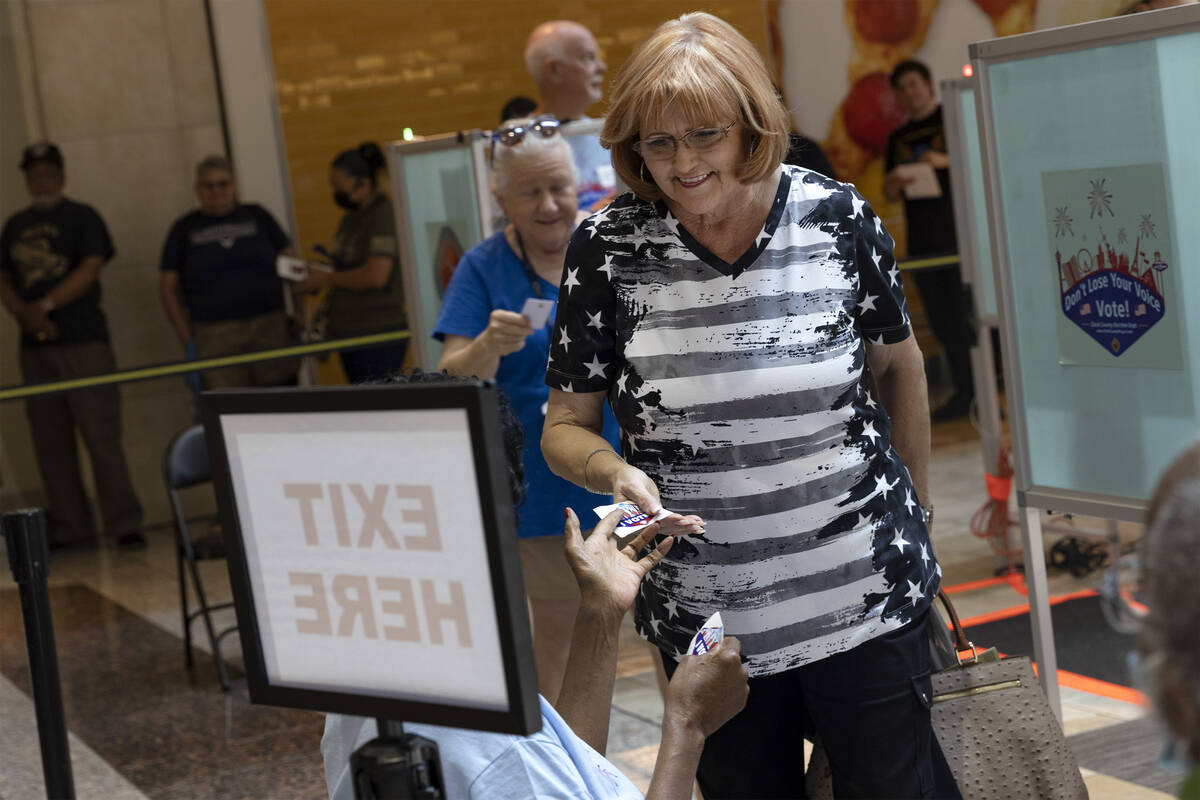 Cheryl Hartle, of Las Vegas, receives a sticker after casting her ballot during early voting at Galleria at Sunset shopping mall on Saturday, May 28, 2022, in Henderson. (Ellen Schmidt/Las Vegas Review-Journal) @ellenschmidttt

Just more than 140,000 Nevadans have cast in-person or mail-in ballots for the 2022 primaries as of this weekend.

Only 17.4 percent of those votes came from outside of Clark or Washoe counties as of Friday, with the state’s two largest cities making up nearly all early votes. About 82,000 Clark County residents and 34,000 Washoe County residents have cast early ballots either in-person or through the mail as of Monday.

Turnout so far represents about 6.5 percent of active registered Nevada voters. The rate is slightly lower in Clark County, at 5.3 percent, but that is still a significant improvement from numbers over Memorial Day weekend, as less than 1 percent of Clark County voters cast early ballots in the first three days of early voting last week. Turnout is much higher in Washoe County, where 10.8 percent of eligible voters have cast early ballots.

Statewide, Republicans appear to prefer to vote early in-person — they make up 57 percent of in-person voters compared with Democrats making up 34 percent — and Democrats prefer mail-in ballots, making up 43 percent of ballots to Republicans’ 36 percent, according to Nevada secretary of state data released Monday.

So far, the highest in-person early voting turnout came on the first day, May 28, when 7,634 voters turned out statewide. In the last midterm primary election, more than 63,000 people turned out to vote in person during the first week of early voting, or 4.4 percent of all active registered voters. Historically from 2000 to 2020, overall primary election turnout has averaged 24.26 percent of all registered voters.

In-person early voting ends Friday, and you can find your local early voting location using the county’s website. The primary is Tuesday, June 14. Mail-in ballots must be postmarked by Election Day and received by the county elections department by June 18.