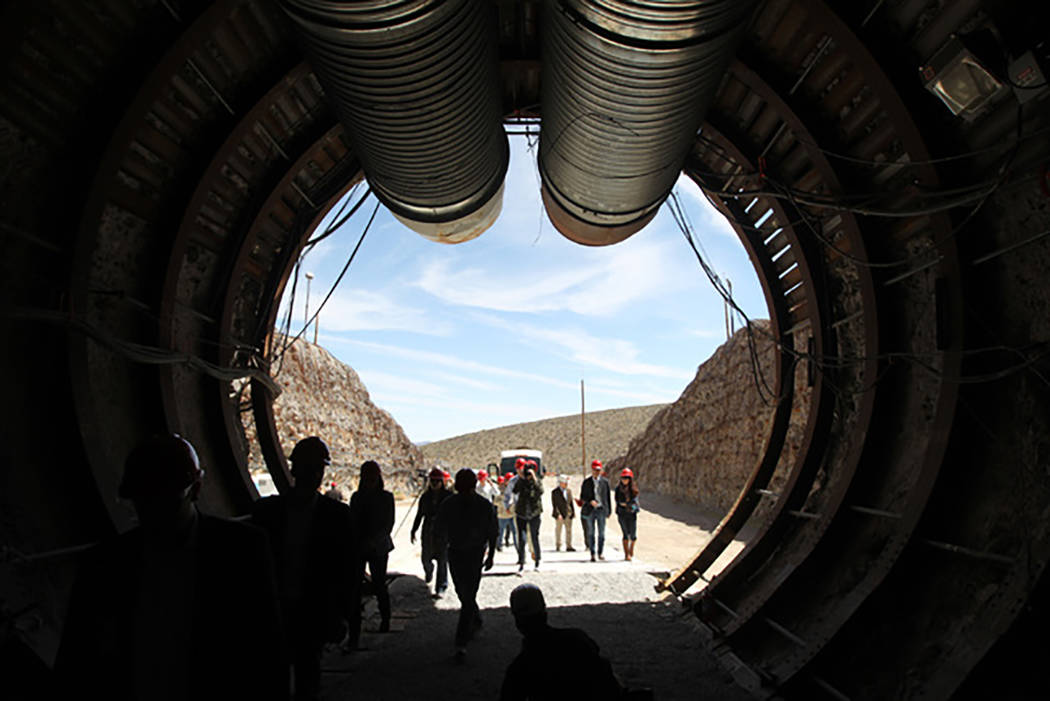 WASHINGTON — Energy Secretary Rick Perry appeared before a Senate panel Tuesday where he laid out his department’s $30 billion budget that includes $120 million to revive licensing of the Yucca Mountain nuclear waste repository plus implement interim storage at other sites.

“We must move ahead in fulfilling the federal government’s responsibility to dispose of the nation’s nuclear waste,” Perry told the Senate Energy and Natural Resources Committee.

Perry said $120 million in the budget would go to addressing nuclear waste. He said there was $110 million to restart the licensing of Yucca Mountain in Nevada, and $10 million to implement an interim storage program.

The secretary said interim and permanent sites were immediately needed to accept wastes generated at 39 nuclear-power plants across the country.

The budget is for fiscal year 2019, which begins Oct. 1. The amount is far less than that appropriated a decade ago when the Yucca Mountain project and licensing was underway.

But transparency in the Department of Energy’s spending of carryover funds since the Yucca Mountain licensing process was suspended in 2011 drew questions from Sen. Catherine Cortez Masto, D-Nev., a member of the committee.

She wants a full accounting of the $42 million that was left in federal accounts since the process ended, and a recent estimate that only $10 million was available to spend on the process.

“I’ll review it and give as timely a response as soon as possible,” Perry told Cortez Masto.

The Nevada senator also grilled the secretary on plans to move ahead with budget requests when Perry admitted a final design for the Yucca Mountain facility does not exist, or whether certain technology and materials to be used in the application 10 years ago would remain a viable option.

“Congress funds a number of things without having a final plan done,” Perry said. “This is nothing out of the ordinary.”

“I disagree,” Cortez Masto shot back. “I’m sitting here in Congress and I want a final plan. I want to know how the money is being spent. I want an analysis, I want an assessment. I think it’s irresponsible not to ask those questions.”

Congress designated Yucca Mountain in 1987 as the site for storage of nuclear waste produced by power plants. The failure of the government to adequately store the growing backlog of waste is cited as a security threat.

The state of Nevada overwhelmingly opposes the Yucca Mountain site, with the exception of rural counties who see development of a facility as an economic boon, and other proponents who say the storage could position the state for a growing reprocessing industry.

Sen. Lisa Murkowski, R-Alaska, the committee chairwoman, entered into the record a request from Sen. Dean Heller, R-Nev., urging lawmakers not to approve the Trump administration request for funds for development at Yucca Mountain without consent from the governor, local communities and native tribes.

Nevada Gov. Brian Sandoval, a Republican, has remained an ardent opponent of Yucca Mountain and has directed state efforts to fight the project through the licensing process and other means.

Companies in West Texas and New Mexico have submitted paperwork with the Nuclear Regulatory Commission to seek a license for interim storage of nuclear material in those states.

But even with interim sites approved, the growing stockpile of waste across the country will require a permanent repository that can handle in excessive 75,000 metric tons, experts told the House Energy and Commerce Committee last year.

Legislation in the House would increase storage capacity at Yucca Mountain, if constructed, to 110,000 metric tons of waste.