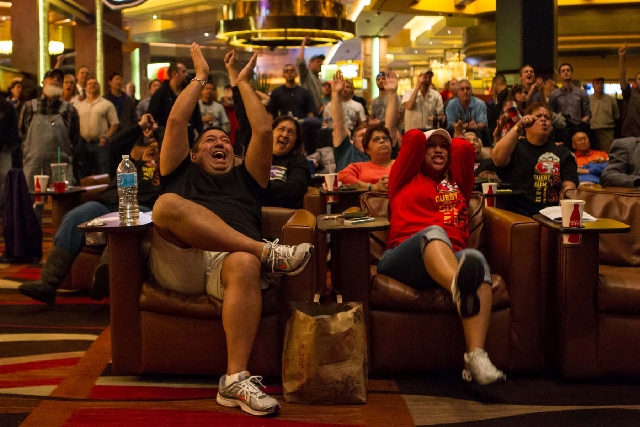 Ravens fan Shannon Goo of Honolulu, Hawaii, left, cheers as his friend, 49ers fan Ramsey Gaspar of Las Vegas, reacts, during the Super Bowl in the sports book at Red Rock Resort in Las Vegas on Feb. 3. Legislation that passed the Senate on Tuesday would allow private equity groups to place bets at Nevada sports books, a big change from current law, which only allows bets by individuals.

CARSON CITY — A bill that would allow private equity groups to place large bets at Nevada sports books saw near unanimous support Tuesday in the Senate.

Senate Bill 346, which would authorize the Nevada Gaming Commission to adopt rules to regulate “entity” bettors, now heads to the Assembly for consideration.

It passed the Senate with 20 votes in favor. Sen. Justin Jones, D-Las Vegas, did not vote on the bill.

Now, only individuals can wager at Nevada sports books. Nevada holds a virtual monopoly on sports betting under a 1992 federal law.

Supporters of the bill said the “entity” bettor measure would position Nevada to capture some of the estimated $380   billion bet illegally on sports each year in the United States.

The bill is sponsored by Sen. Greg Brower, R-Reno.

Former Gaming Control Board Chairman Mark Lipparelli, who is a gaming industry consultant, said recently that the measure is good for Nevada.

“The state should embrace this idea,” Lipparelli said. “It will increase transparency, bolster competition and move at least one small element of the billions of dollars of illegal wagering out of the shadows. I have high confidence Nevada regulators will create a balanced framework that would address any concerns that could emerge.”

Nevada books now see a sports “handle,” or betting action, of $3.5 billion annually. Some observers estimate that amount could triple over five years if the bill becomes law.

The bill was amended to address concerns raised by state gambling regulators over the policing of such entities to guard against money laundering, underage gambling and illegal messenger betting.

All members, partners, shareholders, investors and customers of the equity group would be required to register with the Gaming Control Board.

Another betting-related measure, Senate Bill 418, which would allow wagers on presidential and congressional elections, also was approved in the Senate.

The bill, sought by Sen. Tick Segerblom, D-Las Vegas, passed on a 14-7 vote and now goes to the Assembly.