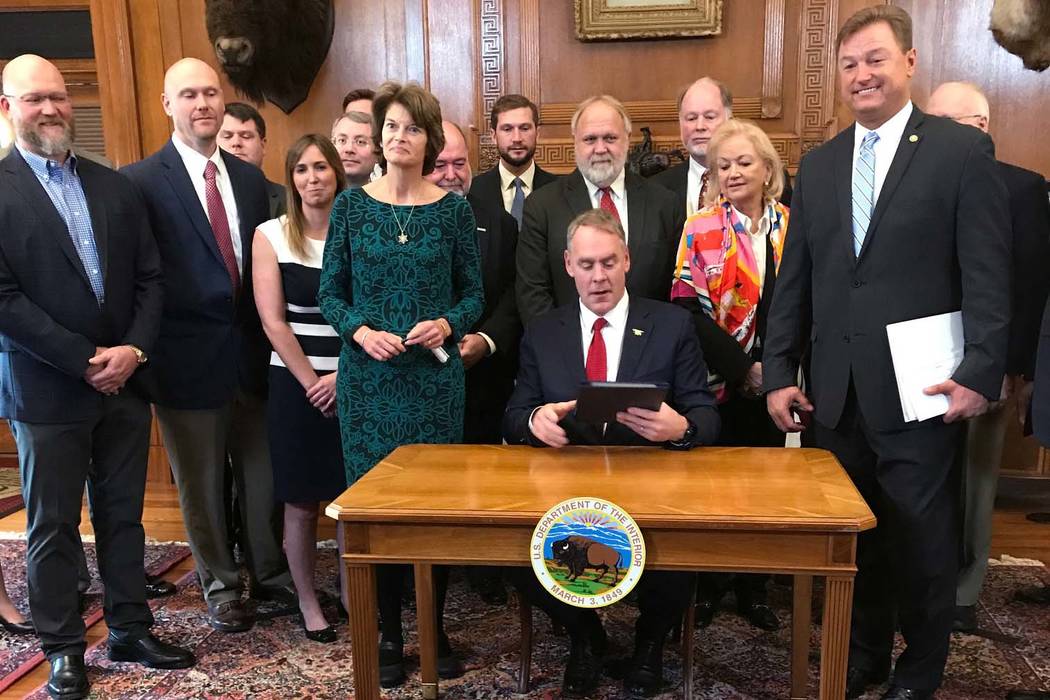 Interior Secretary Ryan Zinke is flanked by Sen. Lisa Murkowski, R-Alaska, and Sen. Dean Heller, R-Nev., Thursday, Dec. 21, 2017, at a ceremony where the secretary signed a directive to identify the location of critical minerals used in military weapons and consumer goods like computers, cellphones and electronic devices. The ceremony was held at the secretary's office at the Department of Interior. (Gary Martin/Las Vegas Review-Journal)

WASHINGTON — Interior Secretary Ryan Zinke launched a campaign Thursday to identify deposits of critical minerals in Nevada and other states to break dependence on foreign supplies of raw materials needed for military equipment and consumer goods like cellphones and computers.

Zinke said the campaign would focus on a mapping, much of it aerial, to find the minerals, increase geological data, and streamline the application process to expedite domestic mining and production.

“Right now, the United States is almost completely reliant on foreign adversaries and competitors for many of the minerals that are deemed critical for our national and economic security,” Zinke said at a ceremony at the Department of Interior.

Zinke signed a directive to implement a presidential order to create a federal strategy to ensure and secure reliable sources of 23 critical minerals.

The directive signed by Zinke calls for the Bureau of Land Management and the U.S. Geological Survey to determine the cost to map the country to find the location of critical minerals. A report on the scope and cost of the project will be presented to Congress.

“Those are good-paying jobs,” Heller said.

But the permitting process is broken, he said.

“What the secretary is saying is we need certainty in the mining industry,” Heller said.

He said electric-carmaker Tesla chose to place its Gigafactory in Nevada, not just because of a $1.2 billion tax incentive package, but because of the location of lithium mines that produce raw materials for the company’s lithium-ion batteries for its cars.

“We’re talking about economic development in my state,” Heller said. “Nevada is entrenched in mineral development.”

Attending the Zinke signing ceremony were representatives of Newmont Mining and Couer Mining Inc. of Nevada.

Rep. Paul Gosar, R-Ariz., the chairman of the House Natural Resources subcommittee on energy and minerals, and head of the Western Caucus, said Congress is currently reviewing changes in law to expedite production of minerals.

Rep. Dina Titus, D-Nev., said bipartisan measures have passed in previous years and could do so again.

“I am committed to encouraging environmentally sound development in the mining industry and believe Congress should have a say on change made to our nation’s mineral policies,” Titus said.

On Wednesday, President Donald Trump signed an Executive Order instructing the Interior and Defense departments to develop a strategy to reduce the nation’s vulnerability to disruptions in the distribution of critical minerals.

The order was signed after Interior and the USGS released a report identifying 23 minerals needed for manufacturing of equipment used by the military and the production of batteries and computer chips.

Zinke’s directive on Thursday orders the USGS and BLM to identify new sources of the critical minerals. It also orders those agencies to provide recommendations to streamline permitting, developing leases and increasing critical mineral discovery, production and domestic refining.

Heller said he was “thrilled” with Zinke’s directive because Nevada and other Western states are so critical to mineral production.

“We produce 20 minerals that are essential to our everyday lives, including copper, lithium and aggregates,” he said. “We use those minerals to help us do things like build roads and electric cars.”

Zinke said critical mineral deposits also are located in states in the middle of the country.

He said Canadian mapping has shown deposits in that country that are likely to extend into the United States, which has never conducted extensive research to identify the location of the resources.