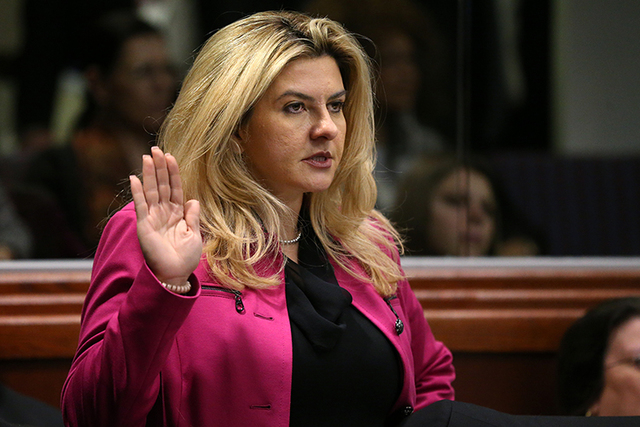 CARSON CITY — The Nevada Assembly minority leader called on a GOP assemblywoman to apologize for comments she made in The New York times about rape, concealed weapons and women on college campuses.

Assemblywoman Michele Fiore, a conservative Las Vegas Republican, talked about her bill that would allow people with concealed weapons permits to carry firearms on Nevada campuses.

“If these young, hot little girls on campus have a firearm, I wonder how many men will want to assault them,” Fiore was quoted as saying. “The sexual assaults that are occurring would go down once these sexual predators get a bullet in their head.”

“It is beyond unfortunate that Michele Fiore’s response to sexual assault on our campuses is a Rambo-like mentality,” Kirkpatrick said. “We live in the 21st century where women are business leaders, political leaders, mothers and friends that shouldn’t be objectified.

“To claim that sexual assault is only happening to ‘young, hot little girls’ and that arming people can alleviate this problem is a false narrative,” Kirkpatrick said, adding that legislators should not encourage “shootout at the OK Corral fantasies.”

“Sexual assault is never the fault of the victim under any circumstance,” said Daniele Dreitzer, executive director of Rape Crisis Center. She called Fiore’s characterization of women “demeaning and consistent with victim blaming.”

“While we recognize the magnitude of the issue of sexual assault on college campuses, violence is never an answer to violence,” Dreitzer said.

On her website, Fiore was non-apologetic and reaffirmed her comments.

“That may not be the most eloquent way to phrase it,” she wrote. “However, I stand wholeheartedly by that sentiments because I want every citizen, whether they’re on a college campus or not, to have the right to defend him or herself from sexual assault.”

Fiore is the main sponsor of a bill introduced last week that would allow people with concealed weapons permits to take their firearms onto the state’s college campuses. Assembly Bill 148 would also allow concealed weapons permit holders to have guns in other public buildings with some exceptions, as well as unsecured areas of airports.

It will be the third attempt to get the “campus carry” bill through the Nevada Legislature. Supporters said the measure could succeed with Republicans in control of both the Senate and Assembly.

Similar bills failed in 2011 and 2013 when Democrats held the majority in both chambers.