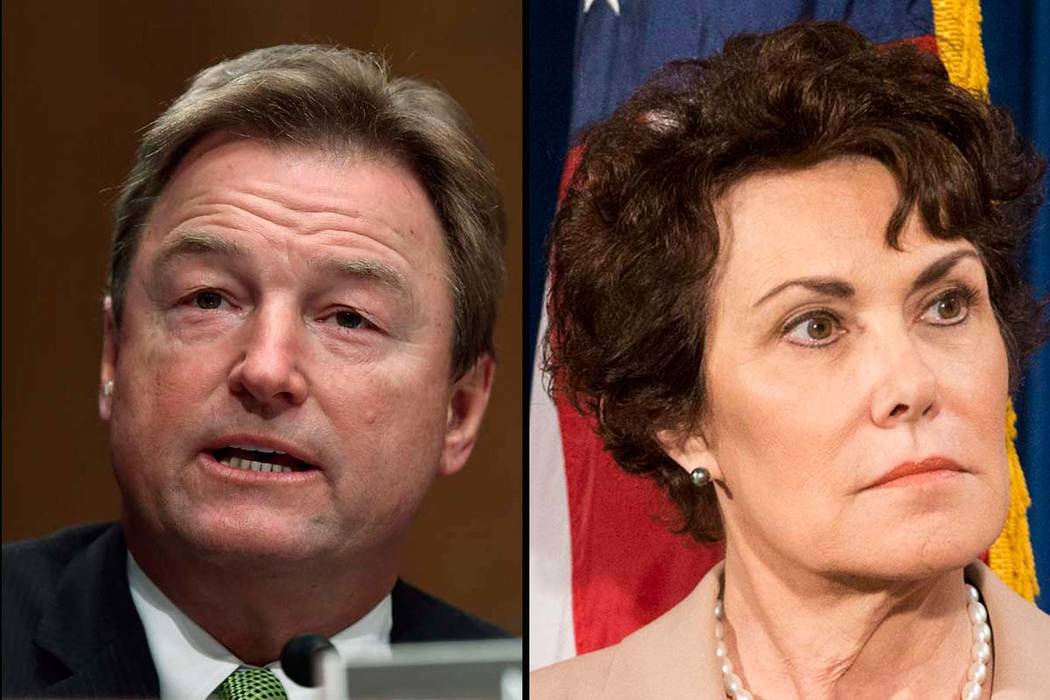 WASHINGTON — National attention is focused on the U.S. Senate race in Nevada and the first quarter of fundraising, which closes Saturday, will provide the first measuring stick of the strength of the candidates that appear headed to a fall showdown.

President Donald Trump reshaped the Nevada senate race earlier this month when he nudged GOP challenger Danny Tarkanian out of a primary battle with Republican Sen. Dean Heller, clearing the way for the incumbent to battle Rep. Jacky Rosen, a Democrat, in a state Hillary Clinton won in 2016.

“Clearing the primary for Sen. Heller was crucial” to Republican efforts to hold the Senate seat, said Matt Mackowiak, a GOP political consultant not involved in the Nevada race.

“It means he will avoid a costly, unpleasant and uncertain primary that would have drained his cash on hand, pulled him to the right and increased his negatives,” Mackowiak said.

Heller can now focus on his battle with Rosen, who demonstrated in the last quarter that she will be a formidable fundraiser.

Rosen outraised Heller nearly 2-to-1 at the end of last year, when many Republicans posted low receipts. She raised $1.5 million, he raised $823,721. But Heller stills holds an advantage in cash on hand, with $4.2 million to Rosen’s $1.8 million.

The candidates have until midnight Saturday for fundraising in the first quarter of 2018. They have until April 15 to report their campaign contributions, loans and spending to the Federal Election Commission.

The two candidates traded barbs on social media Thursday when Heller charged that Rosen voted against tax cuts, more jobs, higher wages and a better economy and Rosen countered that Heller voted for tax breaks for his wealthy donors at the expense of working families.

Republicans passed their sweeping tax cut package at the end of the year, a legislative victory that GOP leaders are banking on to raise the campaign fortunes for their candidates this year.

After a weak fundraising report last year, “Heller is a good test case” for the argument by GOP leaders that donations will increase because of the tax cuts, said Kyle Kondik with the University of Virginia Center for Politics.

It will be important that Heller shows a robust first quarter.

“Heller is the only Clinton-state Republican senator on the ballot this year, and it’s a midterm year with an unpopular Republican president in the White House. He is probably the most vulnerable senator in the country, although his race is still a toss-up,” Kondik said.

National Democrats launched attacks on Heller for his vote to repeal the Affordable Care Act after first opposing changes to the law because Nevadans would be dropped from Medicaid coverage. He later voted for bills that Democrats said would have done just that.

Heller said he worked with colleagues on commonsense solutions to improve the health care system, giving more power to the states and repealing mandates that forced individuals to buy a product they may not want or afford.

Republicans, meanwhile, have attacked Rosen for not backing the tax-cut package that passed along party lines.

The Rosen campaign counters that she is a problem-solver who will put Nevada families ahead of partisan games.

Trump’s effort to nudge Tarkanian out of the GOP primary race was seen as a move to save Heller and Senate Republicans who hold a razor-thin 51-49 majority.

Registered Democrats slightly outnumber the percentage of Republicans in Nevada, with about 20 percent of the 1.4 million active voters declaring no partisan affiliation, according to statistics compiled by the Secretary of State.

While the numbers appear to favor Rosen, Democrats and Republicans predict a formidable contest as the parties battle for control of Congress.

“Heller starts with financial, organizational and name identification advantages, but this will be a competitive race,” Mackowiak said.

With the June 12 Nevada party primaries perfunctory contests for both candidates, the money race for the November election will be closely followed.

While some political experts will be watching where the donations come from to determine strength with grassroots support, others are focused on the cash totals that allow the candidates to control their message to voters.

“I generally just focus on cash on hand,” Kondik said. “Ultimately, a dollar is a dollar no matter where it came from.”