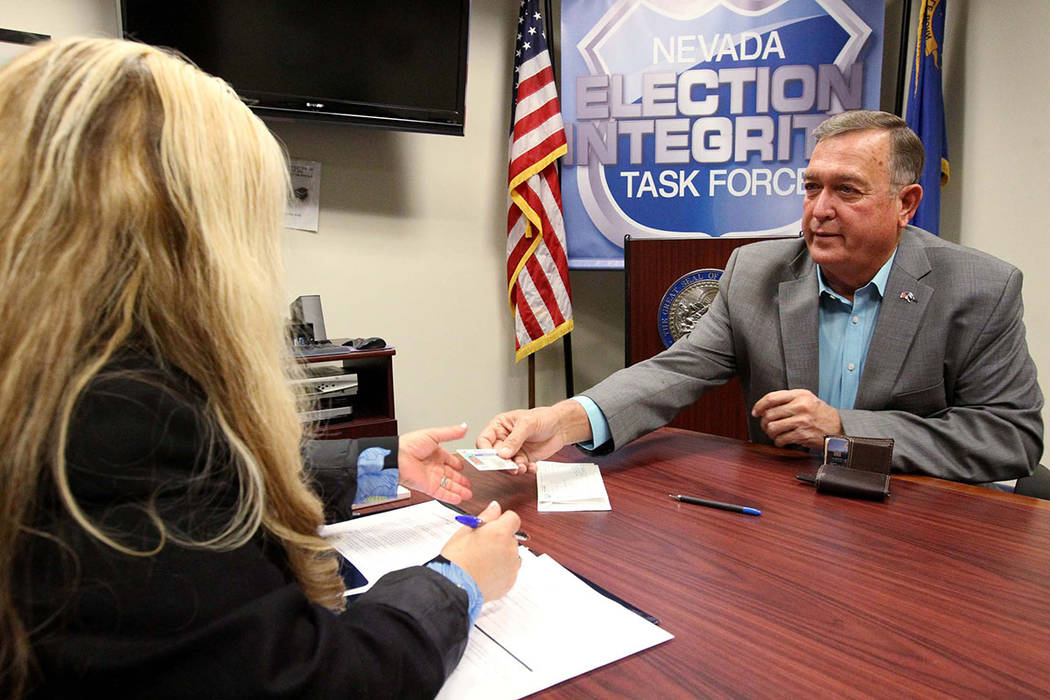 The Human Rights Campaign, the country’s largest LGBTQ rights advocacy group, said Hardy is “out of touch” with voters and called for him to retract his comments.

“DADT was a dark stain on our nation’s history that damaged military readiness and undermined national security,” the campaign’s Nevada state Manager Briana Escamilla said. “No person bravely serving in our nation’s military should ever have to hide who they are.”

The Democratic Congressional Campaign Committee pointed to Hardy’s silence on his own former staffer’s misconduct.

“It’s ironic that while Cresent Hardy is fighting to police the personal lives of the brave men and women serving in our military, he’s remaining conspicuously silent on the allegations of sexual misconduct plaguing his own campaign,” committee spokesman Drew Godinich said.

Hardy on Wednesday ignored questions from the Review-Journal regarding his former political adviser Benjamin Sparks, who’s been charged with domestic battery and accused of sexually enslaving his ex-fiancee.

Cortez Masto to pitch for Dems

Democrats on the 2018 ballot are getting a major boost in the dash for cash.

“The Senator will continue to build and strengthen Nevada’s diverse and active Democratic Party, invigorate voter registration efforts throughout the state and ensure democratic candidates up and down the ballot win in November,” said Tyler Langdon, the campaign’s senior deputy national finance director.

State Democratic Party leaders said the money will go toward the hiring of more organizers, construction of data platforms and implementation of voter registration drives.

“We are thrilled by Sen. Cortez Masto’s investment in the state party’s work to turn Nevada blue this year,” said Alana Mounce, the party’s executive director. “Her support shows a commitment to strengthening our already active and robust state party so that we can build off our tremendous success from last cycle.”

The ads highlight how Rosen worked as a waitress, became the first in her family to graduate college and excelled in the technology industry. The ads also focus on Rosen’s support of “Dreamers,” young immigrants who were brought into the country illegally as children.

“In Congress, she didn’t back down,” the ad says. “She voted against Trump to protect Dreamers.”

The 30-second and 15-second ads are part of a six-figure ad buy and will run in Spanish and English on websites such as El Tiempo and El Mundo.

— The Review-Journal wants to partner with a bipartisan panel of readers to determine the stories we write and the questions we ask the candidates.

If you would like to take part in a series of up to six roundtable discussions before and after the primary and general elections, contact Rob Johnson at rjohnson@reviewjournal.com or 702-383-0290.

— The Battleborn Conservative Women PAC is hosting a mixer for people to meet candidates and elected officials. The event is from 6 to 8 p.m. Tuesday at Pho 87, at 3620 S. Jones Blvd. Cost is $25. For tickets, go to www.bbcwcandidatemixer.eventbrite.com.

5
I-15 northbound reopened near Mesquite after pedestrian killed