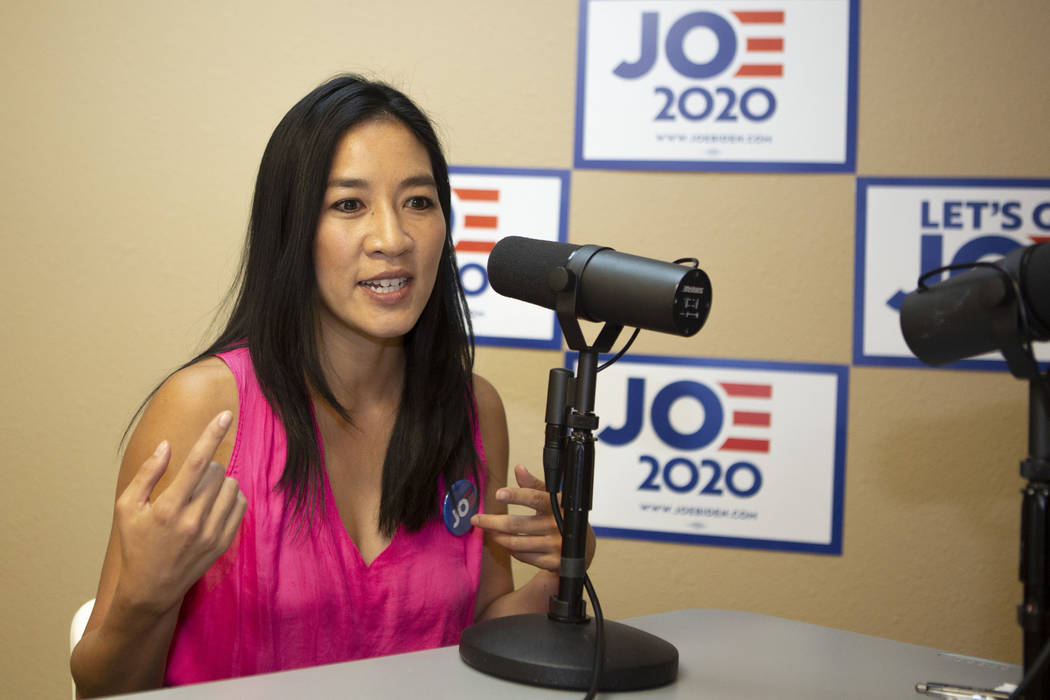 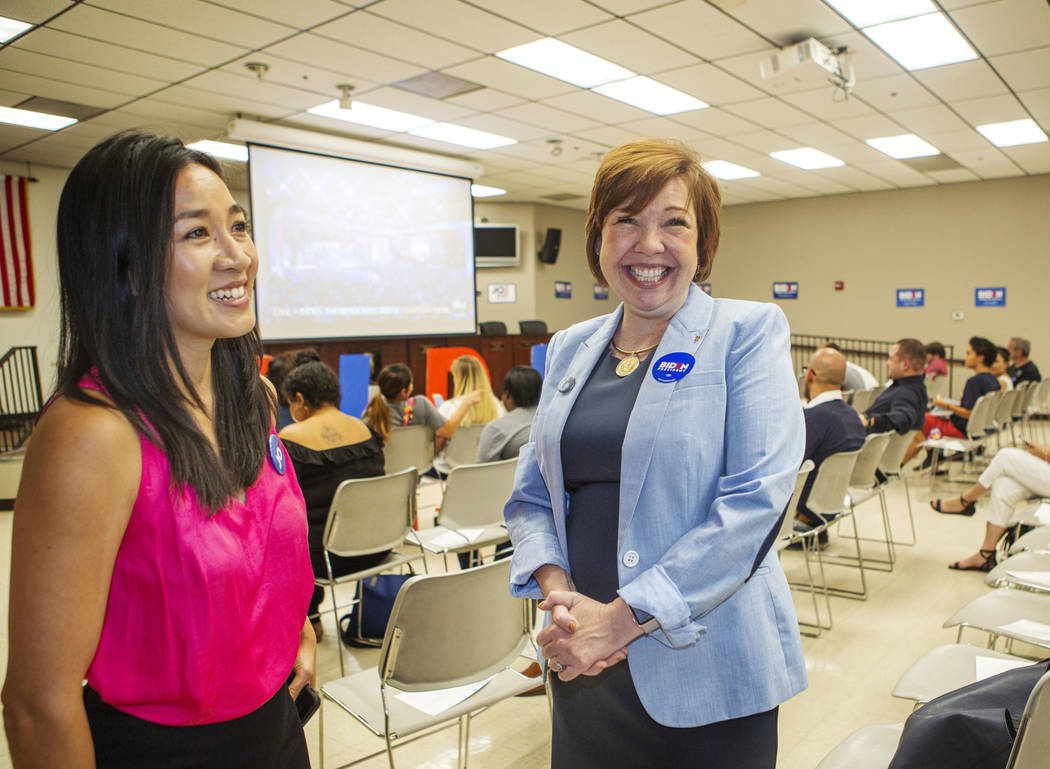 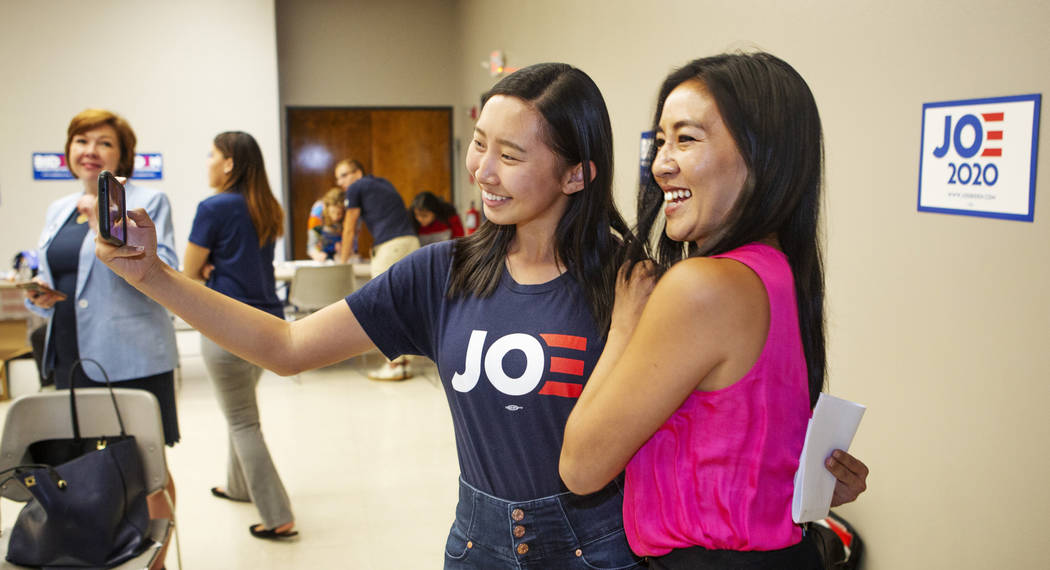 Some days may be more eventful than others for the growing Nevada staff of former vice president and 2020 Democratic presidential hopeful Joe Biden, but the young group looks to find purpose in all tasks. Many are recent college graduates or staffers working their second or third election.

They are ready to discuss Biden’s life story or policy positions with seniors, college students and anyone else who could be interested in caucusing for the former vice president in February. But they also know someone needs to paint the signs and set up the tables.

There is a rugged pragmatism to some of Biden’s Las Vegas staffers and volunteers. He is a great man, they say, but he’s also the guy who can best serve the primary goal: unseating President Donald Trump.

“After graduation, I really wanted to do everything I possibly could to get Trump out of the White House,” organizer Jami Vines, a recent graduate of a Texas art school, said Thursday at the campaign’s Las Vegas headquarters. “And Joe Biden seemed like the man to, you know, get that done.”

Kwan, herself a national Biden staffer after serving as an envoy and adviser under the Bush and Obama administrations, has an eye on removing Trump, but her primary focus is building up the former vice president.

“There’s no doubt in my mind that he will stand up to bullies and fight in our best interests,” Kwan said in an interview with the Review-Journal. “It’s fighting for the American dream for everyone. Equality across the board, not just the top 1 percent.”

Her figure skating career made her a household name, but Kwan has been politically involved for more than a decade.

She began as a public diplomacy envoy for the United States in 2006 before transitioning into a senior advisory role in the State Department under former President Barack Obama.

Kwan was a surrogate for former Secretary of State Hillary Clinton during her unsuccessful 2016 presidential bid and now serves on Biden’s campaign as director of surrogates. Her role is to coordinate campaign appearances for Biden’s most noteworthy endorsers.

She never expected to get into politics.

From ages 5 to 26, she had a singular focus on skating. After retiring, she bounced around college majors before deciding on international relations, earning a master’s degree from Tufts University. She found herself sinking deeper and deeper into political involvement as her role with the State Department grew.

She returned to a college campus Thursday, posing for selfies with UNLV students — some avowed figure skating fans, others not so much — as part of the campaign’s usual efforts.

Jennifer Sosa, Biden’s Nevada organizing director, said Kwan helped wrangle more than 100 commitments to caucus on behalf of Biden. Sosa said that in a little less than a month of daily campaigning on the Las Vegas and Reno campuses, they had previously collected about 1,000 commitments in all.

Kwan also held a number of meetings and discussions with Biden staffers and interested voters before briefly speaking at the campaign’s Las Vegas debate watch party.

She said these conversations focused on why she supports Biden: his 49 years of public service, the work done to pass the Affordable Care Act, fighting the National Rifle Association while supporting an assault rifle ban in the 1990s.

For her, one key reason for helping to organize a campaign for Biden and against Trump is immigration. Her parents emigrated from Hong Kong “with only enough money to pay for the ticket, fighting for that American dream.”

She said the conversations she’s had in foreign countries under the Trump administration have noticeably differed from those of her previous decade as an envoy.

“It’s tough because when people talk about where we are now, it’s ‘Oh, your president said this,’” she said with a groan. “And it’s frightening. It’s also (that) diplomacy is a real tool in our relationships with other countries. I think looking at the last 970 days … we can do so much better. And our relationships with our allies could be a lot stronger.”

As Kwan made the selfie rounds at UNLV, first-time Biden volunteer Katherine Jones was learning the ropes of approaching her classmates for caucus commitments.

Jones, 18, was unable to participate in the last presidential election. She decided as a high school student to join a 2020 campaign. As other candidates announced, she waited for Biden, whom she said she liked from his time with Obama.

“He’s the best chance to win the election,” Jones said. “The other candidates are very liberal. … I am not sure they could bring in the vote like Biden, who is more moderate.”

During a campaign speech at a Nevada Democratic Party fundraiser this summer, Biden was pressed on how he planned to appeal to young voters in the way his rival, Sen. Bernie Sanders, does. He bristled at the question, saying he does just as well with young people as anyone.

“As young people get more educated, we have differences of opinion just like anyone else” she said. “This is the most diverse campus in the country, and we gravitate to different things.”

She continued: “Hip and cool isn’t all of it. A president you can have a beer with is neat. A president who will change politics is better.”

Back at the campaign’s Las Vegas headquarters, a handful of staffers shared their reasons for backing Biden. The campaign counts 34 staffers in Nevada so far, with 25 more coming in the next few months.

Nic Ciccone, who organizes the campaign’s college campus efforts, said he was born not breathing. Had it not been for the Affordable Care Act, his parents would have faced immense struggle. He believes Biden will strengthen and protect the act.

Vedant Patel, the spokesman for the Nevada campaign, said many college students and recent graduates are thankful for Biden’s work on the Affordable Care Act, which allows them to remain on their parents’ insurance until they turn 26.

“It’s one less thing to worry about,” Patel said. “And the vice president fought for that.”

Organizer Charlie Bulman is a longtime Biden fan who was ready to stand with him if he had challenged Clinton in the 2016 primary. He believes Biden is the best candidate to tackle climate change.

Vines, the organizer from Texas, said people are “tired of the chaos” of a Trump news cycle that changes every five minutes.

Krystal Sun, the organizing director for North Las Vegas, said she “could not fathom” a Trump victory in 2016 as she attended college in Los Angeles. When Trump won, she gave up her career goal of becoming a teacher to work in politics.

“I don’t want America to be the laughingstock of the world,” Sun said.

Sun also has a personal goal for the 2020 campaign season.

Her father is an avowed Trump voter. When she told her parents she was going to work for Biden, he told her he did not agree with most of the former vice president’s policies but he respected Biden.

“I’m going to convince my dad to vote for Joe Biden in the 2020 general election,” Sun said. “And I know that my story is very common. Families everywhere are in like a weird state after the 2016 election, and they want to see a unifying figure.”