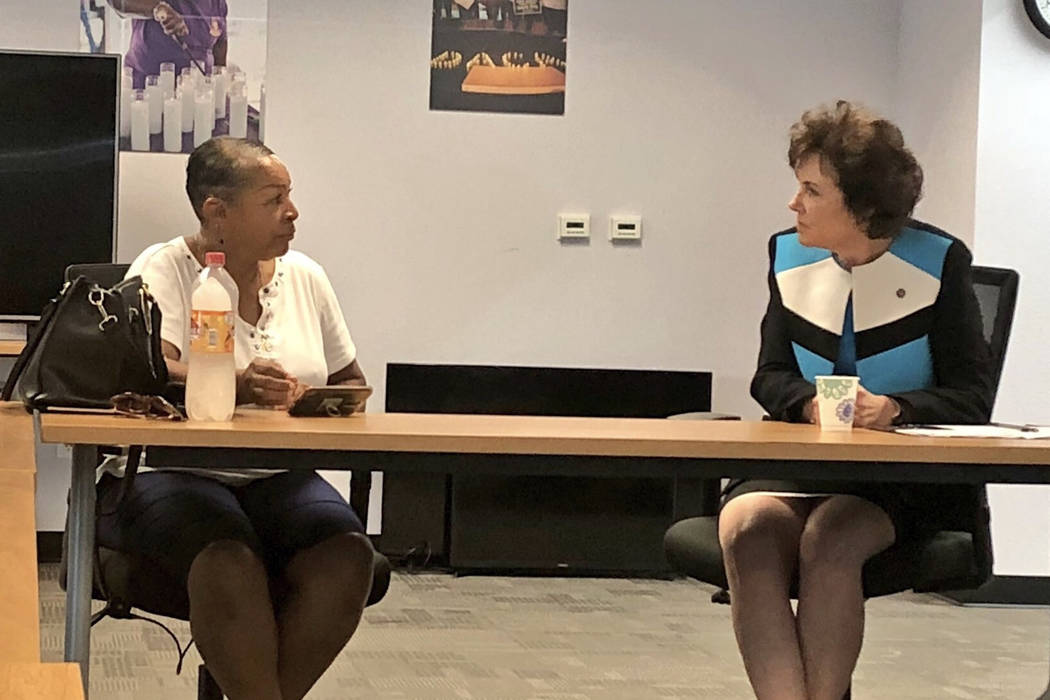 Irma Calzadillas loves her job as a private caregiver.

But earning minimum wage and driving miles to her patients’ homes is taking a toll, the mother of three told Nevada Rep. Jacky Rosen during a roundtable discussion on Tuesday.

“You learn to really care for the patients and they start to feel the same way about you,” Calzadillas told Rosen through a Spanish translator, adding that she “pleads for help” because she enjoys caring for the sick but needs to earn more to survive in Nevada.

Nevada’s minimum wage workers are at the center of the latest fight between Republican U.S. Sen. Dean Heller and Rosen, his Democratic rival.

Rosen said Heller’s suggestion to get rid of the federal minimum wage puts him out of touch with Nevadans who struggle to make ends meet.

“I think that someone who’s been a career politician for the last 25 years or so doesn’t understand anymore what it’s like to be part of a real working family,” Rosen said in an interview following the event at the offices of the Service Employees International Union, Local 1107, 2250 S. Rancho Drive. “Does he sit at roundtables like this? Does he listen to these stories? Does he go visit these places?”

Rosen on Tuesday shared her personal struggles with caring for sick parents and in-laws, calling the health care providers who helped her family “angels” who deserve to earn enough money to live comfortably.

“It’s important that we treat everyone with the dignity and decency that they deserve, and part of that is having a livable wage,” Rosen said.

“There’s no mileage, there’s no medical (insurance), there’s no safety net for if something happens to my parents and I don’t go to work that day,” Kismet Evans, a nonprofit leader who moved to Nevada to care for her ailing parents, told Rosen. “Fighting for $15 is not just about the money so people can be able to pay their bills. It’s about their quality of life, too.”

The Silver State last year had 883,000 minimum wage workers, according to the Bureau of Labor Statistics. The Economic Policy Institute estimates a pay boost to $15 an hour would help an estimated 41 million American workers and directly benefit an estimated 314,000 Nevadans.

“We all know there are simply not enough jobs in Nevada and across the country that pay enough to make ends meet,” said Brian Shepherd, deputy trustee of SEIU, Local 1107. “For Sen. Heller to dismissively say we don’t need a minimum wage is really offensive.”

“What Jacky Rosen doesn’t understand is the best way to create good jobs and better wages is to create an environment where the private sector can thrive and raise salaries,” Schipper said. “Dean Heller gets that, and it’s why unions and our small business owners have endorsed him.”

Heller this week received the endorsement of Laborers Local 872, while the SEIU, Local 1107, the Nevada State Educators Association and Culinary Local 226 have backed Rosen.