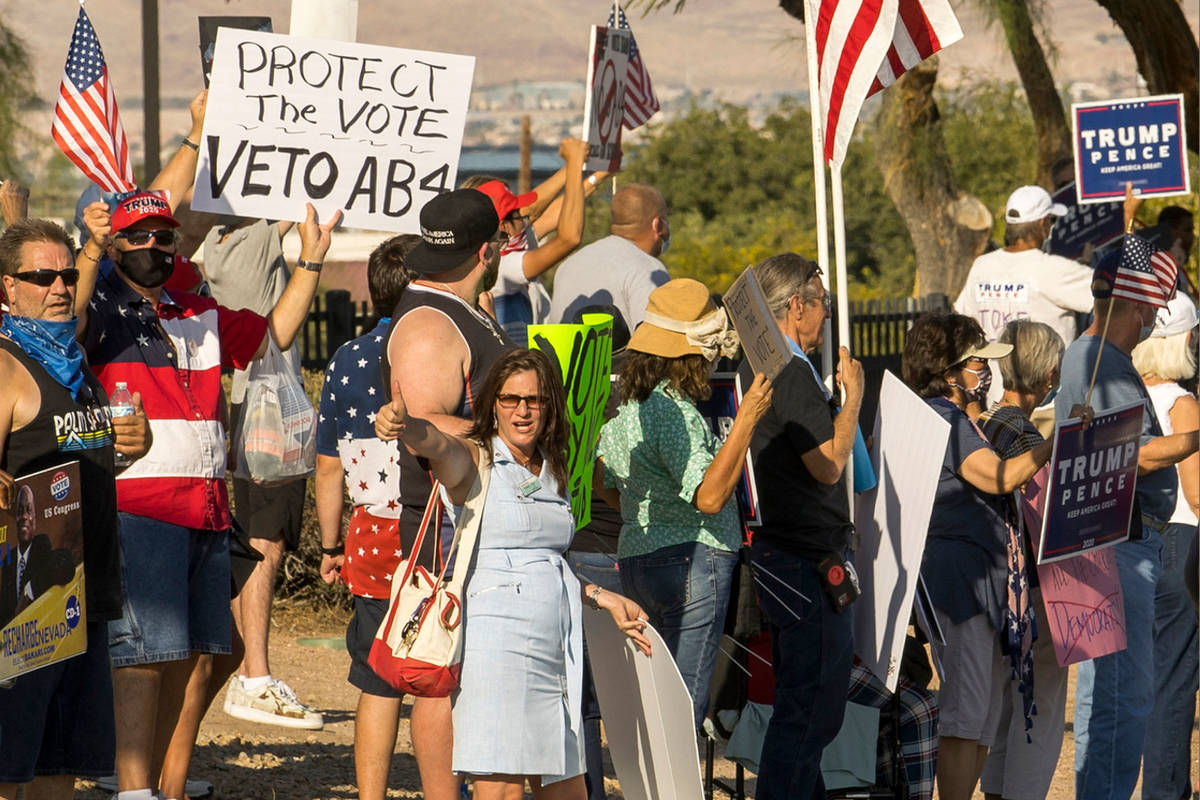 Protestors rally outside the Grant Sawyer building to voice opposition against AB4, a controversial Nevada bill that will provide for a mostly mail-in election in for November in order to curb the spread of COVID-19 on Tuesday, August 4, 2020, in Las Vegas. (L.E. Baskow/Las Vegas Review-Journal) @Left_Eye_Images 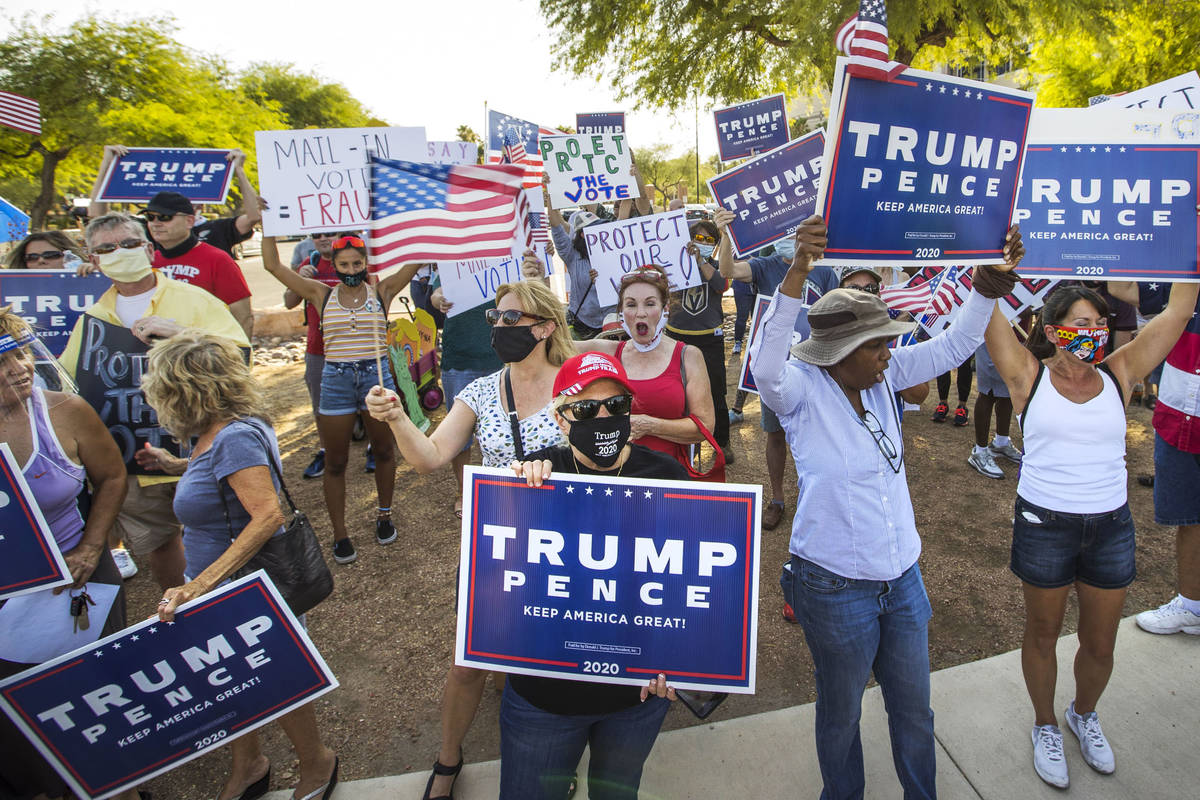 Protestors chant at the Grant Sawyer building to voice opposition against AB4, a controversial Nevada bill that will provide for a mostly mail-in election in for November in order to curb the spread of COVID-19 on Tuesday, August 4, 2020, in Las Vegas. The state Senate approved the bill on Sunday over the objections of Republicans who decried the risks of fraud and delayed counting of ballots. (L.E. Baskow/Las Vegas Review-Journal) @Left_Eye_Images 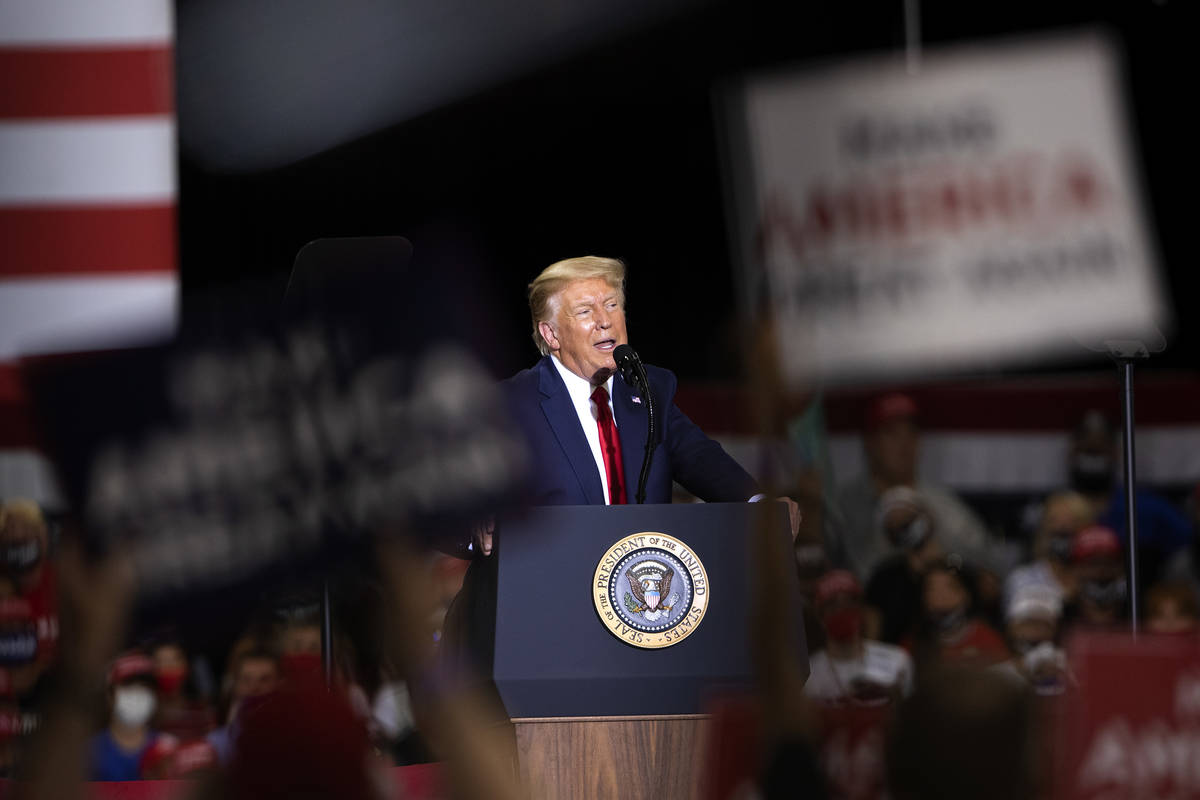 A federal judge in Las Vegas has dismissed President Donald Trump’s lawsuit against Nevada’s expanded mail-in voting and other election changes approved by the Legislature this summer, ruling that the campaign has no standing to challenge them and did not show how it would suffer actual harm.

“Although they purport to allege constitutional harms that go beyond these policy disagreements, at this juncture, plaintiffs’ allegations remain just that,” he wrote in a ruling dated Friday.

Mahan ruled that the campaign does not have standing to represent Nevada voters, only Trump and his “electoral and political goals” of re-election.

Changes enacted by the Legislature and signed by the governor modify election procedures during periods of declared emergency in Nevada, such as currently exists from COVID-19, to make it easier for people to vote without physically going to a polling place.

It creates more flexible procedures for accepting mail-in ballots, including the collection, or “harvesting,” of ballots for drop-off; and makes changes to help elections officials tabulate the vote.

As with other similar challenges to voting changes from Republican interests, the Trump campaign alleged that the changes would dilute the vote of Trump voters.

The ruling painstakingly dismantled each of the Trump campaigns arguments attacking the law. It said an injunction against the changes would not address the campaign’s issues with the discretionary authority state election officials have to establish in-person voting locations. Instead, it would “eliminate the safeguard of a minimum number of in-person voting locations from all counties.”

On another point, “Plaintiffs offer a patchwork theory of harm that does not rely on (the new law), but on the speed of the United States Postal Service, an entity out of defendant’s control,” he wrote.

Mahan also dismissed the contention that the law forces the Trump campaign to “divert resources and spend significant amounts of money” educating and encouraging voters and counteracting voter fraud.

If the Trump campaign spent no money on educating voters, “their voters would proceed to vote in-person as they overwhelmingly have in prior elections,” Mahan said.

“Not only have plaintiffs failed to allege a substantial risk of voter fraud, the State of Nevada has its own mechanisms for deterring and prosecuting voter fraud,” he wrote in his ruling.

The lawsuit named Secretary of State Barbara Cegavske as the defendant, as the state’s top elections official. Mahan granted the state’s motion to dismiss. State and national Democratic organizations and two Nevada tribal communities had intervened on the state’s side.

Republicans continued to denounce law, despite the ruling. “We are disappointed in the decision upholding the Nevada Legislature’s last minute and reckless overhaul of its electoral system and are assessing our options,” Trump Victory spokesperson Keith Schipper said in a statement.

State Democrats issued a statement of their own from party chair William McCurdy II who called the ruling “a win for democracy,” adding that Trump and Republicans had sought to limit voting in November because “Republicans will lose if more Nevadans vote in this election.”

This is a developing story. Check. back for updates.

Trump for President v Cegavske ORDER by SteveSebelius on Scribd