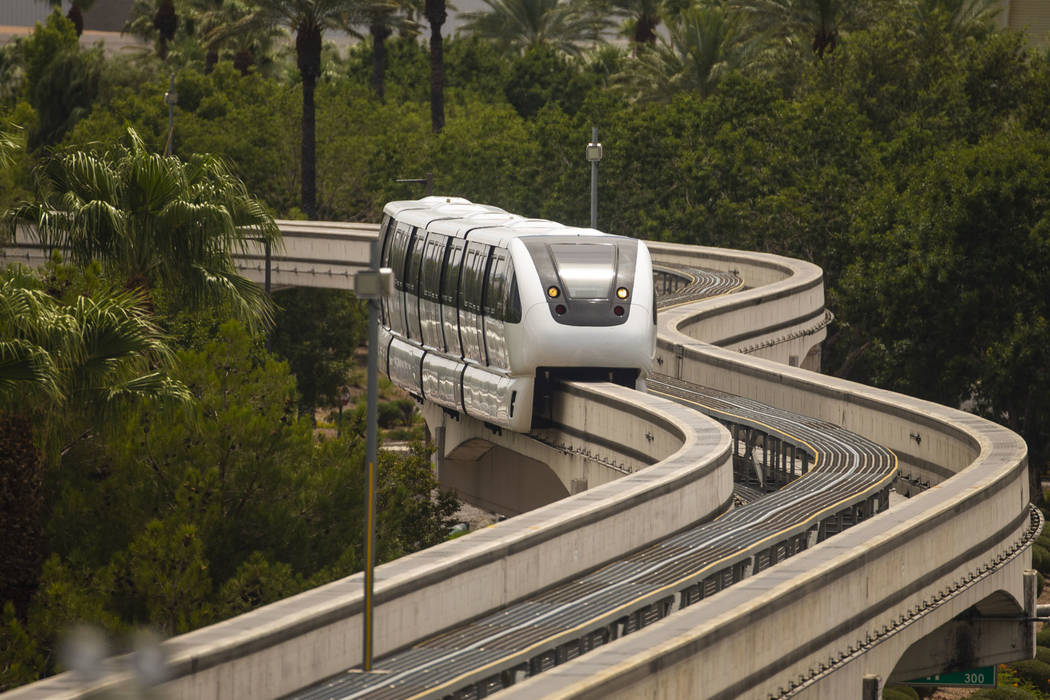 A train makes its way toward the SLS Station along the Las Vegas Monorail system on Sunday, Aug. 18, 2019, in Las Vegas. (L.E. Baskow/Las Vegas Review-Journal) @Left_Eye_Images 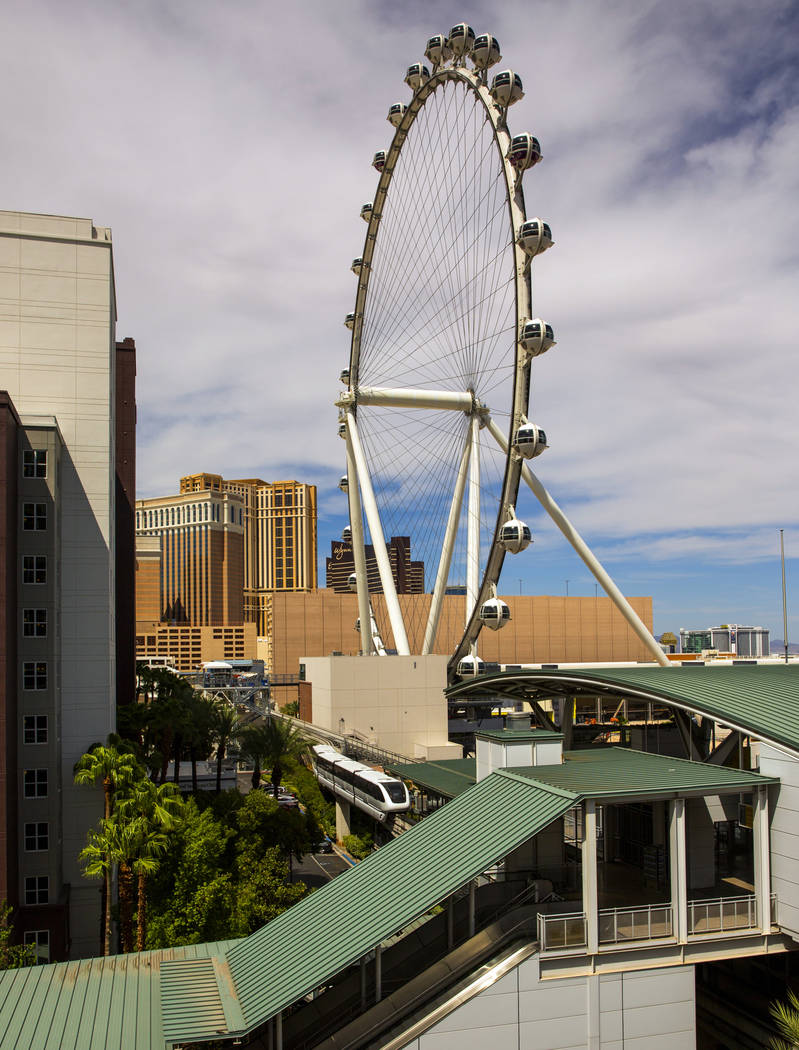 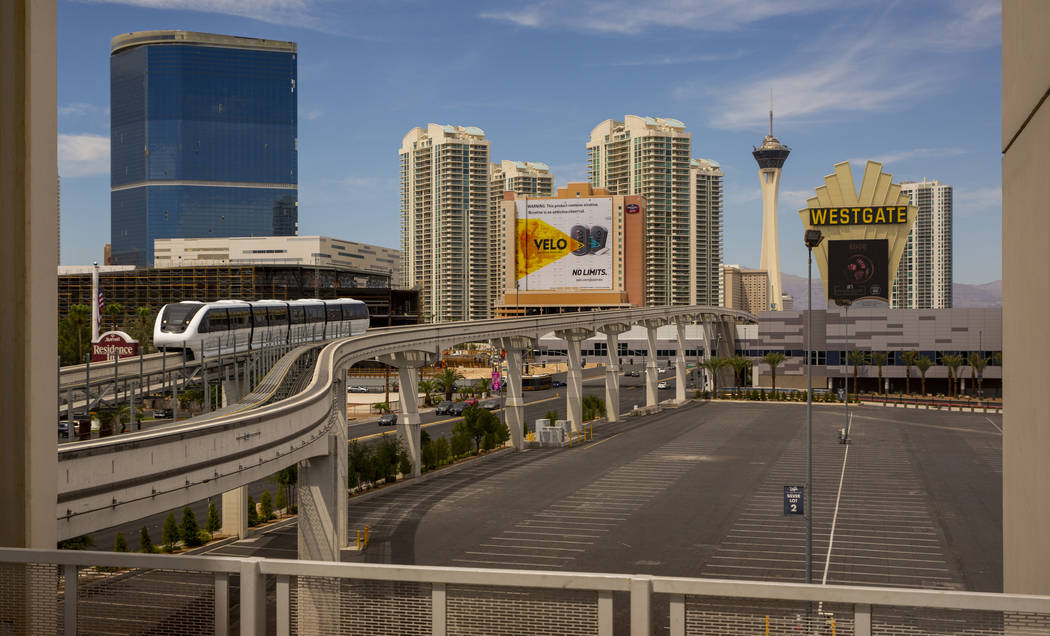 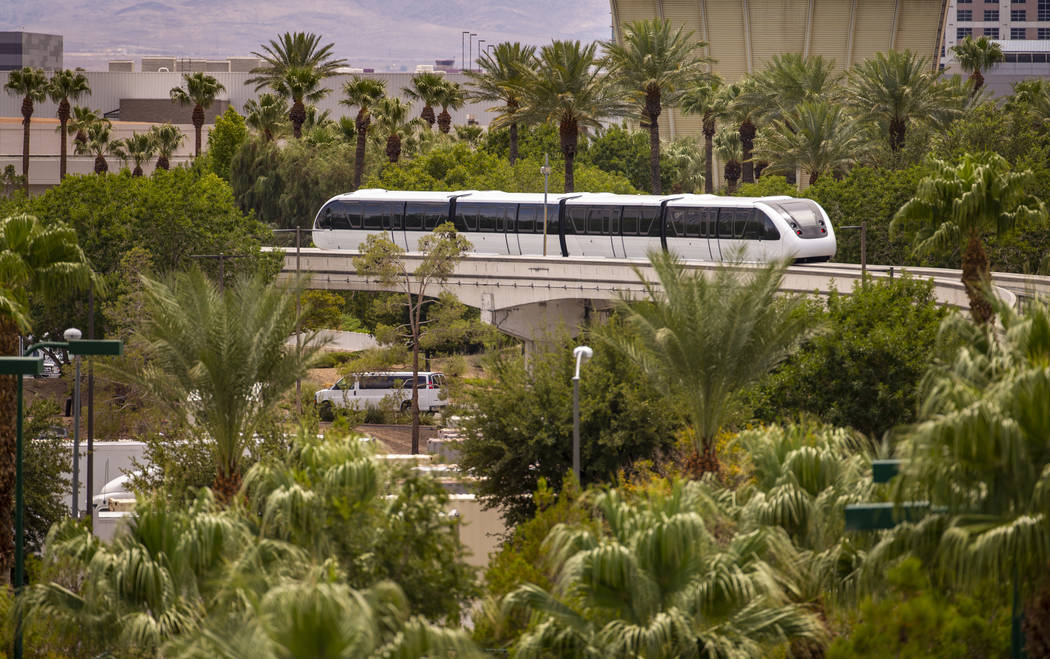 A train makes its way toward the Westgate Station along the Las Vegas Monorail system on Sunday, Aug. 18, 2019, in Las Vegas. (L.E. Baskow/Las Vegas Review-Journal) @Left_Eye_Images 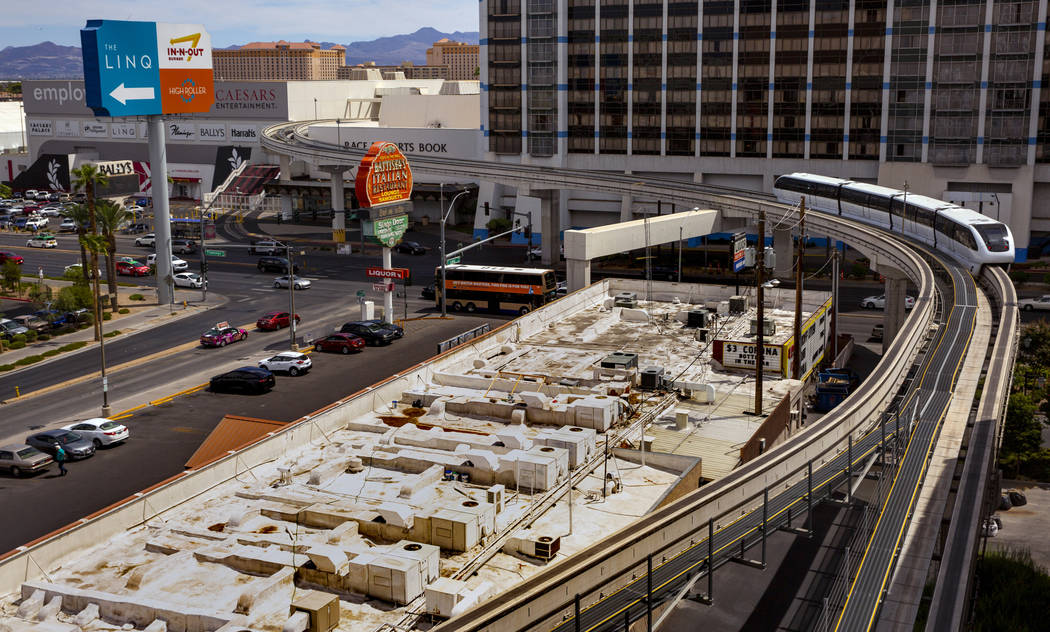 Gov. Steve Sisolak will not sign a certificate that would allow the Las Vegas Monorail Co. to secure up to $200 million in tax-exempt bonds, a decision that could derail the transit system’s plan to build two new stations on the Strip.

The Monorail Co. needs the money to pay off a recent loan of about $13 million and build new stops at Mandalay Bay and the forthcoming MSG Sphere at The Venetian. Since last year, lobbyists for the private nonprofit transit system have worked to get former Gov. Brian Sandoval and then Sisolak to sign a certificate approving the issuance of the 30-year bonds.

“After careful consideration, the Governor declined to sign the certificate,” Sisolak’s communications director, Ryan McInerney, wrote in an email sent to the Review-Journal on Friday evening.

McInerney did not provide details about when or why the decision was made. Monorail Co. officials could not immediately be reached for comment Friday, but President and CEO Curtis Myles said in an interview Thursday there were multiple ways the company could proceed.

“The way that we’re pursuing it with the governor … we believe it’s the best way,” he said. “Not the only way, but the best way.”

The debt would have been the largest taken on by the Monorail Co. since $650 million of state-backed bonds were issued on its behalf in 2000 to extend its route.

The Monorail Co. was seeking funding through an IRS ruling that allows nonprofits to issue tax-exempt bonds on behalf of the government, so long as certain criteria are met. One key requirement was for Sisolak to sign a certificate that would cap how much money the Monorail Co. could borrow, reapprove the nonprofit’s charter and agree that the state would take ownership of the monorail system once its debts are repaid.

The financially beleaguered Monorail Co. has spent the past two years attempting to secure funding for a mile-long extension of its track to Mandalay Bay and, more recently, to add a stop near the MSG Sphere. The two new stops have been touted as critical to improving ridership numbers and ticket sales.

But the task has proven difficult for the Monorail Co., which filed for bankruptcy in 2010 after ticket sales fell well short of expectations and the company failed to pay back $650 million of state-backed bonds.

Though ridership revenue has fallen every year since 2016, Myles said Thursday the nonprofit and an unnamed financier were confident the planned stops at Mandalay Bay and MSG Sphere would generate enough new traffic to more than pay for themselves.

“We’re only going to do it if we and our lender have a pretty high level of confidence that we’re going to be able to pay it off,” he said, adding that the monorail currently operates at an 11 to 14 percent margin.

Under the IRS ruling, the state would not have been liable for the debt if the Monorail Co. defaulted on the new bonds, said Stacey Lewis, a public finance attorney at Pacifica Law Group in Seattle.

“There is no obligation placed on taxpayers. It’s just a mechanism for meeting requirements for tax exempt financing,” she said.

Before Sisolak decided against signing the certificate, his staff received a slew of documents from the Monorail Co. to scrutinize the nonprofit’s financial health.

The records, which were obtained by the Review-Journal through a public records request, offer a glimpse into the usually tight-lipped nonprofit’s operations.

A ridership study published in June shows monorail ridership revenue has fallen every year since 2016. The study blamed the downturn on renovation projects that closed Strip hotel rooms and on a drop in tourism following the Oct. 1, 2017, mass shooting.

Ticket sales for the past two years netted about $41.5 million. That’s $2.1 million less than the Monorail Co. budgeted and almost $8.7 million less than was forecast in a ridership study published in April 2016. The study does not state the monorail system’s operating costs.

However, the study also predicts annual ridership on the existing system will be on the upswing again starting this year and grow more than 14 percent by 2025. The projections bode well for the Monorail Co., but they are tamped down from predictions made in the 2016 study.

“It is more accurate now,” Myles said of the new study.

It is unclear what the Monorail Co.’s next step will be.

Myles said the nonprofit is no longer asking the Clark County Commission to guarantee up to $135 million of hotel room tax revenue over 30 years if the monorail needed it. Two years ago he told commissioners the Monorail Co. could not secure low-interest bonds for its expansion without the commitment. On Thursday, it no longer appeared to be an insurmountable hurdle.

“It didn’t appear to be the right time for that, so we moved on,” Myles said. “We have a lender that believes in the project, they analyzed it nine ways from Sunday. They believe in the project and they clearly understand the risk they are taking and they’re willing to incrementally move things forward with this, despite what happened there.”

The Monorail Co. has a new loan of about $13 million it obtained last month to pay off maturing bonds and interest of the same amount. Details about the loan are being kept secret because of a nondisclosure agreement, Myles said.

Emails show the nonprofit hoped Sisolak would sign the certificate before a majority of the debt matured on July 15, so that the new bonds could be used to pay off the old.

Less than two weeks before the maturity date, monorail lobbyist Kris Ballard warned Sisolak’s general counsel, Brin Gibson, that the state could be forced to take ownership of the monorail system if the governor didn’t act soon. The Monorail Co. did not have the money to pay off its existing debts, and its lenders might not want the monorail track and equipment if it went bankrupt again.

“I give that result even odds given that there isn’t any way to sell the assets for use elsewhere,” Ballard wrote. “So, (the governor) could end up causing what he may be trying to avoid.”