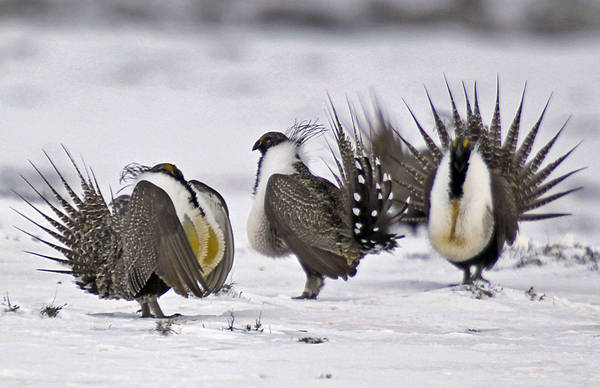 Male greater sage grouse perform mating rituals for a female grouse, not pictured, on a lake outside Walden, Colorado, April 20, 2013. In an abrupt reversal, the Pentagon now says it supports a Republican proposal in a defense policy bill that would bar the Fish and Wildlife Service from using the Endangered Species Act to protect two chicken-like birds in the western half of the U.S. (David Zalubowski/AP, File)

WASHINGTON — Lawmakers negotiating a final defense bill excluded a provision that would have prohibited the Interior Department from placing the sage grouse, in Nevada and other states, on the endangered species list for a decade.

Democrats and environmental groups claimed a victory Tuesday, but the provision was just one of many efforts by Republicans and the Trump administration to roll back protections and revise the Endangered Species Act.

Testifying before the House oversight and government subcommittee on the interior, David Eliason, president of the Public Lands Council, said Tuesday that environmental restrictions and lawsuits by environmental groups were inhibiting ranchers and causing harm to the species habitat.

In the days before the hearing, Eliason said, the Martin Fire in northern Nevada consumed 435,000 acres, nearly all of it sage grouse habitat that had not been grazed for several seasons because of a priority habitat management area designation.

Eliason said that could have been mitigated.

“The science is clear on this issue. Responsible grazing is not only compatible with sage grouse habitat, it’s beneficial,” Eliason told the panel.

Environmentalists, however, call current GOP and Trump administration efforts the largest assault on wildlife protections in 45 years since the Endangered Species Act was passed in 1973.

“The very agencies that are charged with saving endangered species are proposing to weaken the bedrock protections of the Endangered Species Act,” said Rebecca Riley, a Natural Resources Defense Council senior attorney.

Riley said the changes proposed by the Trump administration “are a short-sighted attempt to appease developers and polluters at the expense of imperiled species.”

The sage grouse provision was included in the House-passed defense bill by Rep. Rob Bishop, R-Utah, who said listing the sage grouse as an endangered species would hamper military training and inhibit readiness.

A July 17 letter urging a House-Senate conference committee to strip the provision from a final defense bill was signed by 119 House Democrats, including Nevada Reps. Dina Titus and Ruben Kihuen.

Rep. Jacky Rosen, D-Nev., a member of the House Armed Services Committee and a candidate for the Senate, did not sign the Democratic letter but voted against the sage grouse provision when the bill was before the committee.

After originally saying Bishop’s provision is unnecessary, the Pentagon said Thursday that it supported the proposal because it could help prevent any “negative readiness impacts on military facilities” that might result from a listing of the sage grouse as endangered.

Nevertheless, lawmakers on the conference committee decided not to include any of the endangered species provisions in the final version of the bill.

“We should never have to choose between national security, wildlife and public lands,” said Randi Spivak, public lands director at the Center for Biological Diversity. “But we can’t let down our guard as long as there are members of Congress willing to hasten the extinction of magnificent wildlife to appease corporate donors.”

On Thursday, the Trump administration unveiled proposals by the Interior and Commerce departments that would require economic consequences to be considered when a species is placed on the endangered list.

In addition, Republican lawmakers have filed eight to 12 bills to overhaul and modernize the Endangered Species Act and roll back land use restrictions.

House members have filed several bills that would make it easier to remove a species from the endangered list.

In 2015, the Independent Petroleum Association of America and other oil, gas, mining and timber industry groups opposed an Obama administration plan for land use restrictions in 11 Western states to protect the sage grouse’s habitat.

Habitat loss and land use restrictions have been cited as a reason that sage grouse populations have dropped from 16 million to just a couple of hundred thousand in recent decades, according to the U.S. Fish and Wildlife Service.

“The federal government’s plans would place new restrictions on industries that make up the backbone of the Western economy,” Barry Russell, IPAA president, said then. “These plans largely ignore the great strides made by state regulators, local officials, ranchers and energy developers alike to protect the sage grouse and its habitat.”

A bipartisan group of Western state governors argued then for a local- and state-based conservation effort instead of a federal plan.

Nevada Gov. Brian Sandoval, a Republican, is talking with the Trump administration, the Western Governors Association and other stakeholders to make sure any amendments to land use management plans are sound so as to prevent a listing of the sage grouse as an endangered species.

Spokeswoman Mary-Sarah Skinner said “Governor Sandoval and his staff will continue to engage, as a listing would not be good for Nevada or other Western states.”

Nevada is home to at least 40 threatened and endangered species, including the Mojave desert tortoise and the Southwestern willow flycatcher.