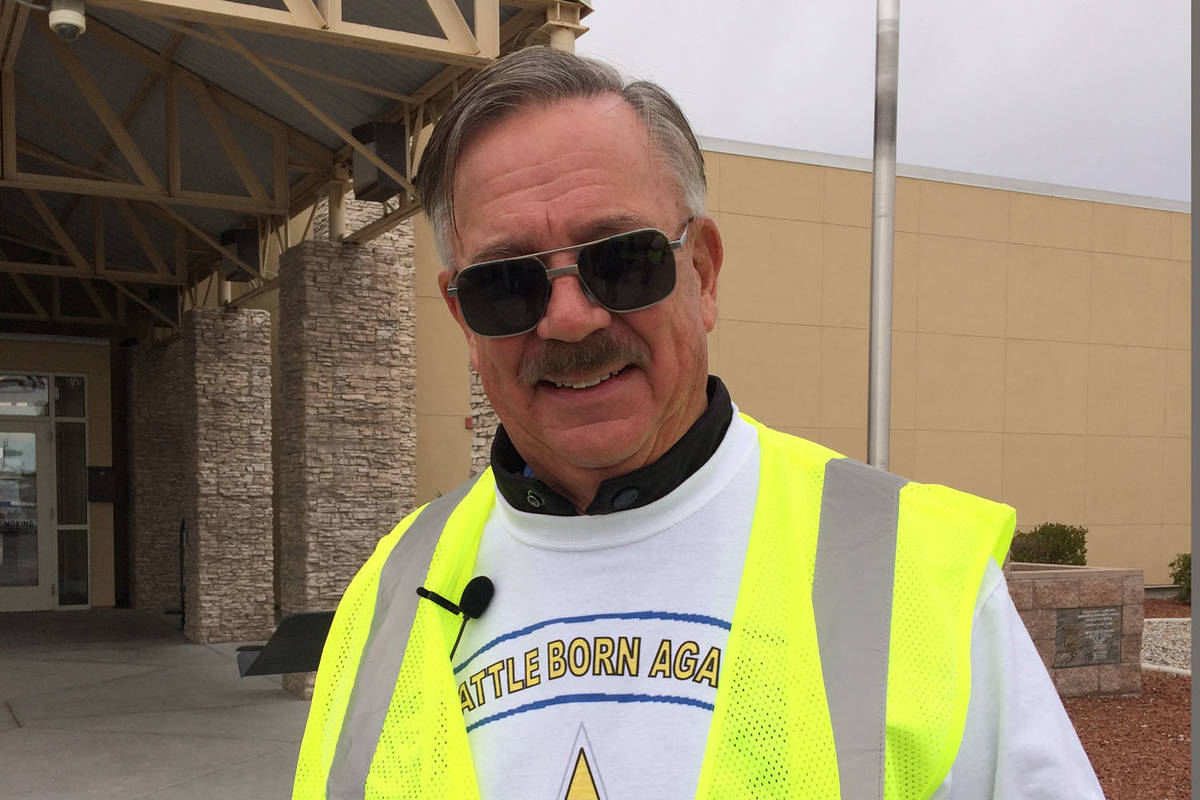 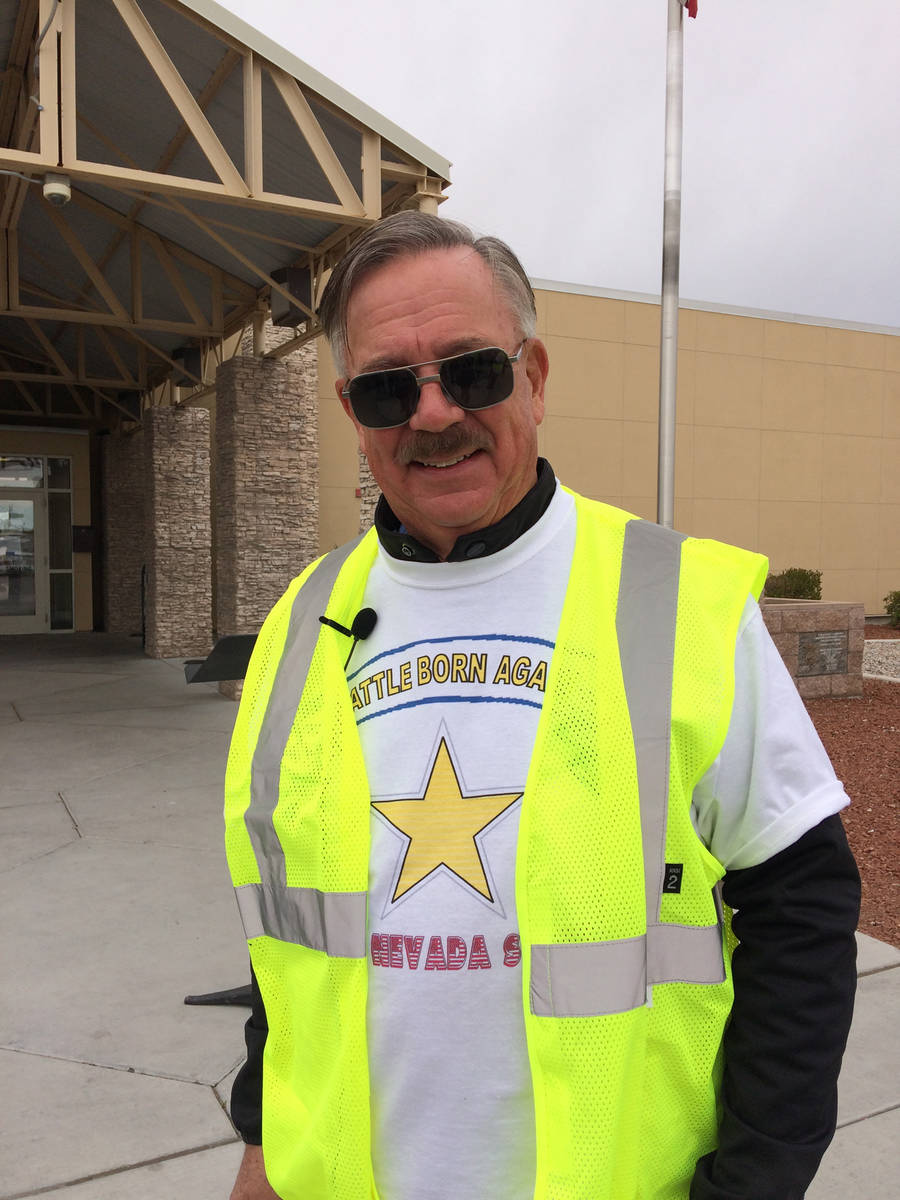 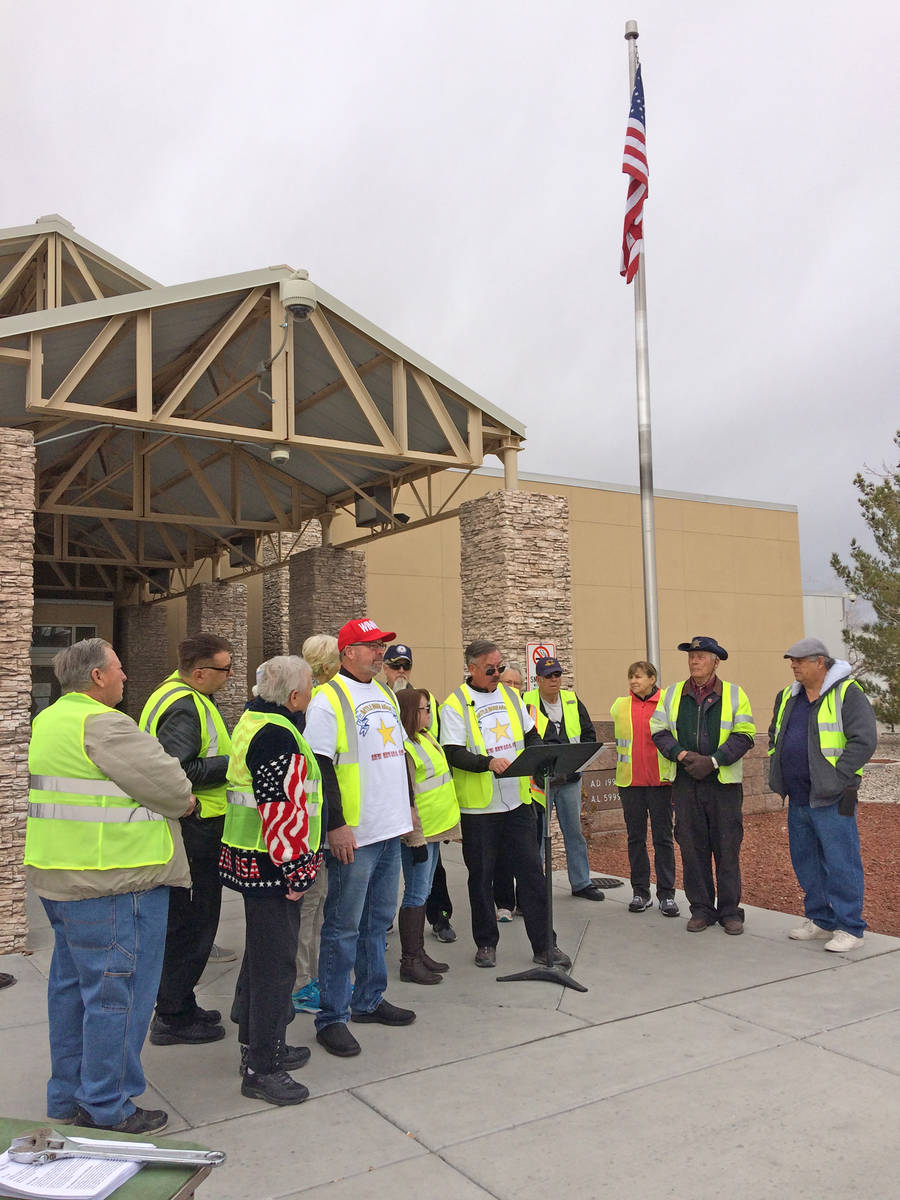 In this Jan. 21, 2019, file photo, New Nevada State Movement chairman Robert Thomas III reads the Declaration of Independence from the State of Nevada while surrounded by supporters. All were sporting "yellow vests" in the name of liberty, taking a leaf out of the book of protesters in France who have recently been demanding economic justice. (Robin Hebrock/Pahrump Valley Times)

For one retired California attorney hoping to live out his days in quiet, conservative isolation in Pahrump, Nevada’s democracy is something that must be rigorously stamped out.

“What we have here is a democracy, which our founding fathers regarded as a terrifying evil as much as a king or a dictator or a Caesar,” said Robert E. Thomas III, who made national headlines last week after filing an amicus brief on behalf of “New Nevada” and “New California” in a Texas lawsuit aimed at reversing the presidential election.

“And that’s because it’s mob rule with no protection for the minority,” Thomas continued.

For Thomas, New Nevada is not a “fake state,” as it’s been dubbed by the news media. It is “a state in formation,” with a small organization backing it that Thomas chairs.

The former prosecutor and public defender envisions a republican state of Nevada’s rural counties with Clark County cleaved from its southern border. That’s republican as in the form of government, not the party — though, also, the party.

“I went to school in Spain under Franco, and I lived in Cuba under Castro,” Thomas said. “(California Governor Gavin) Newsom and (Gov. Steve) Sisolak are the dictators of these states.”

He plans to submit a resolution to break up the state to the Legislature in 2023. Under Article 4, Section 3 of the U.S. Constitution, states created within the jurisdiction of existing states need the approval of both the the Legislature and Congress.

While the plan is politically impossible and would be of some detriment to Nevada’s rural communities, UNLV associate political science professor Rebecca Gill said, it serves as a perhaps extreme byproduct of a political trend that must be grappled with.

“We’ve created these ecosystems for information and socializing that have de-emphasized skills necessary for productive, small-deed, democratic self-governance — compromise and having a good-faith dialogue,” Gill said.

“Retreating to our own microstates would have repercussions far greater than the practical issues and political impossibility, but I understand and can appreciate the rationale behind this movement.”

Thomas and his group have held regular meetings since organizing two years ago, about a year after he moved to Pahrump with his wife. His California home was evacuated in 2017 after the Oroville Dam was damaged, and he and his friends were at constant risk from increasingly dangerous wildfires.

“Nothing burns out here in the desert,” Thomas said.

They plan to draft a constitution and include it with their resolution to the Democrat-controlled Legislature, which will almost certainly dismiss it.

In general, New Nevada would “slow the legislative process down” so that bills aren’t “rammed” through, as he said happened during a special session in August with the Republican-maligned election reforms passed in Assembly Bill 4.

It would be about the size and population of Wyoming and practice a very limited form of government.

Much of Thomas’ beef with the state does revolve around the election, hence the brief filed in what he hoped would be a Supreme Court case. Justices tossed Texas’ challenge to several swing states’ elections in short order.

Thomas said he was not allowed meaningful observation at Clark County’s election office and that “illegal aliens” were allowed to vote by the state government.

He said he witnessed several poll workers mark a ballot cast for President Donald Trump as “irregular” after pushing through several for President-elect Joe Biden. When he complained, he claimed, they were moved to another side of the room where he could not see them.

His brief made similar allegations of fraud. It lists a California bar number, which is valid, but Thomas is not licensed to practice law in Nevada, and the address he listed is for a UPS store, because of what he says are concerns over using his actual home address.

He did, however, list his cellphone number, which led to a stream of prank phone calls over last weekend.

“You can disagree, but use the King’s English and not language that would make a sailor blush,” Thomas said.

Thomas said he worked in fraud prosecution in Butte County District Attorney’s office, having worked for the Orange County (California) district attorney and the U.S. Marine Corps Judge Advocate General’s Corps prior to that. He also served briefly as public defender in Oregon.

Biden won Nevada by more than 33,000 votes, and multiple challenges by various Republican candidates including Trump were unanimously judged as lacking any credible evidence.

Gill, with UNLV, said Thomas’ plan to split the state is, constitutionally speaking, possible but impractical in a number of ways.

“As long as there is any part of Congress controlled by Democrats, this will not happen,” she said.

Even local Republicans in the Legislature would be unlikely to take up such a cause, she said, as the cash-strapped state would lose its primary tax base and the considerable tourism dollars generated in Clark County.

Still, with rural/urban and Democrat/Republican divides only deepening in Nevada and beyond, the idea should be thought of as a way to spark important conversations.

“It is interesting as a thought experiment,” Gill said.