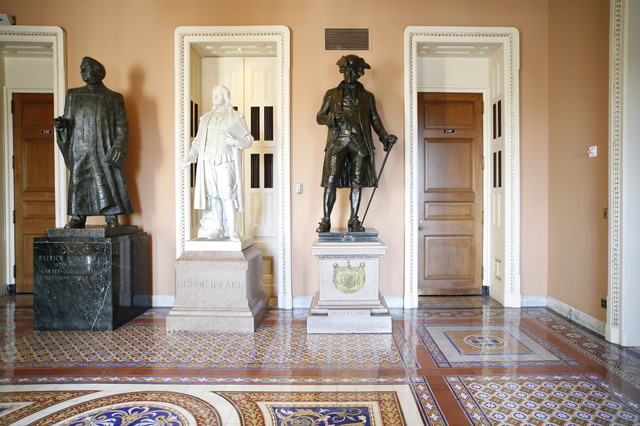 A statue of Patrick A. McCarran of Nevada, left, stands next to ones of Roger Williams of Rhode Island and John Hanson of Maryland near the entrance to the Senate floor on Capitol Hill in Washington. (J. Scott Applewhite/AP)

CARSON CITY — Nevada’s three Democratic House members have written a letter to Gov. Brian Sandoval and legislative leaders asking them to take action to provide for the removal of the statue of Patrick McCarran from the Statuary Hall in the U.S. Capitol.

While he fought for workers’ rights and helped shape the country’s aviation industry, the former U.S. senator from Nevada also left a legacy of racism, xenophobia and anti-Semitism, said the letter sent Tuesday by Reps. Dina Titus, Ruben Kihuen and Jacky Rosen.

“It is time to retire the McCarran statue to Nevada and choose a better suited individual to represent us in National Statuary Hall,” the lawmakers said in their letter to Sandoval, Senate Majority Leader Aaron Ford and Speaker Designate Jason Frierson.

In order to replace the statue, the state Legislature must pass a resolution identifying the statue to be replaced along with the name of the replacement, and several other requirements.

McCarran, a Reno native who served as a Democrat in the Senate from 1933 until his death in 1954, had his statue added to the hall in 1960. He was a fervent anti-communist who advocated for severe immigration laws.

Former U.S. Sen. Harry Reid said in 2012 that McCarran’s name should be removed from the Las Vegas airport for the same reasons.

Each state is invited to place two statues in the National Statuary Hall Collection. Nevada added its second honoree in 2005 with a statue of 19th century Northern Paiute author and educator Sarah Winnemucca.