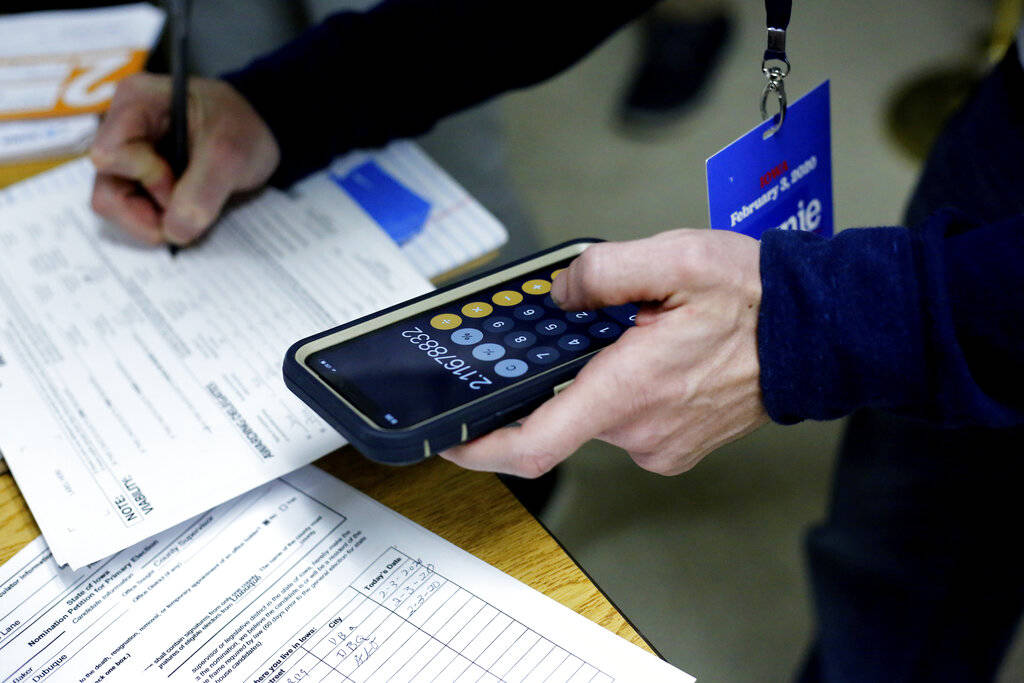 The Nevada Democratic Party appears ready to abandon an electronic system it intended to use in its upcoming presidential caucuses, after an app made by the system’s developer bedeviled the Iowa caucus and delayed results by a day.

A member of the state party’s executive board, speaking on condition of anonymity, said it seems likely Nevada’s caucuses will shift back to a paper-and-pencil model that would require manual tabulation.

Though some media outlets reported Nevada planned to use the same app that failed in Iowa, Nevada Democratic Party Chair William McCurdy II denied those reports in a statement Tuesday morning.

“NV Dems can confidently say that what happened in the Iowa caucus last night will not happen in Nevada on Feb. 22,” the statement read. “We will not be employing the same app or vendor used in the Iowa caucus. We had already developed a series of backups and redundant reporting systems, and are currently evaluating the best path forward.”

In a conference call with reporters Tuesday morning, Nevada Democratic Party Executive Director Alana Mounce stuck mostly to McCurdy’s statement, repeating parts of it word-for-word as an answer to most questions.

But Mounce confirmed that the party contracted with Shadow Inc., which developed the app used in Iowa’s Democratic caucuses, to create two apps — one for early voting Feb. 15-18 and one for caucus day. She said the apps made for Iowa and Nevada were slightly different.

According to Mounce, the decision to cut ties with Shadow was made by the state party, not the Democratic National Committee. She confirmed the choice was made because of mishaps in Iowa’s caucuses.

The Nevada party is considering every possible option, Mounce said, but it does not have a list of other possible app vendors. When asked how developing a new app could be logistically possible with early voting set to begin in days, Mounce again said all options are being evaluated and the party has a number of backup plans in place.

She said the apps originally were constructed to make the caucus process more efficient for the state’s many volunteers. She promised to update the public as soon as the party has new information.

Despite the app troubles, the party executive board member expressed confidence about the state party’s ability to pull off a successful caucus, saying, “We have the best state party in the country.”

“I am confident in the Nevada State Democratic Party, and I trust they will execute a successful caucus on Feb. 22,” he said.

Former Senate Majority Leader Harry Reid, who is largely responsible for moving Nevada’s caucus to an early spot on the Democratic Party’s nominating calendar, also tweeted out his support.

“In Nevada, we have built the best state party operation in the country,” Reid said. “I am 100 percent confident that what happened in Iowa will not happen in Nevada.”

A senior staffer at a Democratic presidential campaign in Nevada said McCurdy’s statement is not sufficient.

“I’m sure he’s right about the different vendor and all that stuff,” the staffer said. “However, the campaigns are owed something a little more substantive.”

The staffer said what happened in Iowa “validated the feelings of anyone anxious about the caucus process” in general.

“Given the toil in Iowa, (the Nevada Democratic Party) needs to give us the x, y, z of exactly what will happen on caucus day,” the staffer said, adding that many campaign workers have spent a year working toward that event.

The possibility for technical mishaps is perhaps compounded in Nevada, which will be the first state in history to allow early participation in a caucus. The party previously reported this process will also use an app pre-loaded onto tablets that will be provided to each early caucus location.

Early voting will take place at 82 locations across the state.

About 2,000 individual caucuses will be held at more than 250 Nevada locations on caucus day. Iowa, by comparison, has about 500 fewer caucus precincts.

It is unclear how early voting could work without the app’s help.

Early polling indicates as many as 60 percent of voters plan to caucus early. They will be asked to rank their top three to five choices.

In theory, if the party fell back on pencil-and-paper cards, someone at each of the 82 early sites would need to transport thousands of cards somewhere for sorting, depending on which of the state’s 2,099 precincts an early voter is assigned.

Those cards would need to be transported on caucus day to the appropriate precincts, where caucus leaders — most of whom are volunteers — would have to sort and count them in addition to their typical duties.

The party has also pledged, for the first time, to report the total number of supporters for each candidate at each caucus site, not just the delegate totals.

Nevada secretary of state records show the Nevada Democratic Party made three payments of $16,714.29 each to Shadow, one in October and two in December, for a total of $50,142.87.

According to federal records, the Nevada Democratic Party paid Shadow $58,000 for “technology services” in August.

Shadow did not immediately respond to a Review-Journal request for comment.

Both Iowa and Nevada originally hoped to hold a “virtual caucus” that would let registered voters participate from home, but that was scrapped by the Democratic National Committee in September due to cybersecurity concerns.

Rob Mason is the chief technology officer of Applause, a company that uses crowdsourcing to organize real users to stress test apps for big names like Disney, Google, Microsoft and Facebook. In an interview with the Review-Journal, Mason said what happened in Iowa was a clear example of failing to properly test an app before launch.

“A one- or two-man team can build an app, but they can’t test it for the real-world environment with a small team,” he said. “Too often that testing gets shortchanged.”

Mason said an app this important should be tested by real users with a variety of devices under a variety of naturally occurring circumstances, such as limited or no mobile or Wi-Fi connectivity.

He recommended that the Nevada Democratic Party build “a good, representative sample” by simultaneously testing its apps in rural and urban areas with as many testers as possible.

As elections move into a modern age, Mason said, it’s important that new technology be rolled out seamlessly.

“We need to build all that tech, make sure it has great security, test performance and make sure it works every time,” he said. “Otherwise, people will lose confidence and go back to the dark ages of all that crazy stuffing paper in boxes.”

Democratic presidential hopeful Tom Steyer, who held a packed campaign rally Tuesday night at Gibson Middle School, said he assumed any problems with Nevada’s caucus reporting systems will be fixed in the next few weeks.

Steyer, who appears to have done poorly in Iowa based on incomplete results released Tuesday, said he expects to fare much better in Nevada, where recent polls place him in the top five.

As other candidates favored an all-out assault on Iowa, Steyer campaigned in-person in Nevada extensively over the past few months.

He said he was not concerned about the state party’s ability to get it right in a contest that could award him several crucial delegates, adding that his job is simply to make his case to voters.

Future of the caucus system

Monday’s debacle sharpened criticism over Iowa’s first-in-the-nation positioning on the nominating calendar. Some critics, including former Housing and Urban Development Secretary Julián Castro, have called for an overhaul of the system to allow a more diverse state like Nevada to pick first.

“This is a total mess,” he said. “I respect the people of Iowa. They’ve been great, but it’s become very clear that our democracy has been misserved by a broken system.”

Many pundits and political insiders also took to Twitter on Monday night to call for an end to the caucus system as a whole.