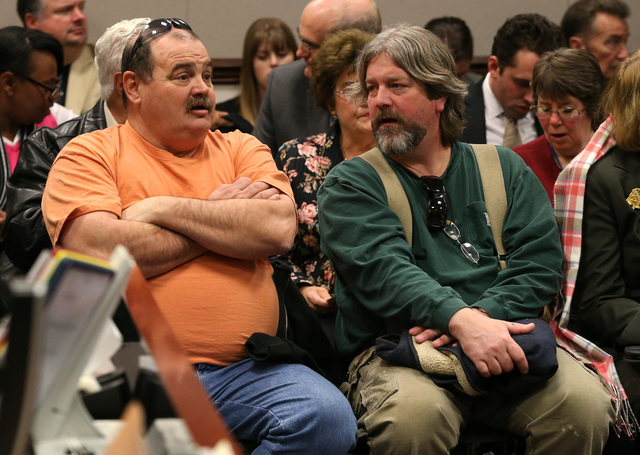 Carpenter Leroy Fulton, left, and electrical worker Gus Wallen are among nearly 400 people at a Senate hearing at the Legislative Building in Carson City, Nev., on Wednesday, Feb. 4, 2015. There was vocal opposition to a proposal that would suspend prevailing wage rules for contractors building schools. (Cathleen Allison/Las Vegas Review-Journal)

CARSON CITY — A lot of bipartisan support was expressed at a legislative hearing Wednesday for a bill that would expand rollover bond authority for local school construction without raising property taxes.

But provisions in Senate Bill 119 that would exempt school and university projects from Nevada’s prevailing wage law were a “poison pill” for many Democrats and labor groups.

The hearing on the bill in the Senate Government Affairs Committee drew a packed house of supporters and opponents, both in the capital and in a hearing room in Las Vegas. The hearing lasted for more than three hours, ending about 5:30 p.m. No action was taken on the measure by the committee.

Nevada’s prevailing wage law requires contractors who win publicly financed construction projects to pay workers according to a wage schedule established by the state’s labor commissioner. The original purpose of the law was to require local wage rates to be paid on public projects so that out-of-state competitors could not come in and undercut the local labor pool.

Critics of the law say the wages are established using a survey of construction projects that is skewed in favor of public projects, artificially inflating the wage schedule.

Kieckhefer said exempting school construction from the law would result in a free-market cost for construction, allowing districts to build more new schools and remodel more existing schools for the same amount of taxpayer money.

He said some studies show that savings on public projects could amount to 30 percent, while others suggest it could be as low as 5 percent. But the Washoe County School District needs $500 million in construction, and a 5 percent savings would mean $25 million more for schools, Kieckhefer said.

“Five percent is not insignificant,” he said. “We are spending money on behalf of taxpayers in a way that is less responsible than I would spend my own money.”

Kieckhefer also said he doubted that the bond rollover provisions, which would be able to proceed without voter approval, would pass in the Nevada Legislature without the prevailing wage elements of the bill included.

Committee Chairman Pete Goicoechea, R-Eureka, said he would not support the rollover without the prevailing wage changes, and that other Senate Republicans hold the same view.

John Madole, executive director at the Nevada Chapter Associated General Contractors, said that while Nevada’s prevailing wage law is not perfect it does help Nevada contractors get work.

The real savings if projects were exempted is probably 4 percent to 8 percent, which he acknowledged was still significant. But Madole said there are other ways to save money on public construction projects. There are schools were millions of dollars have been wasted from over-design and inefficiencies because someone wanted to build a monument, he said.

“If you want to look at those ideas, we’re happy to help you,” Madole said.

Jim McIntosh, chief financial officer for the Clark County School District, said SB119 would allow the district to raise $850 million very quickly to address school construction and renovation needs. Over 10 years, the measure would generate $3.6 billion, just over half of the $7 billion in estimated need, he said.

The district would begin by building 12 new schools, add capacity to 40 existing schools and replace two of the oldest elementary schools, Bell and Lincoln, McIntosh said. Many other renovations and technology needs would be addressed as well, he said.

District officials took no position on the prevailing wage changes, however, prompting Sen. Kelvin Atkinson, D-Las Vegas, to ask if there was no concern about the quality of construction should the projects be exempted.

Also supporting the bill was the Nevada chapter of the Associated Builders and Contractors. Mac Bybee, president and CEO, said the association does not oppose the prevailing wage law but does have concerns about how it is calculated.

Absent any reforms to the wage calculations, the association supports the exemption, he said. 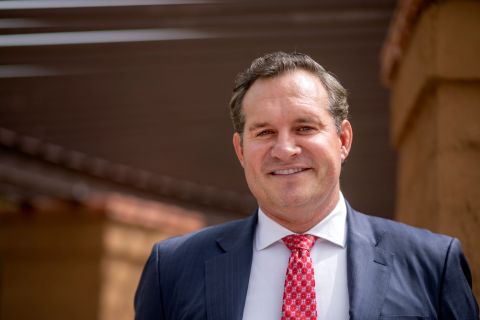