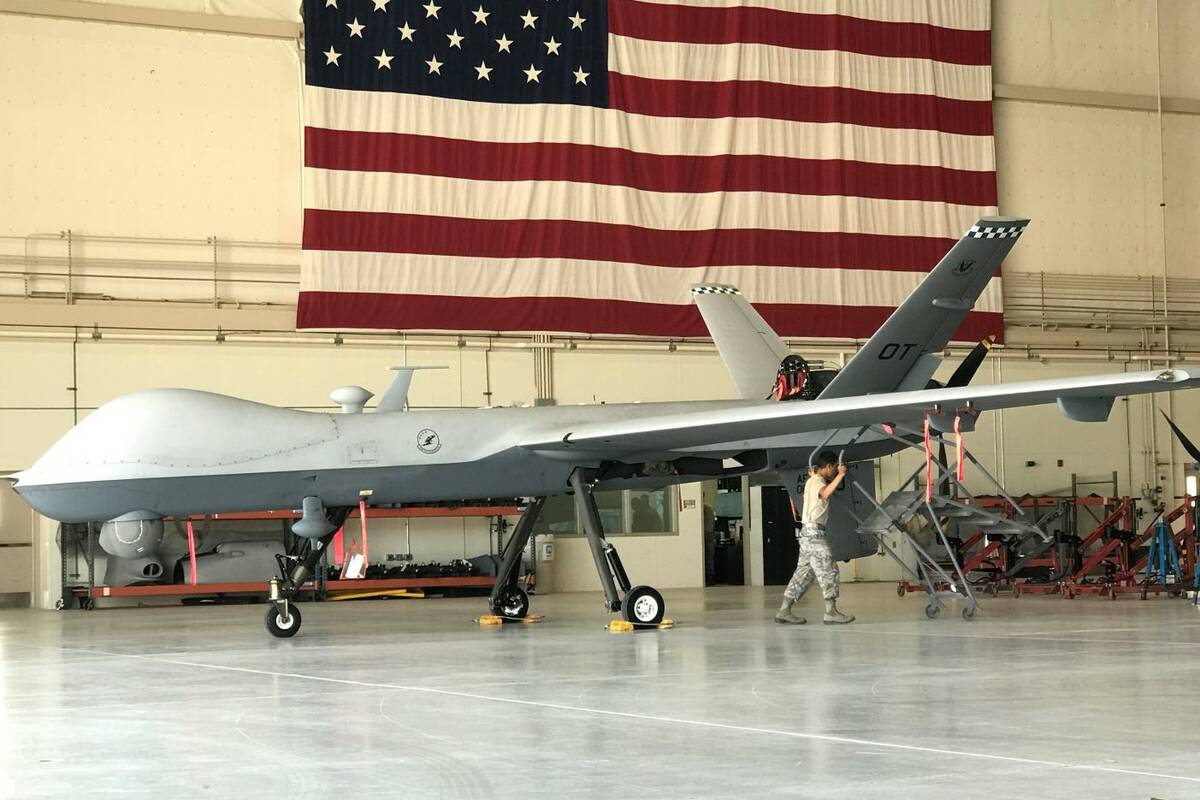 An MQ-9 Reaper drone is seen inside a hangar at Creech Air Force Base at Indian Springs in 2017. (Las Vegas Review-Journal)

WASHINGTON — A compromise $740 billion defense bill that includes a pay hike for military personnel and programs at Nevada installations was passed by the House on Tuesday following bipartisan negotiations to push the legislation to President Joe Biden’s desk before year’s end.

The legislation had been held up in the Senate, but appeared to be headed for passage there after negotiations over changes that include how the armed services prosecutes and oversees cases of sexual harassment, assault and rape.

Nevada lawmakers were instrumental in writing the annual authorization bill, which is $25 billion more than Biden or the Pentagon requested.

“I’ve worked closely with my colleagues to make sure Nevada’s priorities were included in our defense spending,” said Rep. Steven Horsford, D-Nev., a member of the House Armed Services Committee.

He defended the cost of the bill that would fund improvements and provide quality of life programs at four military and national security installations in his congressional district.

Sen. Jacky Rosen, D-Nev., a member of the Senate Armed Services Committee, tucked numerous programs into the legislation to boost protections and missions at all military installations in the state.

She said the bill includes her language to bolster cybersecurity, provide more opportunities for Army reservists “and require the disclosure of any testing for toxic chemicals at or near military installations.”

Rosen noted the bill “delivers a pay raise and expanded parental leave for our troops, and includes important provisions for Nevada’s military interests.”

The bill includes a 2.7-percent pay increase for military personnel.

There were 11,942 active-duty personnel in Nevada in fiscal year 2021, according to Department of Defense statistics. The raise would go into effect on Jan. 1, 2022.

In addition to programs of national security, the sweeping annual bill authorizes spending for domestic programs.

For Nevada, the defense bill would authorize $500 million to fund improvements at the Hawthorne Depot, $80 million for four MQ-9 Reaper drones at Creech, and $135 million for the Nevada National Security Site, which stores and maintains nuclear weapons, as well as an additional $61 million for defense environmental cleanup.

Horsford noted that including the addition of four MQ-9 Reaper drones, the total for the program that includes modernization, research, testing and evaluation would amount to $160 million spent at Creech.

Money was also included for housing assistance for airmen at bases that could include Nellis.

Rep. Dina Titus, D-Nev., included language to bolster recruitment of personnel for military purchases, as well as protections and enhancement for those with disabilities.

As part of the bipartisan, bicameral negotiations, the compromise bill does not include a requirement for women to register for the draft, which is currently required of men at age 18.

It also revamps current policies on cases of sexual harassment, removing commanding officers from overseeing cases, and creates a “cooling off” period before military brass can serve in appointed civilian positions.

Strategic spending is focused on military programs aimed at tensions involving China and the Ukraine.