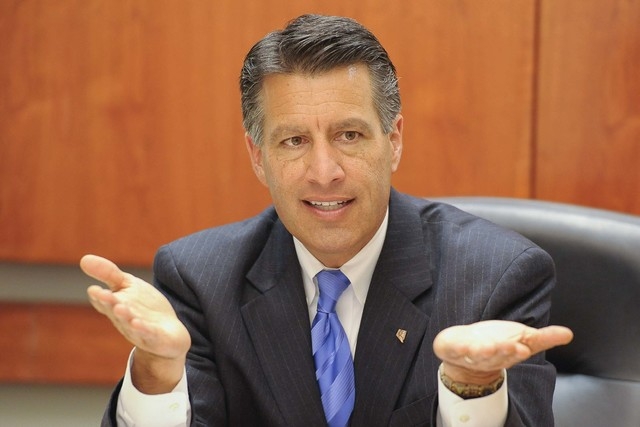 Gov. Brian Sandoval is shown here as he speaks to the Las Vegas Review-Journal editorial board on Thursday, Oct. 9, 2014. Sandoval on Monday criticized state Department of Transportation staff for failing to address stormwater issues found in an audit by a federal agency that could now lead to millions of dollars in additional costs to the state. (Mark Damon/Las Vegas Review-Journal)

CARSON CITY — Protecting prayer in the public schools. Urging Congress to transfer federal lands to the control of the state. Allowing permit holders to carry concealed weapons on college campuses.

These are just a few of the proposals being drafted into bills for the 2015 session by members of the new Republican majority of the Nevada Legislature.

Assembly Speaker-designate Ira Hansen, R-Sparks, said last week that his caucus expects to follow the lead of Gov. Brian Sandoval on much of the agenda-setting for the 2015 session. But the caucus will pursue issues important to it as well, he said.

With Republicans thwarted for years in their efforts to pursue their issues, times have changed following the Nov. 4 election that saw the GOP take control of both chambers of the Legislature and the governor’s office for the first time since 1929.

From changes to the state collective bargaining law to implementing school choice, much of the focus of the 2015 session will look vastly different from what has come before.

Collective bargaining changes have been a major issue for Republicans because of the concern it has led to excessive salaries and caused budget problems for some local governments, especially during the Great Recession.

A collective bargaining measure has been requested for the 2015 session, but there are no specifics yet. A measure introduced in 2013 to hold the line on any wage increases after labor agreements had expired but before new deals were finalized did not get a hearing.

Former GOP Gov. Jim Gibbons in 2010 unsuccessfully pushed for a ballot measure to subject public employee union negotiations to the state open meeting law. His efforts to change the process ended when he lost the Republican primary that year to Sandoval.

State Sen. Michael Roberson, R-Las Vegas, who will be the Senate majority leader in 2015, in 2011 introduced a bill that would have ended binding arbitration in collective bargaining, saying the current process was “bankrupting the state.” It did not get a hearing.

A voter ID proposal is also likely to get some attention from lawmakers. GOP Secretary of State-elect Barbara Cegavske has indicated she would not oppose such a law, which is expected to be drafted for introduction by a lawmaker.

But Assemblyman Jim Wheeler, R-Minden, said that without question improving public education is the top priority of the caucus.

“We will see what the governor wants to do,” he said. “He leads our party and our state. Parental choice is the biggest issue but not the only one. We need to reward good teachers and get rid of bad teachers. We need to see if we can streamline school district administration.

Wheeler has requested a school prayer bill, and said the motivation is to ensure that students are not punished for engaging in prayer, such as making the sign of the cross after a touchdown in a high school football game.

But Wheeler said the Assembly will hear all bills from lawmakers of both parties.

“Our new speaker will be extremely fair and open,” he said. “If bills don’t get a hearing then Nevadans are not being represented.”

Some groups will be on defense

Even so, a lot of interest groups — from labor unions, both private and public, gun control advocates and trial attorneys to name a few — will likely have to play defense next year.

State Sen. Tick Segerblom, D-Las Vegas, said he expects Democratic bills to be heard but those considered as partisan will likely not make it out of committee now that the Senate is 11-10 in favor of Republicans.

“At least in the second half (of the session) we will be playing mostly defense because our bills won’t be there,” he said. “I’m not sure how it will play out.”

But Segerblom is optimistic that a lot of legislation that has bipartisan support will see the light of day.

As chairman of the Advisory Commission on the Administration of Justice in the interim between sessions, Segerblom has pushed for a number of changes, including extending sentence credits for those convicted of category B felonies with exceptions for violent crimes and some other offenses. He has also advocated for changes to allow the parole of aging and ill inmates.

Segerblom was speaking by phone from a criminal justice conference he was attending in San Diego that featured as speakers both Grover Norquist, president of Americans for Tax Reform, and Newt Gingrich, which he said is a clear indication that the issue is important to both parties.

But other issues, such as seeking a measure to let the Legislature meet annually, or repealing a two-thirds vote requirement to raise taxes, pose a challenge, he said. The annual sessions measure, which would require a vote of the people, passed in 2013 and needs to pass again before going to the ballot. It received no GOP support in 2013.

Now that the Republicans are in the majority, maybe they will see some wisdom in both ideas, Segerblom said.

“Waiting two years to get something done in the Legislature is a disservice to the state,” he said.

Many bills Republicans are expected to pursue should be able to win passage with simple majority votes. If there are costs associated with a measure, however, Democrats in both the state Senate and Assembly will have some leverage over the fate of a measure because a two-thirds vote would be required for passage.

Any measure aimed at school choice will be controversial.

Sandoval pushed for school choice in his first term without success in a Legislature controlled by Democrats.

In the 2011 session, he announced his intention to pursue school vouchers, but the issue never got serious consideration. A full voucher program would require a time-consuming change to the state constitution, including voter approval.

In 2013, Sandoval changed his approach by seeking a bill establishing an “opportunity scholarship” giving businesses a tax credit for contributing to a scholarship fund. The money would then be distributed, on a means-tested basis, to students at low-performing schools to attend schools of their choice.

The same will be true for Second Amendment issues, which Hansen said will be a focus of his 25-member caucus.

The bill was brought in both sessions on behalf of Amanda Collins, a concealed weapons permit holder who was unarmed when she was raped by James Biela in a University of Nevada, Reno parking garage in 2007.

Assemblyman John Hambrick, R-Las Vegas, said he will bring forward his bill to make the process of qualifying for a concealed weapons permit consistent across the state. In some jurisdictions a permit holder could be in violation for placing a weapon in a glove compartment of a car rather than carrying it on his person, Hambrick said.

A permit holder from Reno could potentially be violating local rules when driving through different Southern Nevada municipalities, Hambrick said. A similar measure was introduced in the 2013 session but did not get a hearing.

“A permit should be good no matter where you go in Nevada,” he said.

Hambrick, named chairman of the Assembly Government Affairs Committee, said his bill might come to the panel he will oversee next year.

“I’m pretty sure that chairman will hear the bill,” he said with a laugh.