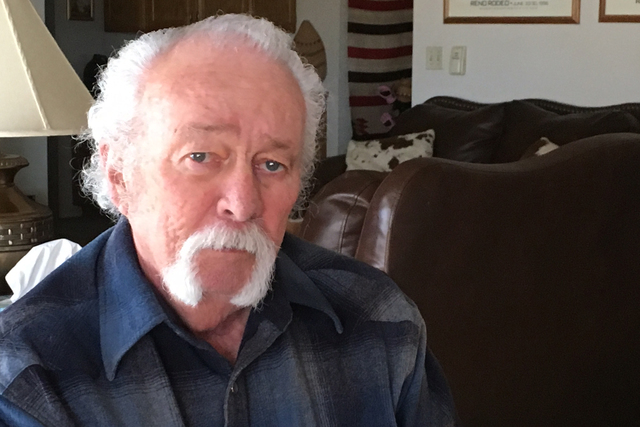 DAYTON — William Pyatt was 14 back in 1954 he sat with his mother in the jam-packed Civic Center in Hawthorne to hear then U.S. Sen. Pat McCarran speak. Moments after his remarks, the lawmaker walked down the stairs from the front of the stage and collapsed on the main floor.

McCarran had died of a heart attack at the age of 78.

Pyatt 76, said his family was friends of McCarran and that calls for the removal of his statute from the U.S. Capitol should be rejected.

Now a resident of Dayton east of Carson City, Pyatt said claims that McCarran made anti-Semitic and racist remarks should either be backed up with facts or his statue should be left in the U.S. Capitol’s Statuary Hall. McCarran, a Reno native who served as a Democrat in the Senate from 1933 until his death, had his statue added to the hall in 1960.

“Any time he was around our house he never said anything like that,” Pyatt said. “I think they should leave well enough alone.”

When former U.S. Sen. Harry Reid called for McCarran’s name to be removed from the Las Vegas airport in 2012, Pyatt said he asked the senator for information about McCarran’s inappropriate comments but received no reply.

Three Nevada lawmakers this month called for the Nevada Legislature to replace McCarran’s statue with someone more deserving.

Nevada state legislative leaders say they will pursue the request.

Pyatt, a long time Democrat who is now a Republican, said he believes Reid is behind the suggestion to replace McCarran’s statue so he can be selected instead. Pyatt has no kind words for Reid.

“I think he is the worst senator we’ve ever had,” Pyatt said. “Just because of his nature.”

Pyatt said his mother, Martha Lynn Gustafson, was heavily involved in Democratic politics and knew McCarran well in the 1940s and 1950s. She dragged Pyatt to the political event, which also featured prominent Nevada Democrats Vail Pittman and Walter Baring.

When McCarran collapsed, the audience did not immediately realize what had happened, Pyatt said. Medics were called from the nearby Hawthorne Naval Base but he could not be revived.

Pyatt said he recalled McCarran being a boisterous, larger than life type of individual.

“He carried himself very well,” Pyatt said. “I will be honest with you, when he came to the house and talked to my mother he scared the hell out of me. He was so loud and boisterous.”

McCarran was known for the issues of national defense, immigration and Communism.

In order to replace the statue, the state Legislature must pass a resolution identifying the statue to be replaced along with the name of the replacement, and several other requirements.

Each state is invited to place two statues in the National Statuary Hall Collection. Nevada added its second honoree in 2005 with a statue of 19th century Northern Paiute author and educator Sarah Winnemucca.

Pyatt said that if McCarran’s statue is replaced, he would pick John Mackay for Nevada’s second statue.

Mackay came to Virginia City after silver was discovered in 1859. He was involved in the 1873 discovery of the “big bonanza” in the mining district. The School of Mines at the University of Nevada is named in his honor. He also worked to lay telegraph cable from the U.S. to Europe.

Pyatt said that if McCarran’s statue is removed, other historic figures represented in the U.S. Capitol should be reconsidered as well.

“Robert E. Lee is in there,” he said. “George Washington is in there. They were both slave owners.”