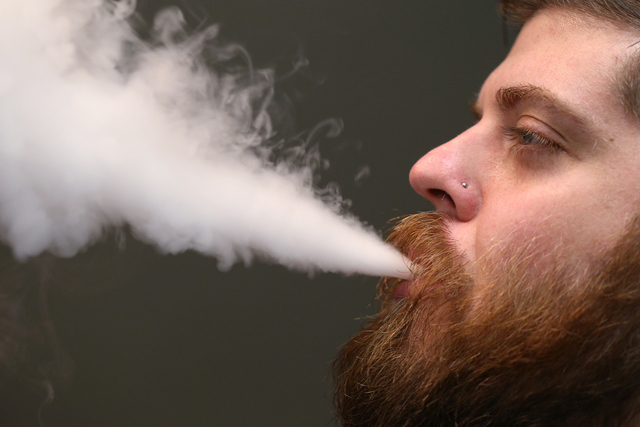 Justin McClelland smokes an e-cigarette at Nevada Vapor Supply in Carson City, Nev., on Tuesday, Jan. 27, 2015. Cigarette taxes and regulations on e-cigarettes will be part of the legislative agenda when the session convenes Monday. (Las Vegas Review-Journal/Cathleen Allison) 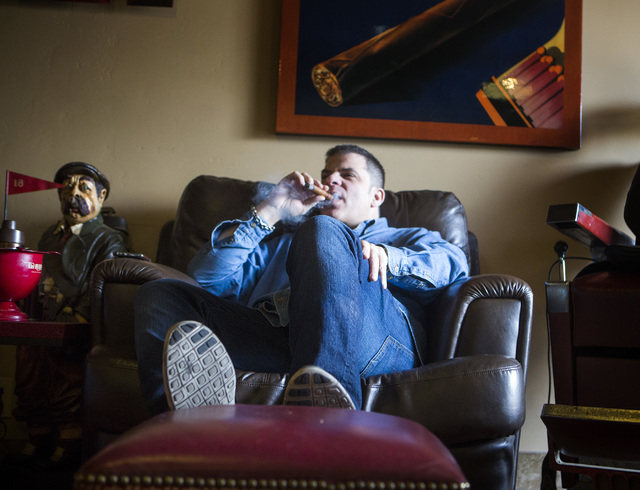 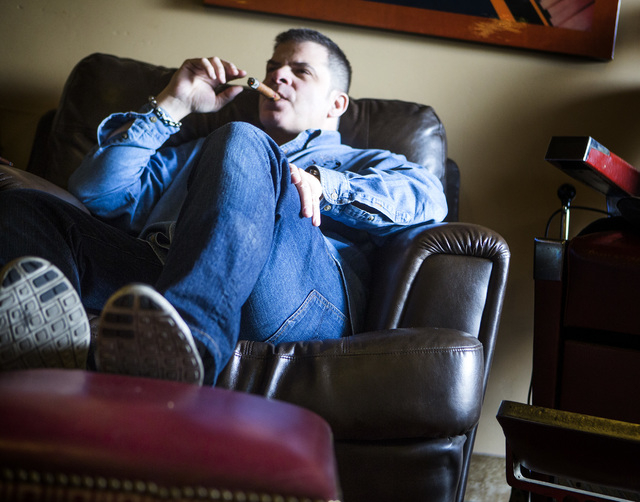 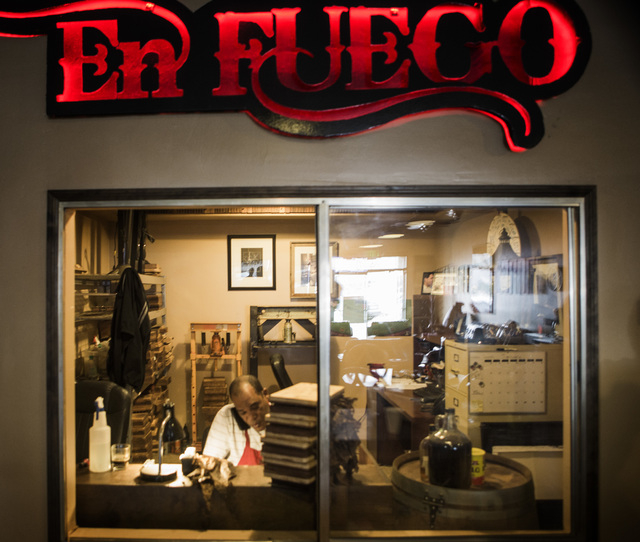 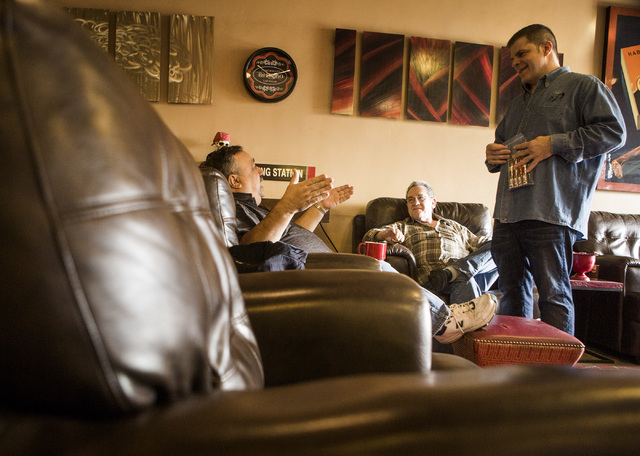 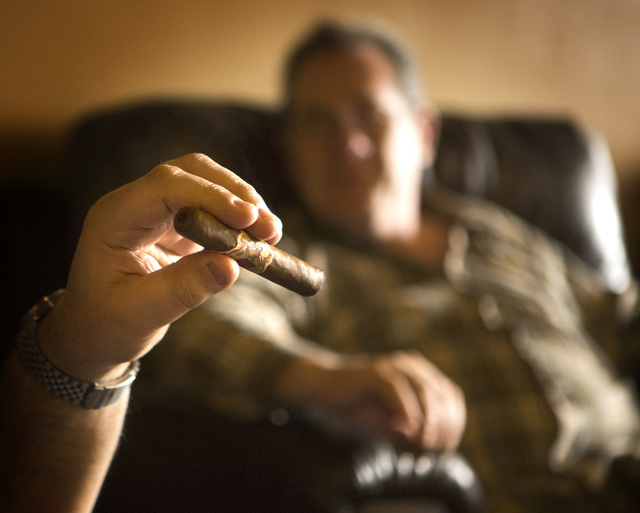 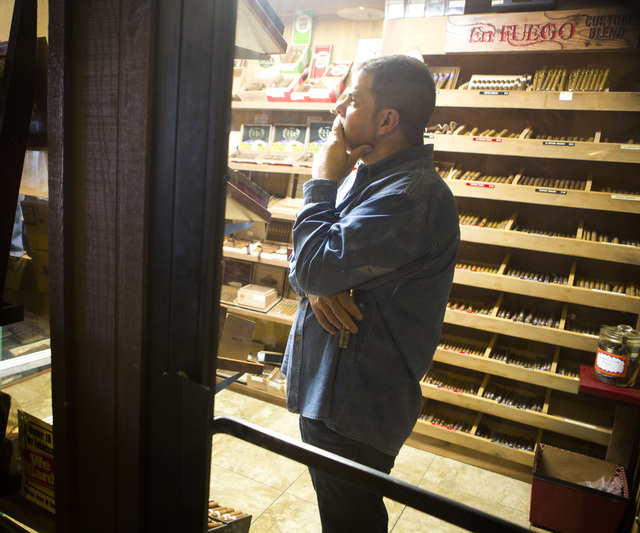 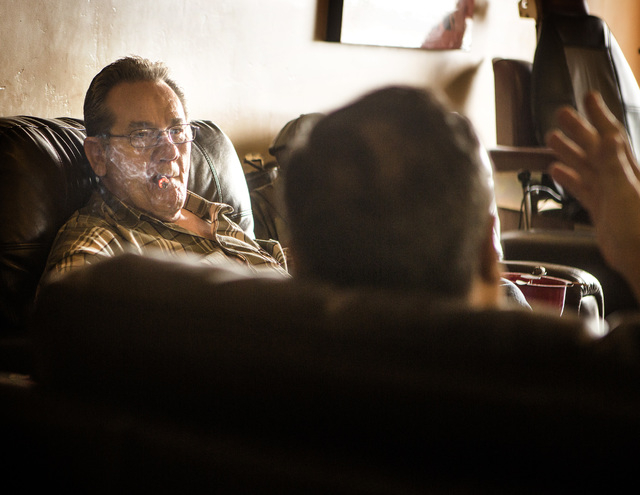 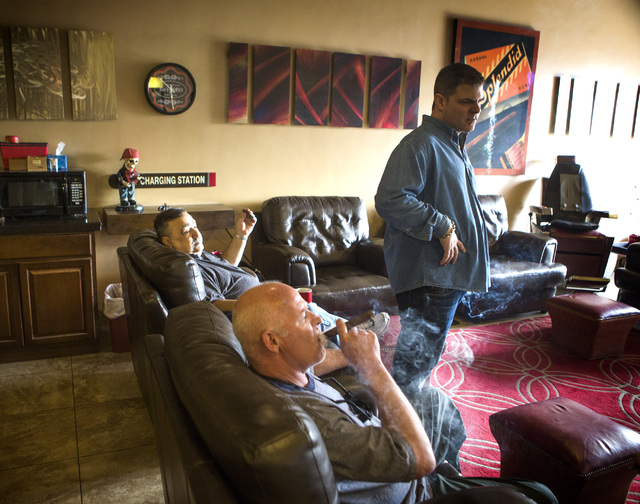 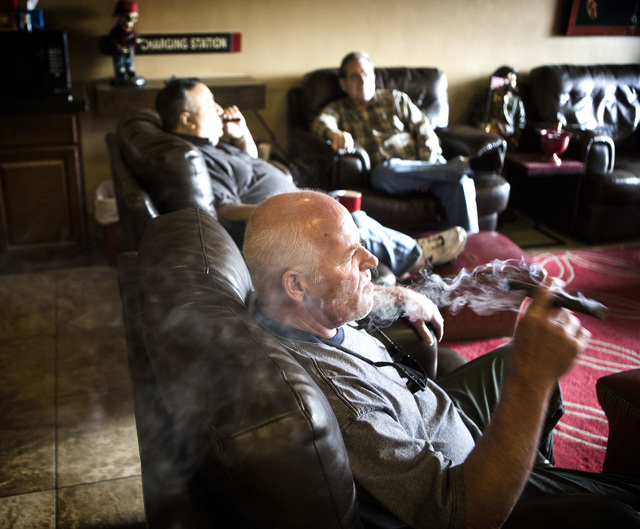 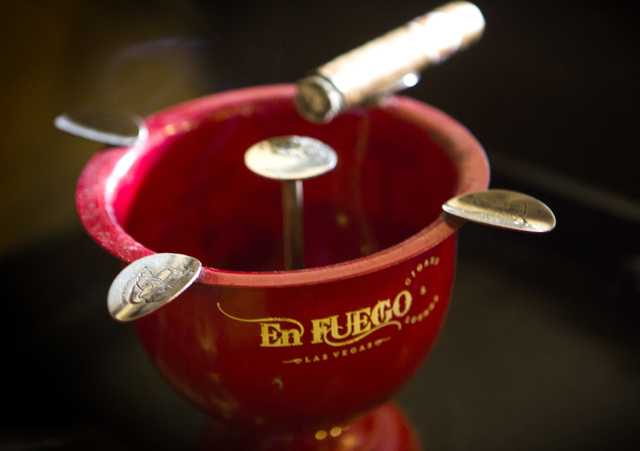 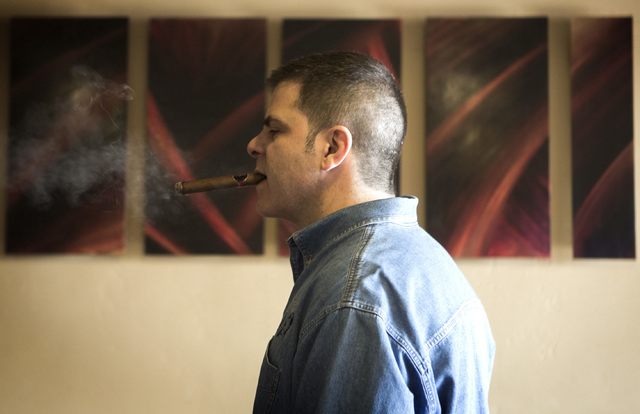 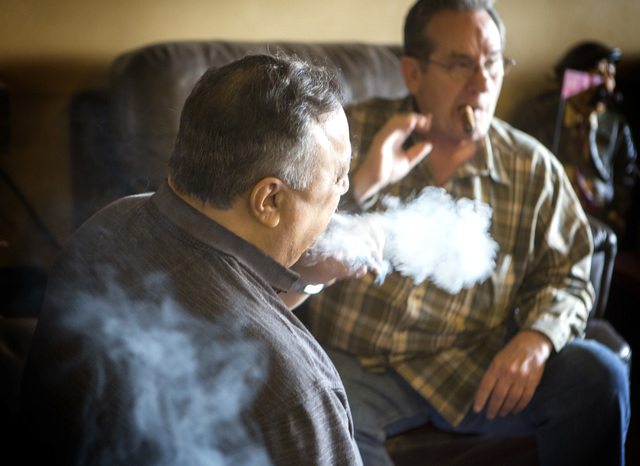 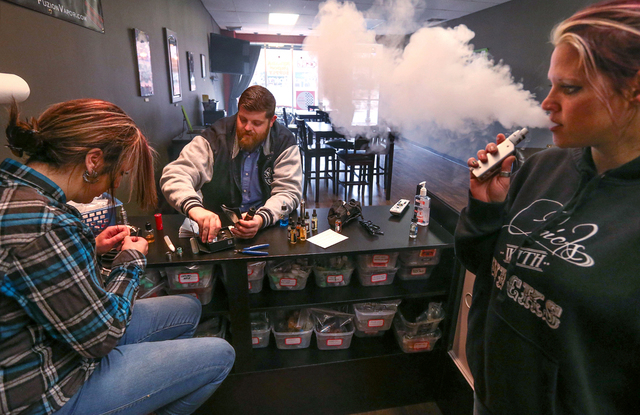 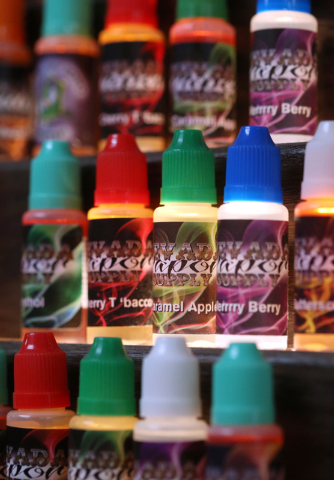 Shelves of e-cigarette flavors available at the Nevada Vapor Supply in Carson City, Nev., on Tuesday, Jan. 27, 2015. Cigarette taxes and regulations on e-cigarettes will be part of the legislative agenda when the session convenes Monday. (Las Vegas Review-Journal/Cathleen Allison) 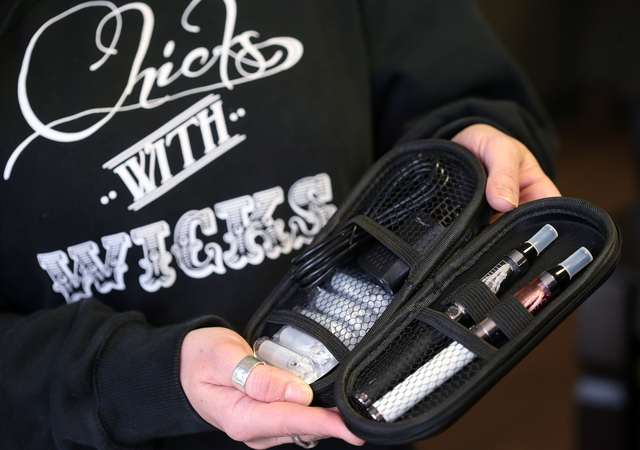 Nevada Vapor Supply co-owner Nina McIntosh shows one of the starter e-cigarette kits they offer in their Carson City, Nev. store, on Tuesday, Jan. 27, 2015. Cigarette taxes and regulations on e-cigarettes will be part of the legislative agenda when the session convenes Monday. (Las Vegas Review-Journal/Cathleen Allison)

CARSON CITY — Smokers would pay more under Gov. Brian Sandoval’s proposal to increase cigarette taxes while those who get their nicotine fix from flavored concoctions inhaled through battery-powered devices could see new levies and restrictions on “vaping.”

For the first time, the vaping industry will have a lobbyist in Carson City who represents a new political action committee — the Nevada Vaping Association.

Sandoval’s $7.3 billion general fund budget proposal includes raising the excise tax on a pack of cigarettes by 40 cents to $1.20. The increase is projected to raise about $80 million and mark the first hike in Nevada’s cigarette tax in more than a decade.

Health officials hail the move, saying the higher the tax, the more people are inclined to quit a habit that causes cancer, heart disease and death.

“From a public health perspective, we know that works. We would like to see it raised even higher,” said Maria Azzarelli, Southern Nevada Health District tobacco control coordinator.

Nevada was once considered the “smokiest state in the nation.” In 1999, a third of adults smoked. The state’s adult smoking rate has since dropped to 19.4 percent, putting it in the middle of state rankings, said John Packham, director of health policy research at University of Nevada School of Medicine.

“It’s one of those win-wins,” he said, predicting the measure will pass the Republican-controlled Legislature.

“There will be malcontents … who are opposed to any type of tax. But this is one that has more supporters than detractors, if I had to guess,” Packham said.

“That would make me stop smoking,” said Camp, 54, while purchasing a pack of smokes. He said he tried to quit a month ago, and is cutting down.

“I don’t think it would keep people from smoking,” she said outside the same tobacco shop. “Cigarettes are addicting.”

She also thinks targeting smokers to help pad the budget is unfair, arguing many people are still suffering from the economic downturn. Raising the price will amplify stress on people already having a tough time, she said.

Also a cigarette smoker, he said the potential tax wouldn’t curb his habit. But he said the state should look instead to other alternative revenue sources, such as recreational marijuana, which is illegal in Nevada.

John Saed, a cashier at a smoke shop in Las Vegas, said customers wouldn’t like a 40-cent-a-pack increase.

“The customers are going to whine about it, but they’re not going to stop smoking,” he said.

Nevada’s tax rate ranks 35th in the nation and is lower than surrounding states.

Although Indian smoke shops sell a lot of cigarettes, tobacco buyers don’t get a bargain from taxes. Tribal governments tax cigarettes at the state rate and get to keep the proceeds.

Meanwhile, the exploding popularity of e-cigarettes is likely to come under scrutiny with proposals to tax and regulate use.

A bill pre-filed on behalf of the Nevada Taxation Department would categorize products containing liquid nicotine as “other tobacco products,” subjecting them to a tax rate of 30 percent of the wholesale price, similar to taxes on cigars and chew.

Other measures could restrict use and sales to minors.

Azzarelli has been working with Las Vegas-area jurisdictions to restrict e-cigarettes and would welcome statewide policy and regulation.

“These products are unregulated so it’s a free-for-all,” Azzarelli said. “Anybody can make them, anybody can sell them.”

Azzarelli said she wants to see e-cigarettes subject to Nevada’s Indoor Clean Air Act that was passed by voters in 2006 and banned smoking in most public places, including schools, places of employment, restaurants, day care centers and grocery stores. Gambling areas of casinos are exempt.

Azzarelli said e-cigarettes present a conundrum because instead of smoke, they emit a type of vapor cloud, hence the term “vapors” for people who partake.

“We’ve worked with numerous organizations, including the Clark County School District,” she said. “They’ve had a tobacco-free campus policy since 2003 that didn’t allow any tobacco products.”

Then e-cigarettes arrived and were being used by parents, teachers, even students, she said. Her department worked with school officials to amend the policy to include a ban on e-cigarettes.

E-cigarettes and vaping provide an alternative to smoking, said Genie Cendana, online manager at Sin City Vapor, which has four locations in the Las Vegas area.

Both products rely on liquid nicotine and provide a cheaper option to smoking, she said. Some users are ex-smokers and others aren’t, she said, adding that her store doesn’t market itself as a smoking cessation program.

As for the effect of the tax, Cendana’s not sure what it would have on the industry but doesn’t discount worst-case scenarios.

“If anything, the worst possible thing that would happen is shops would close and possibly a black market would form,” she said. “I’m not sure.”

“The goal is you wean yourself down,” she said, standing behind a counter with colorful accessories and shelves of small vials of flavored nicotine with names such as “Frosted Gingerbread,” “Strawberry Lemonade,” “CitruSonic” and “Moot’s Juice.”

But health officials discount the claim and say vapor from e-cigarettes contains cancer-causing chemicals and could hook a new generation on nicotine.

“These products are not sanctioned as smoking cessation devices but they are being sold as that,” Azzarelli said.

Bryan Bedera is a lobbyist for the Nevada Vaping Association, a political action committee that formed in December and has 40 members.

“If all retailers deal with it like all other tobacco retailers have dealt with their products, it’s just going to raise the price of the good,” he said. “The reality is it’s pretty clear that vaping is not as bad for you as tobacco is.”

Bedera said that nicotine gum isn’t taxed like tobacco products — and neither should vaping products.

Given the newness of the industry, Bedera said it’s an issue that many states are facing.

The organization isn’t just opposing the tax; it’s also working on legislation to prevent the sale of vaping products to minors.

The Food and Drug Administration is reviewing rules to bring e-cigarettes under federal oversight and subject to the same restrictions as cigarettes.

Last week the California Public Health Department deemed e-cigarettes a health threat and called for strict regulation, and several states have been grappling with regulations and taxation.

Minnesota assesses a tax rate of 95 percent of the wholesale price.

“The regulation is catching up with the technology,” Packham said. “States like Nevada that are going into session are all dealing with it one way or another.”

Review-Journal writer Ben Botkin contributed to this report. Contact Sandra Chereb at schereb@reviewjournal.com or 775-687-3901. Find her on Twitter: @SandraChereb.