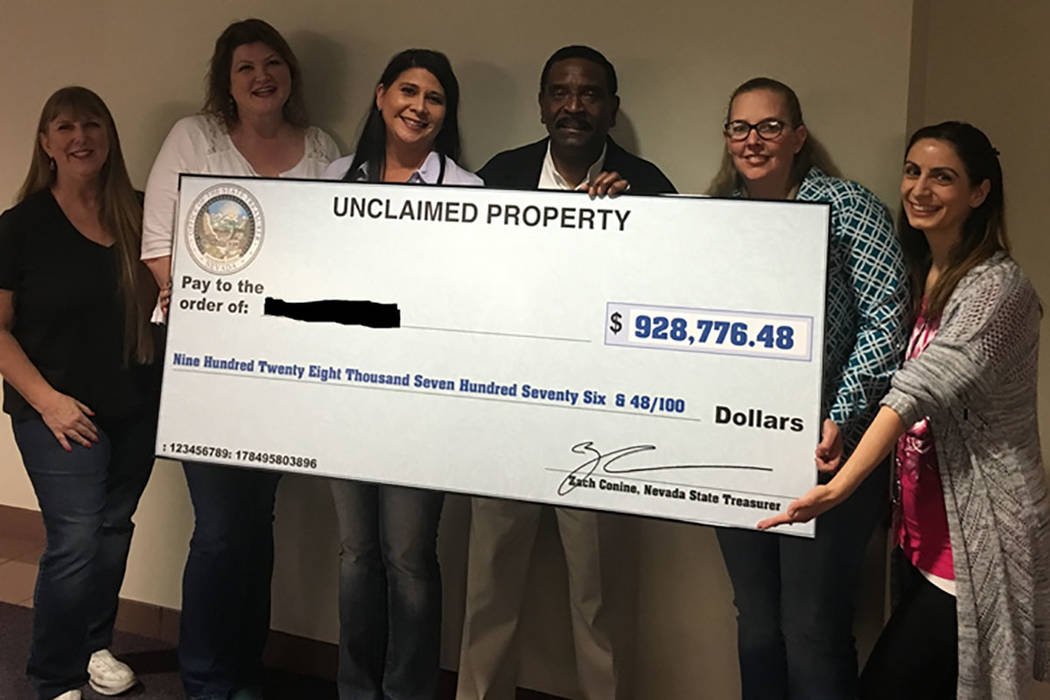 The Nevada Unclaimed Property Division returned this amount to a single claimant, according to a Facebook post on April 2, 2019.

CARSON CITY — The record $44 million in unclaimed property the Nevada treasurer’s office returned in the past year to more than 28,000 claimants includes individual payments ranging from nearly $929,000 to 1 cent, a review of the payment schedule shows.

As with other paltry reimbursements, the penny payment is likely the result of an automated system that sends out a check no matter how small, the state treasurer’s office said Wednesday. The state is required to honor all claims, though claimants who find out that they’re due only minuscule amounts sometimes forgo them.

The returned funds do not represent individual claims but can include a collection of sums from bank accounts and other deposits, legal settlements, life insurance payments, uncashed checks, utility deposits and securities. Unreturned property is held in perpetuity by the treasurer’s office and is used to fund state programs such as Millennium Scholarships.

The top 100 payees include 26 corporate or government entities such as casinos and resorts, cities, the U.S. Treasury and even Google, which got back nearly $140,000. The federal treasury likely accepted returned funds on behalf of other federal agencies, said Linda Tobin, deputy state treasurer of unclaimed property.

The same is true for corporate payees who might receive payments for subsidiaries, she said.

“There’s a whole laundry list of different things that can be happening with those businesses because of the scope of their operations,” Tobin said.

The state returned $3.8 million more in 2018-19 than in the previous year — a “banner year,” Treasurer Zach Conine said in a statement.