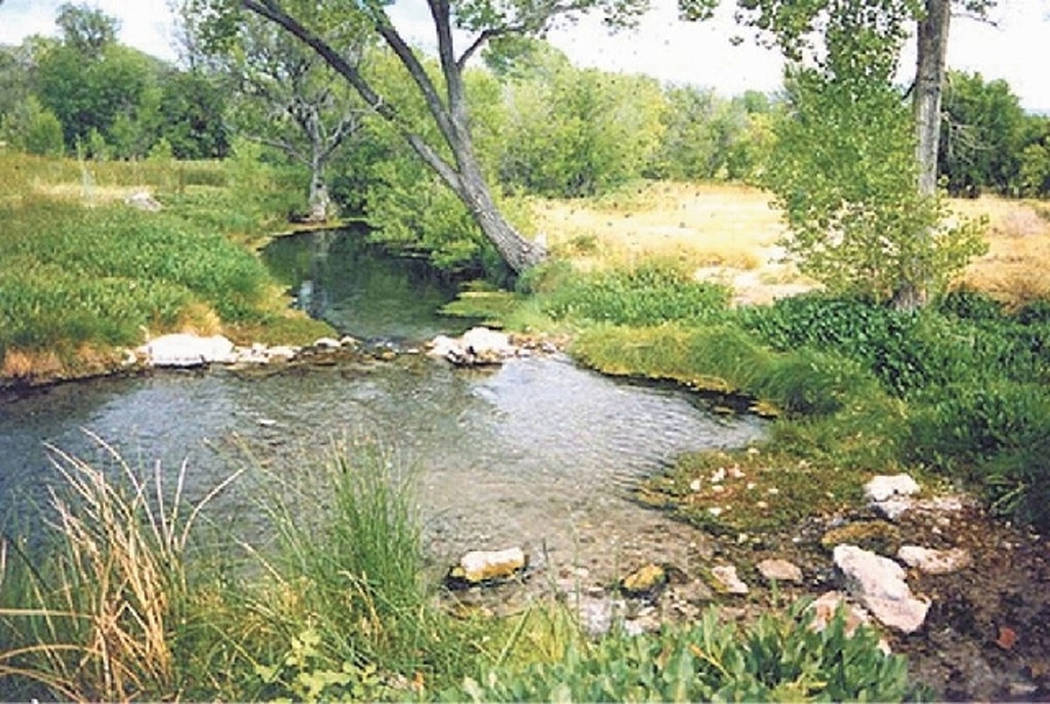 Ash Spring, a popular spring-fed swimming hole in Lincoln County, was closed by the Bureau of Land Management in July 2013 amid concerns about public safety and enviromental damage. (Courtesy, Nevada Fish and Wildlife Service) 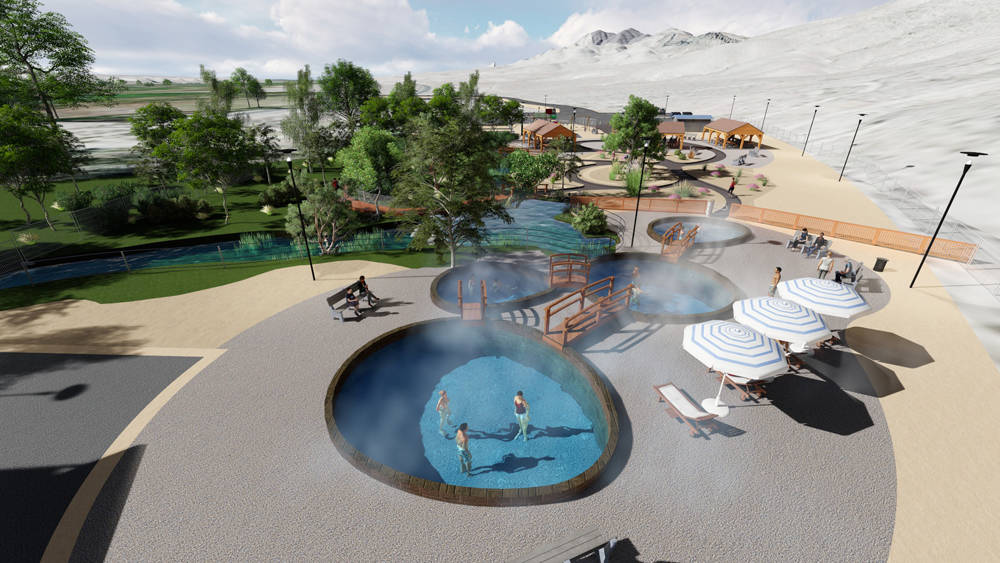 An artist's rendering shows development plans for Ash Springs, about 100 miles north of Las Vegas. This option is among several being considered for the site, which was closed by the Bureau of Land Management in 2013. (Friends of Pahranagat Valley)

More than four years have passed, and the Bureau of Land Management still hasn’t figured out what to do with a once-popular hot spring in Lincoln County that remains closed to the public.

The BLM cited concerns about public safety and environmental damage when it shut down the spring-fed swimming hole along U.S. Highway 93, about 100 miles north of Las Vegas, in July 2013. Since then, public meetings have been held and plans have been floated to reopen the Ash Springs Recreation Site, but no one has been allowed back into the water.

Shirley Johnson, an assistant field manager for the bureau’s Caliente field office, said the BLM is nearly finished with a draft environmental assessment for the site, though she declined to predict when the document might be released for public review. 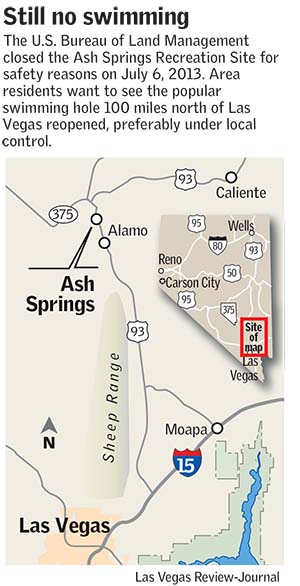 “Nobody wants this put to bed faster than me,” Johnson said Thursday.

The latest hang-up involves a privately owned parcel between the recreation site and U.S. 93. Johnson said the parcel turned out to be larger than the BLM initially thought, complicating the agency’s plan to build a new access road from the highway to the federally owned portion of the spring area.

She said the BLM doesn’t have permission from the private landowners for visitors to drive across their land to get to the spring.

Cody Whipple is a little confused by that.

Whipple is a lifelong resident of the Pahranagat Valley, home to Ash Springs. He also is vice president of Whipple Cattle Co., which owns the 7-acre parcel between the highway and the spring. “We’ve never objected or said anything negative to the BLM about it,” Whipple said.

In fact, he said he wants to see the recreation site open again, as do many of his neighbors.

Whipple said Ash Springs was a big part of his childhood. He and his teammates on the high school football team used to soak their sore muscles in the hot water after two-a-day practices. “We’d be in there in December and January with our hair frozen,” he said.

But over the past decade or so, the recreation site fell victim to its own popularity. Many locals stopped going, especially on weekends, because the place was overrun with out-of-town visitors and illicit campers who trashed the grounds and fouled the water.

Whipple said the BLM wasn’t managing the place properly then, and he doesn’t trust the agency to manage it now.

“That’s not a knock against anybody. They’re just not in the resort-management business,” he said.

That’s how Whipple sees the future of the site: as a small resort where entry is controlled and fees are collected to pay for trash collection and upkeep.

He’s not alone. Early last year, a group of locals calling itself the Friends of Pahranagat Valley unveiled a detailed proposal that included four man-made soaking pools next to a fenced natural area where swimming would be prohibited to protect native plants and federally protected fish, namely the Pahranagat roundtail chub and the White River springfish.

Though its release date has not been set, the BLM’s environmental assessment of Ash Springs is essentially finished. Johnson said the document looks at a range of options for the site, from the elaborate development plan floated by the Friends of Pahranagat Valley to no changes at all.

Other possibilities include turning it into more of a picnic area or banning swimming and allowing access only for conservation and scientific activity, Johnson said.

One thing is certain: Nothing will be done without additional input from the public, a process that will begin as soon as the environmental assessment is released.

Whipple is eager — and a little anxious — to see what the BLM comes up with. He said it seems like the agency has spent the past four years “creating issues” as an excuse to keep the place closed.

“We definitely want to see it rebuilt and managed in a way that works for the county, the town and the people here,” Whipple said.

As a bonus, he said, it would be nice to see that happen soon.