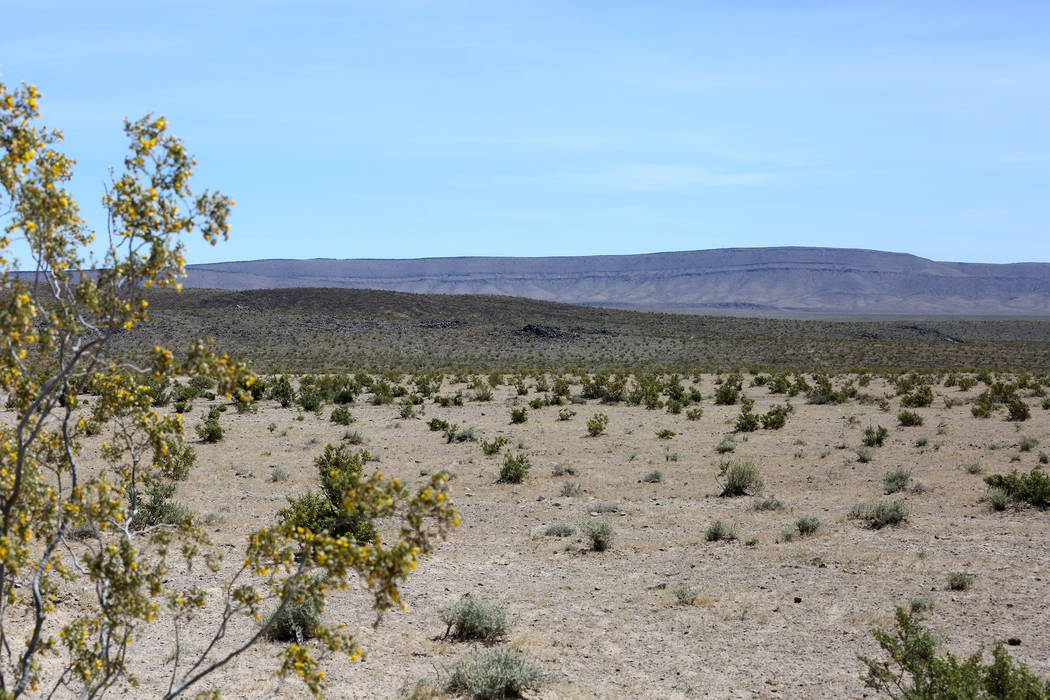 The west rim of Yucca Mountain as seen from Crater Flat on May 3, 2017. (Michael Quine/Las Vegas Review-Journal) @Vegas88s

ROCKVILLE, Md. — A federal advisory panel took a preliminary step Tuesday in a lengthy process to determine if a nuclear waste repository should be built at Yucca Mountain.

The panel meeting at the Nuclear Regulatory Commission came despite a lack of federal funding for the project and repeated vows by Nevada officials to fight the process.

The hearing’s purpose was to receive input on reconstructing an electronic library for documents needed to rule on the Energy Department’s application for a license to build a repository for nuclear waste from power plants.

It also came just one day after Gov. Brian Sandoval, who opposes a Yucca Mountain repository, was in Washington for the winter meeting of the National Governors Association, which he chairs.

Sandoval, a Republican, said the Trump administration knows well his opposition to the proposal to revive the licensing process, which was halted in 2011 by the Obama administration.

“The state is going to take an adverse position against any effort to license Yucca Mountain and any effort to move that project forward,” Sandoval told the Las Vegas Review-Journal.

“Nevada, at least on my watch, is going to continue to oppose the Yucca Mountain project in any form,” he said.

Nevada has 218 challenges to the Energy Department license application, most of them pertaining to water and contamination of resources.

The state has denied the federal government a water permit at Yucca Mountain, located in Nye County, about 100 miles northwest of Las Vegas.

Nye and other rural Nevada counties support the licensing process, which would allow the NRC to determine whether Yucca Mountain would be a safe geological site for storing nuclear waste.

Darryl Lacy, director of planning for Nye County, participated in the advisory panel hearing via the internet, as did Phil Klevorick economic development liaison for Clark County, and Ian Zabarte with the Native Community Action Council.

Diane Curran, an attorney for Eureka County, attended the hearing in person. She told the panel she views the hearing as “a preliminary discussion.”

Judy Treichel, executive director of the Nevada Nuclear Waste Task Force, told the panel a transparent system that allows the public to view documents is needed to reduce skepticism, especially among people in Nevada who feel they are being “dumped on.”

And Bob Halstead, executive director of the Nevada Agency for Nuclear Projects, said the License Support Network system and library are important in leveling the playing field if the licensing process resumes and the state’s challenges are adjudicated by the NRC.

The NRC estimates costs on various options to reconstitute or restore the Licensing Support Network would range from $900,000 to $4.4 million, with recurring annual costs of $600,000 to $1.7 million.

But while the Trump administration has proposed reviving the licensing process, Congress has yet to act on the request.

But Amodei is the lone member of the Nevada congressional delegation who does not outright oppose efforts to use the Yucca Mountain site to store 75,000 metric tons of waste produced by power plants in 31 states.

Titus and the state’s two U.S. senators, Republican Dean Heller and Democrat Catherine Cortez Masto, have filed legislation that would require local consent for the siting of a national repository for nuclear waste.

Yucca Mountain was designated by Congress in 1987 as the site for nuclear waste disposal from power plants.

The Obama administration halted the licensing process in 2011 at the behest of then-Senate Majority Leader Harry Reid, D-Nev.

Trump called for a revival of the process last year in his budget for fiscal 2018, which began Oct. 1.

Although the House backed the request, the Senate did not appropriate funding.

Trump again included $120 million for the Energy Department to continue the licensing process in fiscal 2019. The NRC is seeking $47 million to hire personnel for Yucca Mountain licensing.

The advisory panel is meeting to hear ideas on how to update the system for storing nearly 7 million documents, and more expected to be filed, if the NRC gets the funding to continue the licensing process.

The Licensing Support Network Advisory Review Panel is made up of 20 entities involved in the process, including the Energy Department, the NRC, Nevada, Native American tribes and counties in Nevada and California.

Andy Bates with the NRC, a member of the advisory panel, noted the time that has passed since licensing on the Yucca Mountain project began.

It’s been “almost 15 years” since the panel has met, Bates said.