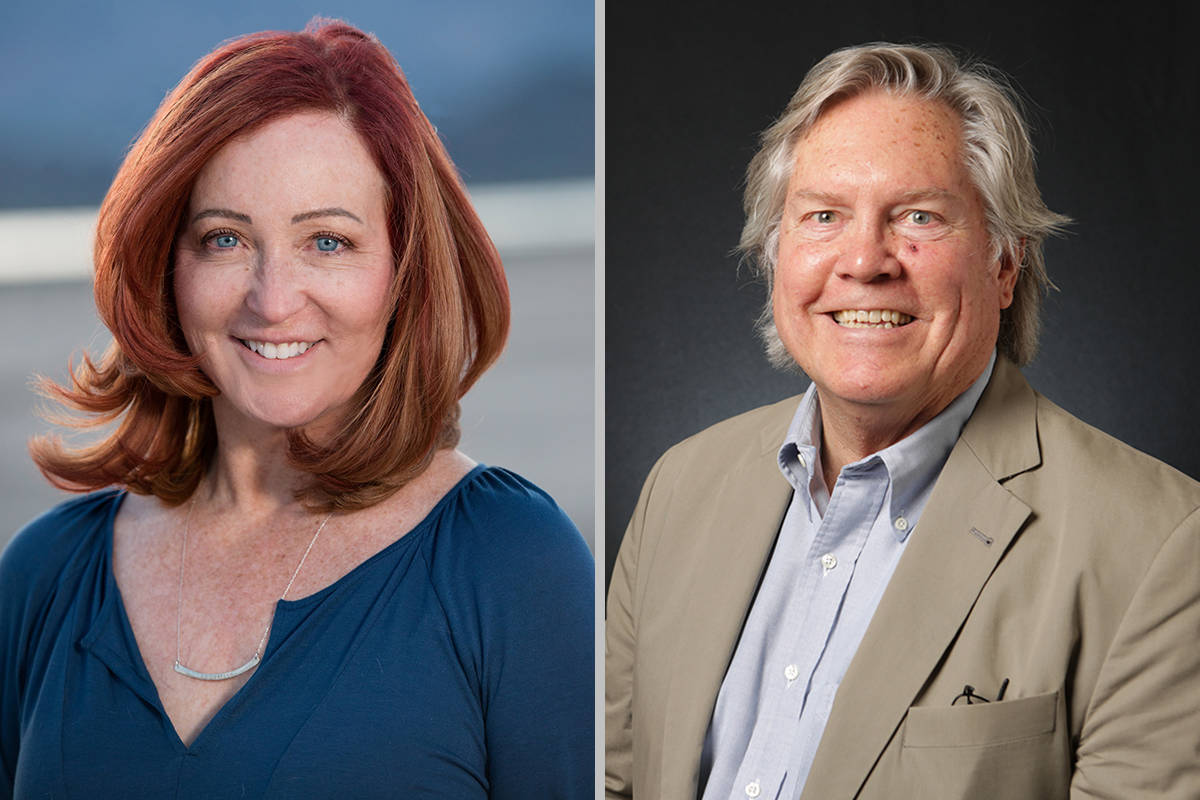 The race to elect Nevada Democrats’ next leader has offered a rare public glimpse into internal struggles over the makeup and trajectory of the state’s party ahead of a crucial midterm election next year, as backers of the two liberal candidates have flooded Twitter this month with challenges to both candidate’s progressive resumes.

The brief contest has even drawn direct intervention from some of the state’s highest elected officials and leaders, including Sen. Catherine Cortez Masto, who is up for re-election in 2022.

The chair is the voice and face of local Democrats. But it must also coordinate with individual campaigns, advocates, county groups and the national party, managing huge sums of money — some $13 million in 2020 cycle, according to the state party — in the process.

Whitmer’s camp has attacked Segerblom’s admitted connections to “establishment” party leaders, while other state party members have accused Whitmer of actively suppressing people of color from leadership positions and forming clubs or caucuses within the county party.

The race will mark a crossroads for a younger, more progressive state party central committee created in large part by Vermont Sen. Bernie Sanders’ victory in the state’s 2020 caucuses.

In an interview, Segerblom said he had not considered running for party chair until several people, including Cortez Masto, called him to gauge his interest.

“People know I’m from the Bernie side, but I’ve also got ties to the establishment,” Segerblom said. “I’ve had a lot of battles — have lots of scars, too.”

Cortez Masto’s campaign declined to comment when asked about the apparent call.

Segerblom, who was party chair in the early 1990s, said a second term would serve as a “capstone” to a nearly 50-year political career before ceding party leadership to younger generations.

“Having been in the Legislature, I’ve had more legislation vetoed by Republican governors than anyone,” he said. “We don’t want 2022 to be like 2014 (when Republicans won control of all of Nevada’s executive positions).”

A list of his endorsements went out to central committee members on Wednesday. They include several organizers and Sanders campaign alumni, as well as some of the state’s most prominent elected officials: Attorney General Aaron Ford, Assembly Speaker Jason Frierson and state Senate Majority Leader Nicole Cannizzaro.

“(Segerblom) is one of the most progressive officeholders Nevada has ever seen, but he also has the respect of Democrats across the ideological spectrum,” said Peter Koltak, Sanders’ former senior adviser for the state and one of Segerblom’s endorsers. “To be successful in the midterms, we need a party chair who knows how to run successful campaigns and who can engage respectfully with all elements of the party. That’s Tick.”

In an interview, Whitmer said she decided to run because she’s often heard young people and voters of color say they are unhappy with a lack of engagement and resources from the state party. She did not intend to challenge outgoing Chair William McCurdy II, who she praised as a good leader, but entered the race when McCurdy declined to run for re-election. (McCurdy gave up his Assembly seat and was successfully elected to the Clark County Commission this year.)

“We need to be doing the groundwork in BIPOC (Black, indigenous, people of color) communities, not just paying lip service when there’s an election,” Whitmer said.

Whitmer said she’s already been doing this work as chair of the county party, and 2nd vice-chair before that. She said the county party has invested in diverse communities, and she personally has kept some 1,000 organizers engaged and involved in Democratic politics after the 2016 cycle, in which some Sanders supporters felt cheated by the state’s election and threatened to leave the party.

Many of these folks now sit on the state central committee, which has Whitmer confident about her chances against the more well-known Segerblom.

She also referenced a recent meeting in which she said a Democratic state senator cautioned fellow Democrats about the possibility of a “bloodbath” at the 2022 midterms, in which Democrats may lose some of the hard-fought local elected positions gained in recent years.

“I am committed to re-electing every single Democrat, including Sen. Cortez Masto and Gov. Sisolak, and I’m not willing to concede a single seat in the upcoming election,” Whitmer said.

Some local Democratic campaign operatives expressed concern this week after a 2019 tweet surfaced in which Whitmer criticized Rep. Steven Horsford and appeared open to the idea of a primary challenge against Horsford due to his lack of support for a single-payer health care system.

Asked about this, Whitmer said she does not support any primary challenges to currently elected Democrats. She said she told Cortez Masto this during her own recent phone conversation with the state’s senior senator.

If elected, Whitmer said she would follow her own advice.

“The chair should not just be collecting checks from corporate donors or making phone calls or showing up at a few events,” Whitmer said. “You need to be out and on the ground every day. I want to take this party forward and continue adding more people to the party.”

The campaign battle came to a public head on Monday, when a letter that had circulated through Democratic circles late last week went public on social media.

The letter stressed the importance of fostering diversity within the party before accusing Whitmer of opposing such measures and suppressing dissenting voices.

Specifically, it accuses Whitmer and her allies of blocking the formation of new Black, Latino and Asian-American/Pacific Islander caucuses, claims Whitmer’s supporters “targeted progressive women leaders of color with online harassment” and said Whitmer mislead people of color about vacancies on the state central committee in order to install her allies in those positions.

It was signed by about two dozen Democratic organizers and central committee members, including both of the state’s Democratic National Committee representatives.

Whitmer said in a statement the letter and its allegations had not been shared with her either before or since its circulation. Her statement did not specifically deny them, but it noted Whitmer “took these allegations very seriously.”

She said she looks forward to learning more details from the letter’s signatories and the state central committee, “to fully and adequately address their concerns and to demonstrate my commitment to building a more diverse and inclusive Democratic Party.”

On Wednesday, Whitmer addressed the third claim in her interview.

The state central committee typically has hundreds of vacancies, many coming from populous Clark County, Whitmer said. However, she has worked to fill these vacancies, which are first-come, first-served and only require the applicant be a registered Democrat.

As such, Clark County has a waitlist of more than 400 people for its allotted spots on the central committee. She denied withholding positions from anyone, saying she simply adds people from her waitlist as spots become available.

Thomas Hassen, a state central committee member and Whitmer supporter, said he had no knowledge of the harassment and vacancy claims made in the letter, but he was adamant it mischaracterized the formation of the new statewide diversity caucuses.

That claim refers to an August 2020 motion made before the state central committee, Hassen said, which was voted down by a wide margin. He said this was not due to Whitmer or anyone else opposing the creation of these caucuses; rather, Hassen, Whitmer and more than 130 other committee members opposed allowing officers for those yet-unformed caucuses to be immediately seated on the central committee’s executive board.

“We were saying those caucuses don’t exist yet, you don’t have input from those communities, so this was undemocratic and a tokenizing of these communities,” said Hassen, who is Black.

He said a similar motion establishing the process to create these new caucuses passed in November, and the groups are currently forming and electing leaders who will sit on the executive committee. The new Black caucus, for example, will have a confirmation vote at next month’s meeting.

Democratic National Committeeman Alex Goff, who carried the diverse caucus motion in August and signed the letter criticizing Whitmer, said he was not seeking to “tokenize” anyone. Rather, as a Black man in party leadership, he hoped to serve members of these diverse communities who asked for his help in creating the new caucuses.

Goff’s wife, Rebecca, is running for party secretary as part of Segerblom’s slate.

Goff denied his motion would have seated anyone on the executive board, but rather it would have established the process by which leaders of these new caucuses, when formed, would eventually serve on the board.

He provided a copy of the motion, which would have changed the number of executive board seats to no more than 27 to accommodate leaders of new Black and AAPI caucuses, as well as the chair of a new Disability Council.

Goff also pointed to a blog post made by the party’s Left Caucus, which Whitmer founded and serves as its “chair emeritus” and which currently holds a majority on the executive board. The post recommended a “no” vote on Goff’s motion in part because it would “weaken progressive victories” for some of the reasons Hassen mentioned. It also suggested voting for Hassen in his bid to represent Washoe County on that executive board.

“If passed, this motion would significantly weaken your control over the Party while failing to do anything meaningful to improve our Party’s diversity,” the post read. “This motion must be defeated.”