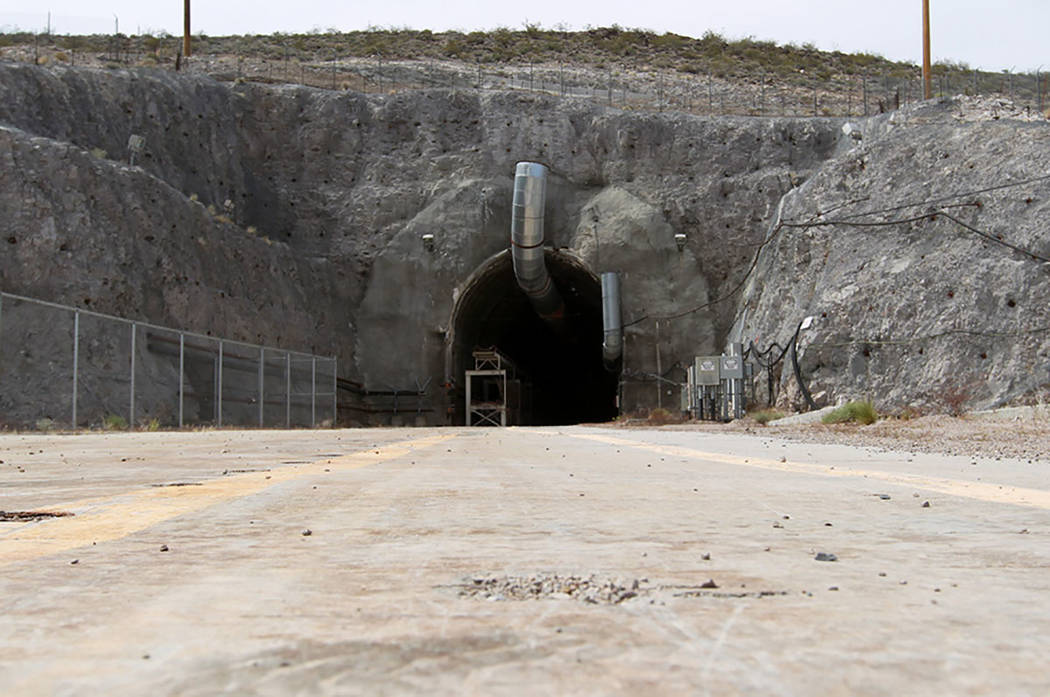 That’s how Nevada’s chief critic of the Yucca Mountain nuclear waste project views legislation that will be discussed next week in a House Energy and Commerce subcommittee titled the “Nuclear Waste Policy Amendments Act of 2017.”

The measure, which will be the subject of an environment subcommittee hearing Wednesday chaired by Rep. John Shimkus, R-Ill., surfaces 30 years after the original notorious 1987 “Screw Nevada” bill. That bill was so-nicknamed by Nevada’s congressional delegation because it designated Yucca Mountain as the only place scientists would study as a burial site for the nation’s deadliest nuclear waste.

At least part of the new bill “is intended big time to be Screw Nevada Two,” said Bob Halstead, executive director of the Nevada Agency for Nuclear Projects.

Rep. Ruben Kihuen, D-Nev., objected to next week’s hearing in a letter Thursday to Shimkus, saying it is outrageous not to have input from Nevada.

“Given the extremely negative impact that such a project would have on Nevada, and the fact that no one from our state is even serving on the committee, I request that I be allowed to testify on this harmful legislation,” he wrote.

Shimkus’ spokesman Jordan Haverly confirmed that the committee received Kihuen’s letter “and is reviewing (it). Congressman Shimkus appreciates Rep. Kihuen’s interest in the issue and looks forward to a continued dialogue with Nevada leaders,” he said.

Haverly also noted in an email that the subcommittee held a hearing last July “specifically to hear from Nevada stakeholders.” At that time, however, there was no bill.

The legislation would reverse the defunding of the Yucca Mountain project in 2012 under former President Barack Obama’s administration, at which time the Department of Energy declared it “unworkable.”

After reviewing the bill’s language regarding the planned repository site, roughly 100 miles northwest of Las Vegas, Halstead said it also does “a pretty good job screwing us on land withdrawals” and is “a general assault on state water rights.”

Nevada and the federal government are at odds on the water rights issue in ongoing litigation because the state engineer has declared that tapping Nevada’s water resources for construction and operation of a nuclear waste repository isn’t a “beneficial use” in the public’s interest.

As written, the bill says that use of the state’s water “is beneficial to interstate commerce and … does not threaten to prove detrimental to public interest. A state shall not enact or apply a law that discriminates against this use.”

Provisions in the draft bill’s “permanent repository” section retain Yucca Mountain as the only site for burying 77,000 tons of used nuclear fuel, regardless of objections by Nevada’s governor and members of Congress. That contrasts with “consent-based siting” of the repository’s host state as called for in unsuccessful legislation Nevada’s delegation pushed last year.

But the bill requires approval by all other state governments for temporary storage of nuclear waste at private “monitored, retrievable storage” sites. Interim storage sites have been proposed by firms in Texas and New Mexico for licensing by the Nuclear Regulatory Commission.

Halstead said it’s unclear if the bill would allow private interim storage companies to tap into the nuclear waste fund that nuclear power ratepayers are paying into. “It’s not clear. Further analysis is required,” he said.

Halstead said the bill would limit Nevada’s ability to protect public health, safety and the environment by usurping land and water rights needed for the repository. It also would damage the state’s ability to challenge changes that the DOE might make to the repository’s license application, he said.

He also contended the legislation makes “false promises even though they are well-intended because they are either impractical, unworkable or unenforceable.”

He cited the example of transporting nuclear waste to Yucca Mountain by trucks and trains.

“The provision to make transportation routes avoid Las Vegas ‘to the extent practicable’ is in practice very difficult, and legally unenforceable,” he said.

The bill basically “fails to fix major problems with the currently broken nuclear waste program,” Halstead said, adding that it “continues forced siting” of the repository in Nevada, which “undercuts any trust and confidence in consent-based siting elsewhere.”

“The bill completely ignores nationwide concerns about safety and security of thousands of nuclear waste shipments to Yucca Mountain,” he said.

Steven Curtis, past president of the American Nuclear Society’s Nevada Section, says his group “sees no reason for Nevada to object to Yucca Mountain” and is prepared to provide informational briefings “to any group for education on ‘things nuclear.’”

In a nutshell, he said in an email, the bill “clears the way for the (Yucca Mountain) project to proceed, at least through design.”

“We also believe that reprocessing (recycling) should be part of the solution” to the nation’s nuclear waste disposal dilemma, said Curtis, who has a master’s degree in health physics.

He noted that the bill authorizes the DOE to proceed with the repository’s design only after the NRC approves the site and grants public land withdrawal.

“It allows Nevada to accept benefits without giving up its right to object to the site,” Curtis said.

He said benefits could range from cash for citizens, similar to the Alaska Pipeline Fund payments to state residents, or money for colleges. “Whatever we could negotiate,” he said.

Nye County Commission Chairman Dan Schinhofen also expressed support for the bill, calling it “a great development toward having the science heard” and the Yucca Mountain repository moving forward.

He noted that the bill, unlike the current law, would allow Nevada to be the site of an interim storage facility.

Review-Journal staff writer Gary Martin contributed to this story. Contact Keith Rogers at krogers@reviewjournal.com or 702-383-0308. Find him on Twitter: @KeithRogers2