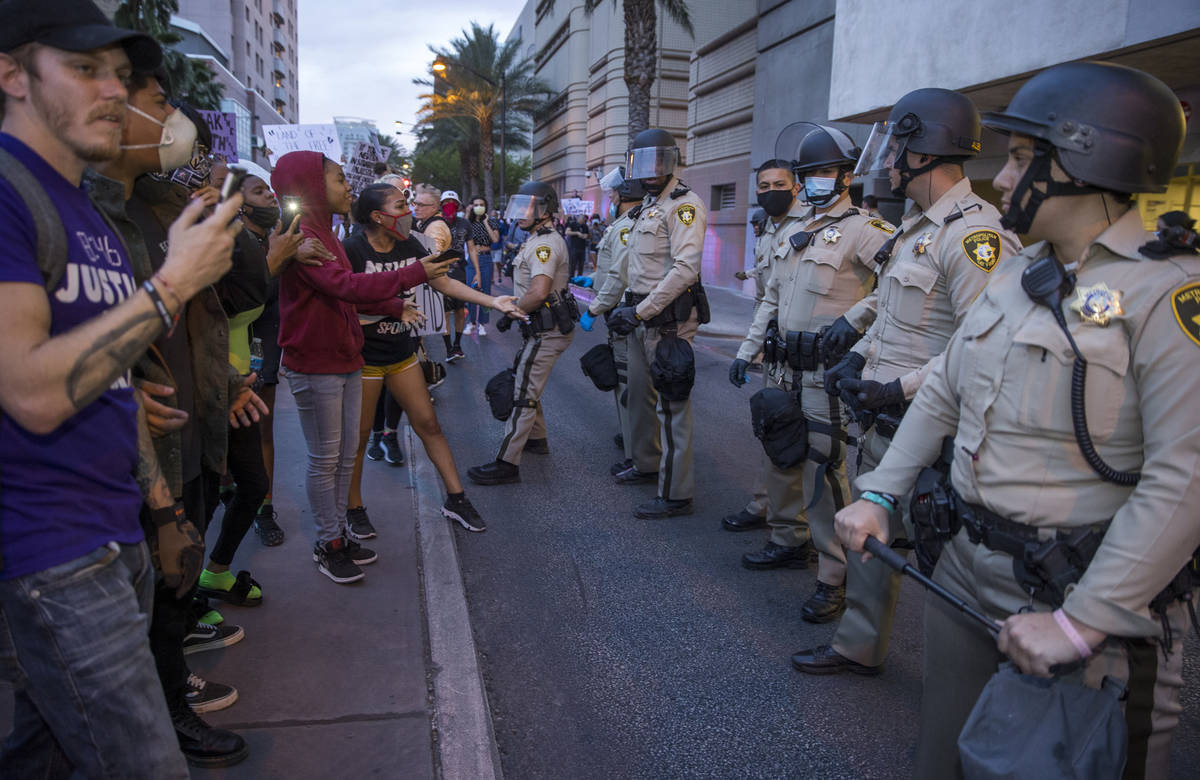 Nearly two-thirds of Nevadans oppose any efforts to shift revenues away from police departments to social and community programs in response to unrest gripping the country over social injustice, according to a new poll.

The Nevada Poll™, conducted by WPA Intelligence on behalf of the Review-Journal and AARP Nevada, found 64 percent of respondents disagreed with the idea, with 51 percent “strongly” opposed and another 13 percent somewhat opposed.

Some U.S. cities have shifted funds in an effort to reshape policing amid widespread protests against police brutality and systemic racism following the high-profile deaths of Black people at the hands of officers.

The late May killing of George Floyd, a Black man, in Minneapolis police custody set off the wave of civil unrest, and other incidents have since faced backlash. A police officer held his knee to Floyd’s neck for about eight minutes as Floyd repeatedly said he could not breathe.

The ex-officer, Derek Chauvin, faces murder and manslaughter charges in Floyd’s killing, while three other officers on scene also were fired and face criminal charges.

Twenty-eight percent of poll respondents, however, said they believed in reallocating police funding to social or community programs, with 13 percent reporting they strongly support the idea.

Nine percent of respondents did not respond either way.

Not abolish, but divest

Protesters marched in downtown Las Vegas in June to call for defunding police and, that same month, a group of students and school counselors publicly urged the Clark County School District to defund campus police.

Annette Magnus, executive director of left-leaning Battle Born Progress, said Thursday that the movement is hampered by a lack of understanding because it is relatively new among the broad public even though activists have championed it longer.

Proponents do not wish to get rid of police departments, but instead want to redistribute resources, including money, from police forces in order to better address underfunded community services such as mental health.

“A lot of people immediately think, when they hear ‘defund the police,’ they hear ‘abolish the police,’ and that sounds really scary and that’s totally understandable,” said Emily Driscoll, a UNLV Boyd School of Law student.

Driscoll, who also works pro bono with Mass Liberation Project Nevada, an organization focused on police accountability and ending mass incarceration, said the movement is “less of a means of abolition and more of a means of divestment.”

She said it is an effort to mitigate the need for policing, which generally stems from racism and poverty, by investing more in social enrichment programs including schools, and less in police.

According to Magnus, it means prioritizing de-escalation and moving away from over-policing, particularly in communities of color — a reform that she said would save money in the long run by reducing the prison population and targeting the root cause of problems.

“I don’t see this as a partisan issue,” Magnus said. “If you proclaim that you are fiscally responsible, then this is something that you should support.”

Clark County Sheriff Joe Lombardo, speaking to KLAS Channel 8 in June, said he could get behind defunding police “in some aspects,” particularly in using social workers to address mental health and homelessness issues that police are not fully equipped to handle.

In an editorial published the following month for the Las Vegas Sun, however, he described the movement as a “radical” idea and noted that fights for funding and for social justice were related.

A message to the Las Vegas Metropolitan Police Department on Thursday seeking clarity on how Lombardo views the issue was not immediately returned.

Steve Grammas, president of the Las Vegas Police Protective Association, the state’s largest police union, said Thursday he agreed that having more social service professionals work in tandem with officers would be an effective way to address issues that arise from mental health and homelessness.

But it would be a move that required bolstering police spending, not reallocating money from one to serve the other, he said.

It would be too dangerous to send a social worker out to a call without any police backup at all, he added. But if officers can spend less time responding to incidents better addressed by an expert, he said, they can then be redeployed to increase their presence in areas where they are needed.

“We should be overly funding police departments, never defunding,” he said.

Metro’s final budget for the present fiscal year is $655 million, or 3.7 percent more than the prior year, according to department records.

Sixty-five percent of likely voters surveyed said they identified as white and 13 percent said they considered themselves Hispanic, Mexican, Latino or Spanish.

Only 9 percent of respondents said they were Black.

The survey results are based on a poll of 512 likely Nevada voters conducted between Oct. 7-11. Sixty percent of respondents answered by landline phone and 40 percent online. The poll’s margin of error is 4.4 percentage points.