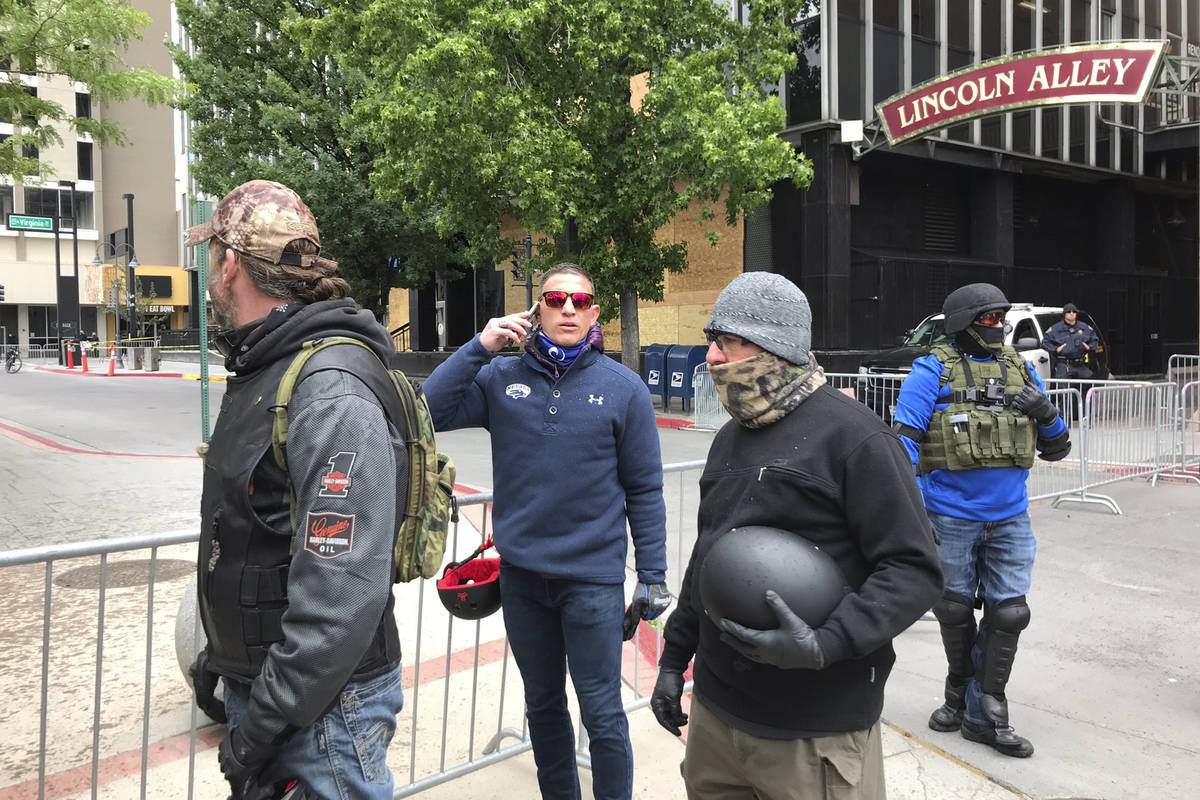 Joey Gilbert holds his phone while standing with others near a Black Lives Matter Peace Vigil in Reno, Nev., Monday, June 7, 2020. A Reno attorney who was in D.C. protesting the 2020 election results during the Jan. 6 insurrection is running to be the governor of Nevada. Former professional boxer Joey Gilbert announced on Saturday, June 12, 2021, that he intends to run to replace Democratic Gov. Steve Sisolak in 2022. (Anjeanette Damon/The Reno Gazette-Journal via AP)

Joey Gilbert, a former professional boxing champion who has spent much of the last year challenging pandemic restrictions in state court and spreading false claims about the 2020 election, COVID-19 vaccines and other right-wing theories, told attendees of the “Arise Freedom Tour 2021” at the Ahern Hotel Saturday he would run as a Republican.

“Let me say this: If election integrity is not the No. 1 issue of these guys running, then they’re either lost, confused or too stupid to be running,” Gilbert said of the early, unofficial Republican gubernatorial field, which includes Clark County Sheriff Joe Lombardo and North Las Vegas Mayor John Lee.

An attempt to reach Gilbert for comment through his legal office was not successful.

He previously hinted at a bid during a May 30 Facebook live video, apparently self-shot while working out, in which he criticized Lombardo as a “dirty cop.” Gilbert also labeled former Sen. Dean Heller and Rep. Mark Amodei, both of whom are weighing a gubernatorial bid, as “never Trump from the jump.”

In the video, Gilbert asks Republican elected officials and county sheriffs not to endorse in the race until meeting with him.

The official filing period for statewide races is not until March.

At the Capitol Jan. 6

In January, the Reno Gazette-Journal reported Gilbert was one of several northern Nevadans present at the U.S. Capitol during the Jan. 6 riots. He reportedly spoke at a nearby event and posted a video to Facebook saying that while he was present, he did not enter the Capitol building. More than 400 people have been charged with crimes as a result of the rioting.

Gilbert, as he has many times through social media, said Saturday that Trump was the actual winner of the 2020 election. Republican challenges to the election results on the basis of various fraud claims have been repeatedly struck down at all levels of both the Nevada and federal court systems.

His personal website lists a variety of legal challenges against vaccinations, mask mandates and closures related the pandemic, as well as a fundraising link to pay off Nevada Occupational Safety and Health Administration (OSHA) fines against businesses fined for breaking the state’s pandemic orders. One such challenge, made in tandem with Las Vegas attorney Sigal Chattah, who is running for Nevada attorney general as a Republican, overturned a statewide ban on large church gatherings.

Gilbert posted on Facebook Monday that he was part of “Nuremberg 2.0,” a purported legal team seeking to charge the U.S. Centers for Disease Control and the World Health Organization with “crimes against humanity” while apparently making a comparison between anti-vaxxers and European Jews during the Holocaust. He added that “doctors must go to prison over this.”

The Democratic Governors Association said Gilbert’s entrance into the race will push the Republican field “to the extreme right.”

“Gilbert only cares about himself, COVID conspiracy theories and Trump’s ‘Big Lie,’” DGA Executive Director Noam Lee said. “He spends too much time bragging about his boxing career and amplifying far-right conspiracies and not enough time showing how he’ll better the lives of Nevadans.”