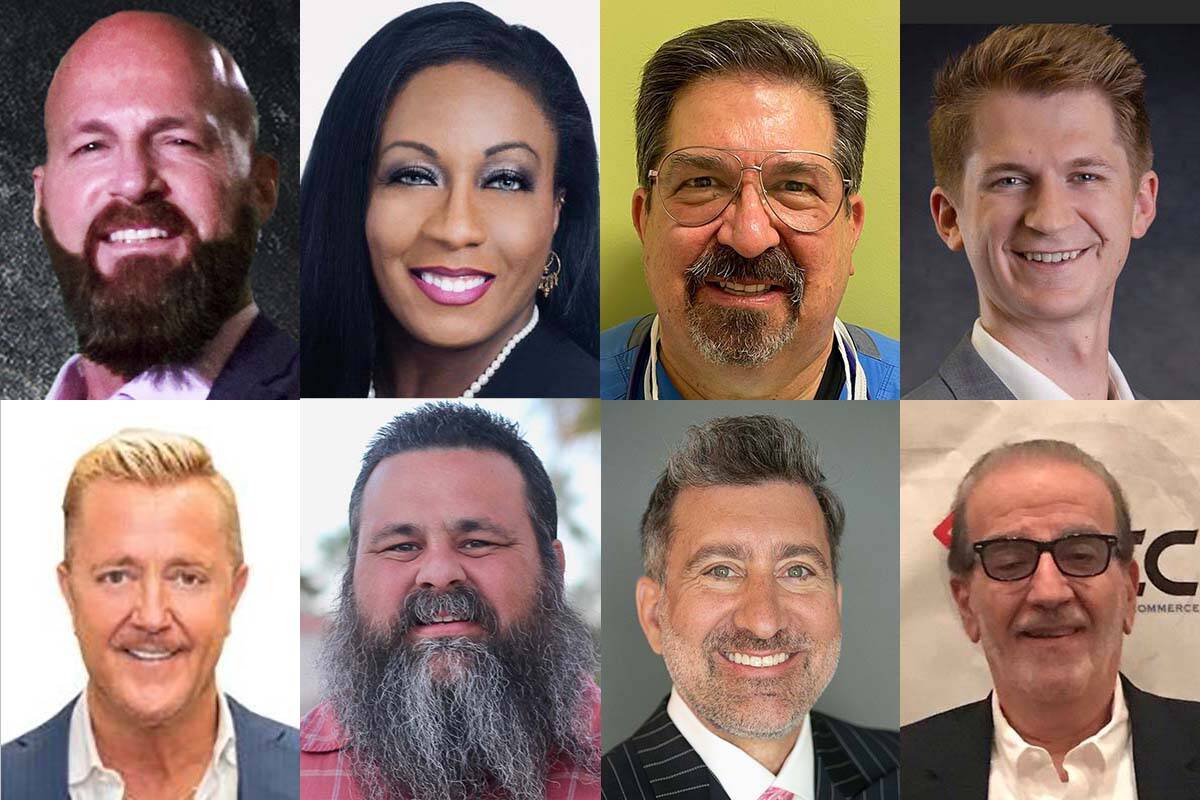 The Republican primary for state Senate District 8 offers a crowded field in 2022, with eight candidates competing for the right to face off against Democratic incumbent Marilyn Dondero Loop.

The district, where Democrats outnumber Republicans by fewer than 3,500 active registered voters, is one of the most competitive seats in the upper house.

Candidate Joshua Dowden describes himself as a “small government, states’ rights Trump Republican.” He works as a financial advisor for Edward Jones. A top priority for Dowden is repealing the state’s commerce tax, passed by a Republican Legislature in 2015.

“Lower regulations,” Dowden said. “Lower taxes and right at the top of that is going to be the commerce tax. As a financial advisor and a businessman, I am in a perfect, unique position to be able to talk intelligently about what is happening in the economy and what we can do to help fix it, spurring economic growth and diversifying Nevada’s economy.”

Dowden wants to break up the Clark County School District into smaller units. He also is a strong supporter of school choice.

“We need to make the school district smaller,” Dowden said. “I think we could break it up pretty easily into five districts. That is far more manageable. The kids need immediate help right now.”

Jennifer Fawzy is a second-generation Las Vegan who works as a real estate agent. She describes District 8 as a thriving district with good schools that could use some improvement. She also wants to improve public safety to address what she called a slight uptick of crime in the Summerlin area, and explore ways the state can address the rising costs of living and housing.

“Making housing affordable and supporting our state’s economy is very important to me,” Fawzy said. “In tandem with that is schools. If we don’t have adults who are workforce ready or children who graduate high school who are workforce ready, we are not going to have much of an economy … with crime going up it is directly related to the fact that many Nevadans don’t have meaningful work. Wages are not keeping up with the skyrocketing inflation and people are frustrated.”

Fawzy said “Summerlin is starting to become more culturally diverse which is awesome.”

“I want to be a part of that,” she said. “I want to make sure it remains a place that people want to live in, and to attract more businesses in Summerlin.”

Jeff Gordon is a native Las Vegan, a former paratrooper and combat veteran who works as a registered nurse at Summerlin Hospital Medical Center. He said he is a strong supporter of the Metropolitan Police Department, and he wants to make sure they have the resources and technology available to combat crime while limiting legislation that restricts police officers from doing their jobs.

Gordon said encouraging youth to pursue careers in science, technology, mathematics and engineering is a critical component of job growth in Nevada. He said there needs to be accountability in schools for students at an early age. He supports job growth development through the opening of the Yucca Mountain storage facility for spent nuclear fuel.

“We could become a leader in the United States for carbon credits by being able to take nuclear core rods, put them in the Yucca Mountain area, then make recycling those core rods one of the things we do,” he said. “These are high-tech, high intelligence jobs that require very skilled people. And there are also low-tech jobs (that come with the project.)”

Gordon supports a tough-on-crime approach for repeat offenders. Unemployment benefits should only be available for those truly not able to work, he said.

Kevin Mann attended the Army Navy Academy in Carlsbad, California, then received his high school diploma through independent study so he could graduate early. He’s a guitarist and waiter who recently started working as a licensed real estate agent. He wants to be a legislator who advocates for veterans, telling them “do not despair. Your sacrifice is not in vain.”

“I feel really passionately about our veterans,” Mann said. “I thought that running for office locally would enable me to get that message out to as many veterans as possible who might be isolated or alone.”

Mann describes himself as a “progressive conservative” and part of a movement of young Republicans who want to legislate changes as opposed to being strictly a reactionary political force. A top priority for him, he said, is curbing “the overbuilding in Summerlin.”

“I think we really need to be increasing the funding of Las Vegas Metro which is the absolute best police force in the entire country,” Mann said. “They are fantastic.”

He also wants to pursue school reform and “protect the integrity of our elections.”

Raja Mourey is the long-time owner of Mourey Insurance Agency. He is also a certified business and life coach.

“I just want to make a difference,” Mourey said. “We need more public servants than politicians. Politicians look for a paycheck. For a job. I already have my businesses…I’m looking to give back. To pay it forward. To serve my district, and my county, and my state, and my country.”

Mourey said a top issue for him is education. The Clark County School District is too large, he said. He’d be committed as a state legislator to furthering education strategies to get kids on the right path. This will include more opportunities in the skilled trades for jobs as carpenters, electricians and plumbers.

“Creating generation after generation of non-graduates — there is a ripple effect,” Mourey said, adding “at the age of 11, 12, or 13 we want to see what is their hobby, what it is that they want to do. We want to create a generation that loves what they do so they never work a day in their life.”

“Is it just a job or is it a passion?” Mourey said. “Lets invest in our educators. Give them hope. A bridge.”

“We need to add more police officers to keep the city in peace,” he said.

Joey Paulos was born and raised in Southern Nevada and a is UNLV graduate. He is a successful businessman who worked as a gaming executive for nearly two decades. He was the builder and operator of the Fly LINQ zipline which was sold to Caesars in 2020. He said he believes the state has been headed in the wrong direction for years, and that the Clark County School District needs to be broken up.

“I’d like to give parents a whole lot more school choice,” Paulos said. “In 2015 there was a very good school choice bill that was passed in the House and the Senate and it got gutted in 2016 when the Democrats took over. I’d like to revisit that. It had education savings accounts that would have been great for students and parents.”

“We’ve given the executive branch a little bit too much power,” Paulos said. “The emergency powers that the governor still has in effect today right now is too much. There needs to be some limitations. An expiration date on that. He should get it for maybe two weeks, 30 days, then go back to the Legislature and have to vote on that again.”

Paulos also wants to provide more resources to cops on the street and punish criminals.

“I’ll work with anyone as long as our goals align,” Paulos said. “I’m independent-minded and a critical thinker and I’m loyal to principles — not an ideology, and that’s why I believe I can make a difference.”

Mark Alan Shaffer was born and raised in Las Vegas. The successful businessman is the owner of MyVegas magazine. He also works as a business consultant in the areas of marketing and advertising.

“In the last 40 years of the magazine business, I’ve sat down with a lot of business owners and talked to them about what really matters to them…I’ve heard a lot of their pains and their struggles,” Shaffer said.

Shaffer is concerned about quality-of-life issues in his district including education. He wants to reduce class sizes, implement school choice and create a contingency of educators and lawmakers to examine what is working in high-ranking education states like Massachusetts, Connecticut and New Jersey.

“A lot of what our state is going through is a lack of common sense. Give parents the choice,” Shaffer said.

He also wants more resources for cops and more programs to address homelessness and to help veterans.

John Schmitz is a trade show industry foreman for an exhibit house. He supervises a crew of eight to 20 people. Pretty much everything he does, he said, is driven by his love of his family.

“School choice is an important issue for me,” Schmitz said. “I’m a believer that the money should follow the child. Parents being told by the government where their kid must go to school? Parents need to decide what is best for their children.”

Schmitz said as a legislator would make sure the government never impinges on personal freedoms. He wants to eliminate the commerce tax. He, too, is concerned about what he described as excessive powers wielded by the governor during the pandemic shutdown.

“He cannot singlehandedly mandate the entire state to do or not do anything,” Schmitz said. “If an emergency situation arises he should have a special session of the Legislature.”

Schmitz is a strong supporter of the Second Amendment. He is a proponent of constitutional carry, or the ability to carry concealed firearms without the need to get a permit.