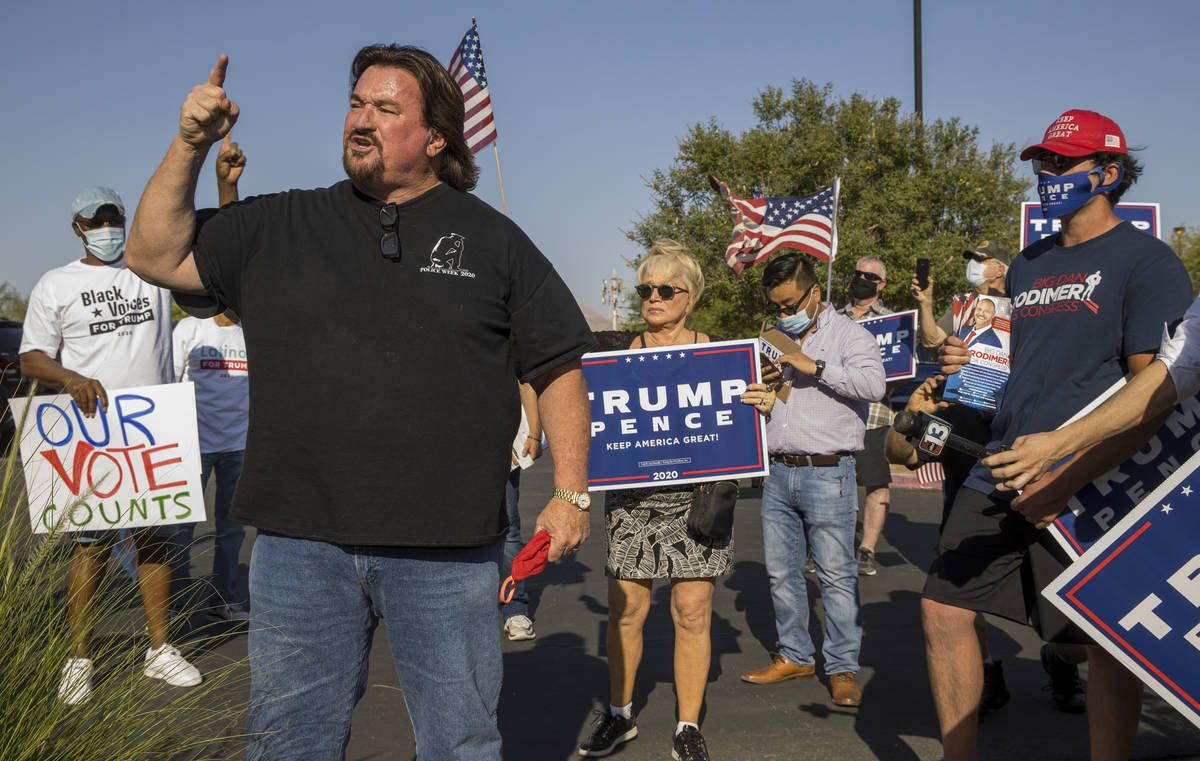 Michael McDonald fires up protestors gathered at the Grant Sawyer building to voice opposition against AB4, a controversial Nevada bill that will provide for a mostly mail-in election in for November in order to curb the spread of COVID-19 on Tuesday, August 4, 2020, in Las Vegas. The state Senate approved the bill on Sunday over the objections of Republicans who decried the risks of fraud and delayed counting of ballots. (L.E. Baskow/Las Vegas Review-Journal) @Left_Eye_Images

The Republicans organized the call after news spread Wednesday of the cancellation of two Nevada rallies headlined by President Donald Trump. The Trump campaign said the president will still visit Nevada this weekend, with new event information set to be released soon.

Sisolak said Wednesday he had no involvement in the decision to shutter the events, which were to be held in airport hangars at the Las Vegas and Reno airports. His office did not immediately respond to a request for comment on McDonald’s accusations on Thursday.

McDonald on Thursday accused Sisolak and the state of hypocrisy, saying thousands are allowed to gather shoulder to shoulder on the Las Vegas Strip or Fremont Street while church services remain outlawed.

He pointed to a May protest in Reno that turned violent and a similar June protest in Las Vegas where Las Vegas Metropolitan Police Department officer Shay Mikalonis was shot and paralyzed.

“There were no restrictions put on how many people were doing that,” McDonald said. “We try to do something peacefully … it’s pretty simple. The average person — I’m an average person — you’re telling me I can go protest without restrictions, but if I have a rally, I have restrictions. It doesn’t make sense. Two sets of rules.”

Trump Victory regional spokesman Keith Schipper added that Sisolak has allowed Democrats to politically assemble but not Republicans. He pointed to neighboring Arizona as a state in which similar Trump rallies have gone off without a hitch.

Sisolak’s COVID-19 mitigation directives specify that no gathering may exceed 50 people. His office pointed out that the White House’s own recommendations for Nevada specify crowds should not exceed 25 people in Washoe County and 10 in Clark County.

Trump’s planned Reno stop was shuttered after the Reno-Tahoe Airport Authority notified the private hangar planning to host it that doing so would violate its lease agreement. The authority stressed there was no political motivation behind its decision, saying the lease agreement requires all tenants to obey state and local guidelines.

Asked about the cancellation in Las Vegas, Schipper said it was his understanding McCarran International Airport told the campaign it could not hold an event at Cirrus Aviation, but he was not sure. The airport has said it never received a request for a Trump campaign event and could therefore not cancel one.

Asked if the GOP had specific evidence Sisolak was involved with the airports’ decisions, Schipper did not provide any.

Schipper said that if reporters request public documents from the governor’s office, it may show some involvement, as it did during an Evangelicals for Trump rally held by the campaign in August.

That event, held at the Ahern Hotel, was not shut down, but the Ahern was fined $11,000 for being out of compliance with the state’s gathering rules. Public documents obtained by the Review-Journal showed the governor’s office urging city officials to take action against the event.

Schipper and McDonald also denied the rallies were some sort of political stunt to provoke a conflict with Sisolak.

Democrats have accused Republicans of endangering public safety by holding such gatherings in the midst of a pandemic, while Republicans say the Democrats are using COVID-19 as an excuse used to keep Democratic nominee Joe Biden from frequent public appearances.

State Democrats have all but ended in-person campaigning, while local Republicans have continued to hold small gatherings that rub up against or even exceed the 50-person rule in addition to the larger-scale planned rallies.

The weekend swing would be Trump’s first in-person visit to Nevada since just before the February caucuses.