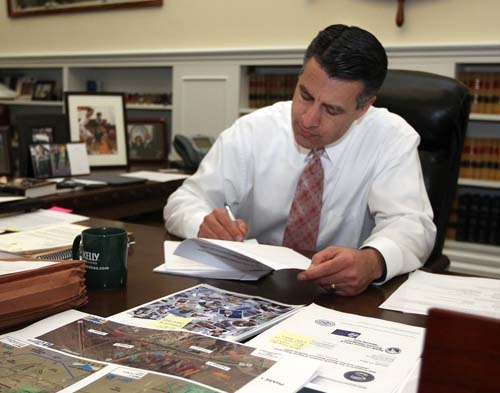 CARSON CITY – Gov. Brian Sandoval isn’t giving up many details as he finalizes his 2013-15 spending plan ahead of his State of the State address on Wednesday. But Nevada’s bleak revenue picture suggests that it will likely be a mostly status quo budget with little in the way of new spending.

Sandoval said last week he continues to tweak his address, which will focus largely on both public K-12 schools and higher education, the two components that make up 55 percent of the current two-year, $6.2 billion budget.

He did hint in an interview Tuesday that pursuing a merit pay system for public school teachers will be part of his spending plan.

"There is money in the budget to ensure we have a fair system by which we’re going to measure the performance of teachers," Sandoval said. "Education will be a big priority for me, and you’re going to hear a lot about it in the State of the State. K-12 as well as higher ed."

Sandoval reiterated his opposition to any type of tax increase, although Democrats in the Legislature might have some leverage in forming the debate if a teacher-backed business tax proposal survives a court challenge.

The amount of general fund revenue expected to be available for the new budget that will start July 1, 2013, is estimated at $6.2 billion. This includes about $400 million in revenues that are dependent on the Legislature extending a handful of tax increases that would otherwise sunset on June 30.

This is about the same amount of money in the current budget, and Sandoval still must invest about $200 million more scarce general fund dollars in his new spending plan to pay for caseload growth in the Medicaid program.

Given these fiscal challenges, the governor’s budget will be the focus of intense scrutiny.

Sandoval has said he will propose extending Medicaid to a new group of Nevadans as a result of the federal Patient Protection and Affordable Care Act in addition to the caseload growth, a move not expected to cost the state a significant sum at least in the short term.

Sandoval’s budget, the first he has crafted entirely on his own as governor, was to go out for printing Friday. His address, which is on his desk, will continue to be refined right up to its delivery at 6 p.m. Wednesday.

OTHERS EAGER FOR DETAILS

A lot of Nevadans, including state lawmakers, state and local government officials and taxpayers, are eagerly awaiting details of just how Sandoval will balance his second budget as governor.

Assembly Minority Leader Pat Hickey, R-Reno, said: "I expect to hear the governor say with regard to Nevada’s economy and the recession that, ‘We have turned a corner, but not, THE corner.’

"I agree with the governor that Nevada’s recovery is not only gradual but also fragile," Hickey said. "Therefore, what money we can prioritize should be for education and economic development."

Hickey said he would like to see Sandoval’s budget include seed money for the Knowledge Fund for higher education institutions, although he acknowledged he does not know whether there will be such an allocation.

The Knowledge Fund for commercial research at the Nevada System of Higher Education was created by the 2011 Legislature, but did not receive any funding in the current budget.

State Sen. Debbie Smith, D-Sparks, the new chairwoman of the Senate Finance Committee, said she is not optimistic there will be much money for new programs.

"We’ll probably see some minor additions to K-12 spending and a few improvements in mental health," she said. "But beyond that, there’s not a ton of extra revenue. So I don’t have my expectations that terribly high."

Smith said she is certain there won’t be enough revenue to recover from the cuts made to education and mental health spending over the past four years.

"We cut mental health alone by $80 million over the last four years," she said.

James Guthrie, state super­intendent of public instruction, said he is not privy to the details of Sandoval’s proposed budget either, but expects public education to be a major focus.

"Given the state of Nevada’s economy, education is going to be well-treated," Guthrie said.

The state is in the process of creating a merit pay system for teachers and principals, but Guthrie said it will take time to implement so it won’t be fully realized in the upcoming two-year budget.

He said other states that have tried to move forward quickly with such programs, including Florida, Texas and Massachusetts, have failed.

"We will be the first state that does it right," Guthrie said.

TAX DEBATE COULD BE SIGNIFICANT

The intensity of any tax discussions in the upcoming session might depend on the third branch of state government, the Nevada Supreme Court.

The Nevada State Education Association has submitted enough signatures to qualify a Texas-style margins tax initiative petition for consideration by the Legislature, but the proposal was challenged on technical grounds by a coalition of business groups. If the court rules the petition is valid, the Legislature will have 40 days to approve the measure or it will go to the voters in 2014.

The measure would impose a 2 percent margins tax on businesses with annual revenues of $1 million or more, raising an estimated $800 million a year for public education. The companies could be taxed whether they are profitable or not.

A court decision favoring the measure could give Democrats in the Legislature some leverage in any tax discussions because lawmakers have the ability to offer a competing tax measure for the ballot. Since lawmakers could do so with a simple majority vote, Democrats, who control the two houses, would have the power to make such a move unilaterally.

Assembly Speaker Marilyn Kirkpatrick, D-North Las Vegas, said a discussion about alternatives to the margins tax will be part of the tax hearings that will start in Carson City next month. Taxing services and going after online sales tax revenue will be reviewed, among other ideas, she said, but there is no plan yet in place to push forward with an alternative revenue plan.

Even if Democrats push ahead on their own with an alternative tax measure in the Legislature, Sandoval’s approval ultimately would be required to place any competing measure on the ballot.

And Sandoval said he has no interest in pursuing any sort of new alternative revenue measure if the teachers’ petition is upheld.

Sandoval also said he would veto any bill coming to his desk to raise taxes.

"I’m opposed to any additional taxes in this state," he said.

Geoffrey Lawrence, deputy policy director for the conservative think tank Nevada Policy Research Institute, said he has also had a hard time getting a read on what Sandoval will talk about Wednesday.

"We’re hoping he will push for greater school choice and (Public Employees Retirement System) reform," Lawrence said. "He had a PERS proposal last session that didn’t go anywhere. It sounds like it will be closer to the top of his agenda for the 2013 session."

Sandoval has said the state needs to switch to a defined contribution plan for public employees to begin addressing the multibillion-dollar long-term unfunded liability of the retirement plan.

He also might propose changing the binding arbitration process for local government agencies and unions, and changing the prevailing wage requirements for most public works projects.

"I think for the most part we’re going to be on the same page on a majority of issues," Lawrence said.

But Democratic majorities in both the Senate and Assembly could make such reforms difficult to achieve, he said.

Former Democratic state Sen. Sheila Leslie, who this past week presented the views of the Progressive Leadership Alliance of Nevada on the state of Nevada ahead of Sandoval’s speech, said she expects a status quo budget that won’t do enough to improve public education or help stimulate the state economy. PLAN is an umbrella advocacy organization that represents more than 40 liberal-leaning groups in Nevada.

Even with an extension of a package of expiring taxes, the best Nevada can hope for is avoiding further cuts to education and other critical programs, Leslie said.

Sandoval needs to use some of his considerable political capital to work with the Legislature on tax reform, including seeking additional revenue from corporations, Leslie said. If there were such an effort, Nevada would look considerably different, in a positive way, in 10 years’ time, Leslie said.