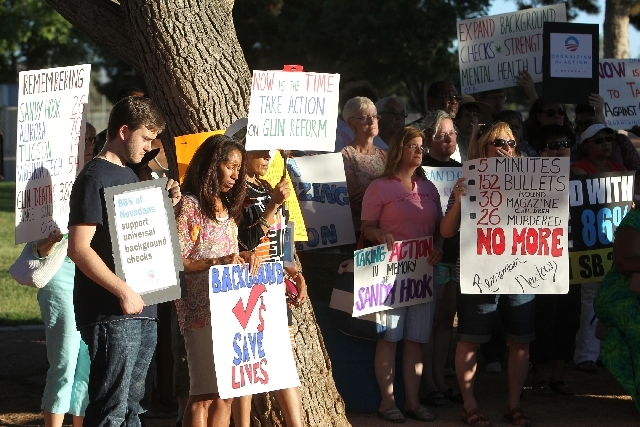 “While I support enhanced reporting requirements concerning mentally ill persons, the provision of Senate Bill 221 pertaining to background checks for the private sale and transfer of firearms constitute an erosion of Nevadans’ Second Amendment rights under the United States Constitution and may subject otherwise law-abiding citizens to criminal prosecution,” said Sandoval, a former federal judge, in his veto message.

He said that if the bill had become law, someone selling a firearm to a family member would have to secure a background check of that family member before selling the weapon. He said the bill would have imposed “unreasonable burdens and harsh penalties upon law-abiding Nevadans, while doing little to prevent criminals from unlawfully obtaining guns.”

Under the bill, people who would not submit to background checks could have been charged with criminal offenses.

Since the legislative session adjourned June 4, more than 100,000 people have called Sandoval’s Carson City office to urge him to vote for or against the bill. The National Rifle Association had advised its members to call and make their views know. By better than a 3-to-1 margin, callers wanted the veto, a veto Sandoval had promised for weeks.

SB221 passed through the Democrat-controlled Legislature with all 25 Republicans voting no, with four of the 38 Democrats.

The bill would have required people buying firearms to submit to a background check before they could claim their firearms, even if they bought them at gun shows or through private parties. They would have had to pay as much as $30 to go through the background checks at licensed gun dealers. Judges would have had to report to the state criminal history repository within five days when anyone was adjudicated with mental problems.

“I am deeply disappointed that Governor Sandoval has joined with legislative Republicans in obstructing common-sense legislation to keep dangerous weapons out of the hands of criminals and those with severe mental illnesses,” said Sen. Justin Jones, D-Las Vegas. “Despite the governor’s decision, I am grateful to my Democrat colleagues who courageously stood with the 86 percent of Nevadans who support universal background checks.”

Jones intends to reintroduce the bill in the next legislative session in 2015.

The Mayors Against Illegal Guns, an anti-gun violence organization created by New York Mayor Michael Bloomberg, released a poll in early March that found 86 percent of Nevadans support expanding gun background checks to all buyers. The poll of 800 voters was conducted Feb. 10-14 by Schoen LLC.

Sandoval’s veto will hurt him in securing moderate Republican and independent votes in his 2014 re-election campaign, according to Fred Lokken, a political science professor at Truckee Meadows Community College in Reno.

Lokken said 18 percent of voters are conservative Republicans who overwhelmingly favored the veto. But these people have no choice but to support Sandoval in his re-election bid because no Republican will beat him in the primary and the Democrats will not field a pro-gun candidate.

“The moderate Republicans and independents will be offended by the veto, while the conservatives have no other choice than him,” Lokken said. “Overall, I think it hurts him. He is no shoo-in for re-election. In a close race, it could make a difference.”

“With this veto Sandoval has kept it legal for criminals, domestic abusers and the dangerously mentally ill to easily and legally buy as many guns as they want with no background check,” Fadie said. “Think about that. Right now in Nevada someone convicted of robbery or assault with a deadly weapon can go to a gun show and buy as many guns as they want from an unlicensed dealer.

The governors of Colorado and Connecticut in April approved universal background check bills, which now are law in seven states. But Congress has failed in its attempts to pass a similar law.

Dan Reid, the NRA’s Nevada lobbyist, hailed the veto, saying it was the right decision and the decision favored by most Nevadans, contrary to the poll by Mayors Against Illegal Guns.

He said his organization has tens of thousands of Nevada members who were “engaged” in trying to kill the bill.

Reid said the gun control bill “just won’t work.” He said that California has had legislation similar to SB221 for decades, and “still criminals find a way to operate.” During hearings, Reid said most of the bill’s supporters came from other states, while the opponents were almost exclusively Nevadans.

Early in the legislative session, Jones said he introduced the bill at the request of friends and church members who were appalled by the deaths of 20 children and six educators in December at Sandy Hook Elementary School in Newtown, Conn.

Several parents of Sandy Hook children, with people present at the Jan. 8, 2011, Tucson, Ariz., shooting of former Rep. Gabrielle Giffords, showed up at a hearing on the bill in Carson City. Gifford’s husband, former astronaut Mark Kelly, also visited the capital to drum up support for Jones’ bill.

“The support of these family members of victims will forever remain as an inspiration to me and my colleagues to continue to work for increased public safety and responsible gun ownership,” Jones said. “As a father and as a legislator, I will continue to fight to pass universal background checks in Nevada because nothing is more important than keeping our children and our families safe.”