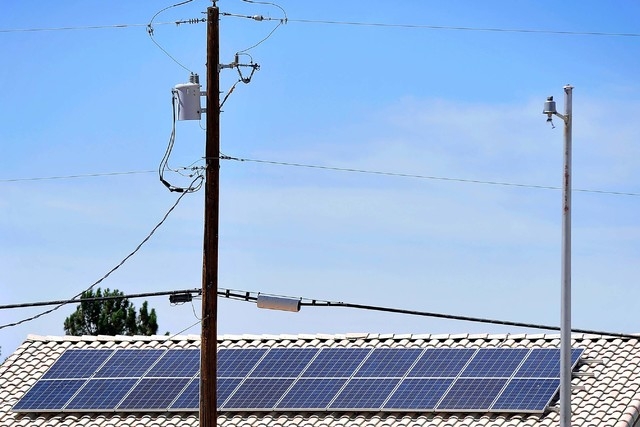 CARSON CITY — The Nevada Senate on Sunday unanimously approved a bill that puts state regulators in charge of deciding how to credit rooftop solar homeowners for electricity generation without shifting costs to other utility customers.

Senate Bill 374 passed 21-0, a day after it was amended on the Senate floor. It goes to the Assembly.

Current state law imposes a 3 percent cap on net metering — credit that rooftop solar homeowners receive on their utility bill for excess power they generate and add back to the electric grid.

Representative of rooftop solar companies have pushed this session to raise the 3 percent cap, arguing that without financial incentives, homeowners will shun solar energy and the industry that brings 6,000 jobs will short out.

But NV Energy counters that net metering is not necessary for the solar industry to survive and that other utility customers are subsidizing solar though generators of rooftop solar still use the utility’s infrastructure for distribution.

Under the bill, the PUC would conduct by July 31 an analysis of appropriate costs and subsidies for solar generation. It also authorizes the commission to establish a new rate class to reflect “just and reasonable rates and charges” for rooftop solar customers that don’t unreasonably shift costs to other users.

Bryan Miller, co-chairman of an industry group, The Alliance for Solar Choice, said the industry should have been allowed to comment on the amended version of the bill before the Senate vote.

“The Nevada Coalition to Protect Ratepayers and the thousands of solar employees we represent have anticipated a public hearing concerning the future of rooftop solar. To this date we have not received one,” Miller said in a statement.