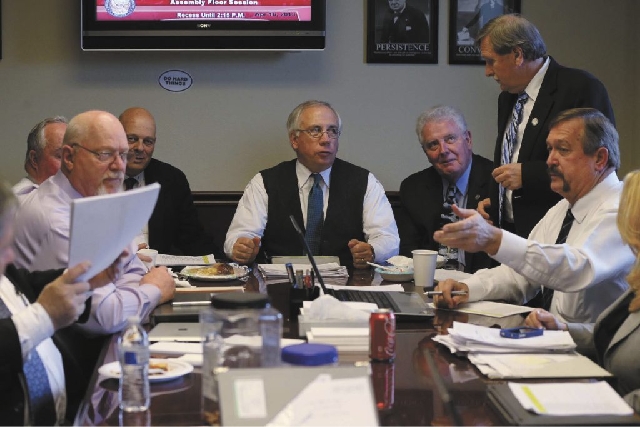 Nevada Assembly Republicans caucus at the Legislative Building in Carson City on Tuesday. Lawmakers continue to work as a hundreds of bills await votes on the floor and another bill deadline looms next week.

CARSON CITY — A resolution that could lead to annual sessions for the Nevada Legislature won approval Tuesday in the state Senate on a straight party-line vote.

The vote on Senate Joint Resolution 8 was 11-10, with Democrats in support and Republicans opposed. The resolution will be considered in the Assembly.

The resolution had received GOP support in committee from Sen. Barbara Cegavske, R-Las Vegas. But she said during the floor discussion that additional changes were needed to the proposal before she could support it, and she changed her vote to no.

The proposal would also allow the Legislature to meet outside of the capital, and Cegavske expressed concerns about the cost of doing so given the lack of facilities in Las Vegas to accommodate the full Legislature.

The proposal to amend the state constitution has a long way to go before the Legislature could start meeting every year. It will have to be approved in this session of the Legislature and again in 2015 and then be approved by voters in 2016 before it could take effect.

The resolution proposes to change the state constitution to allow limited annual sessions of 90 legislative days in odd-numbered years and 30 days in even-numbered years.

The constitution now requires the Legislature to meet every other year for no more than 120 days.

The bill was sponsored by Sen. Tick Segerblom and Assemblywoman Lucy Flores, both D-Las Vegas. The bill’s approval could lead to legislative sessions being held in Las Vegas.

The constitution requires the Legislature to meet in the capital, but some committee hearings have been held in Las Vegas.

That provision would be repealed in SJR8 and allow lawmakers to conduct business elsewhere if a majority of lawmakers in both houses agreed to do so.

Several senators from Southern Nevada have voiced support for holding the shorter sessions in Las Vegas if the change is approved by voters.

The resolution would repeal a 60-day limit on pay for lawmakers now in the constitution. That repeal could lead to a pay hike for lawmakers unless they voted to change their rate of pay, which is just under $150 a day.

Lawmakers receive about $9,000 for the first 60 days of the current sessions and no pay thereafter. Eliminating the 60-day limitation in the constitution could double lawmaker pay because they would be compensated for the full 90- and 30-day sessions.

Segerblom said the pay issue will have to be addressed by lawmakers. But he will be bringing legislation forward this session to establish a commission to review the issue of lawmaker pay and report back to lawmakers in 2015.

The resolution originally proposed paying lawmakers $24,000 a year, but the pay provision was removed.

In arguing for passage, Segerblom said Nevada is a big state with complex problems that no longer can afford to meet only every other year.

He also assured his colleagues that the measure would not move the state capital to Las Vegas .