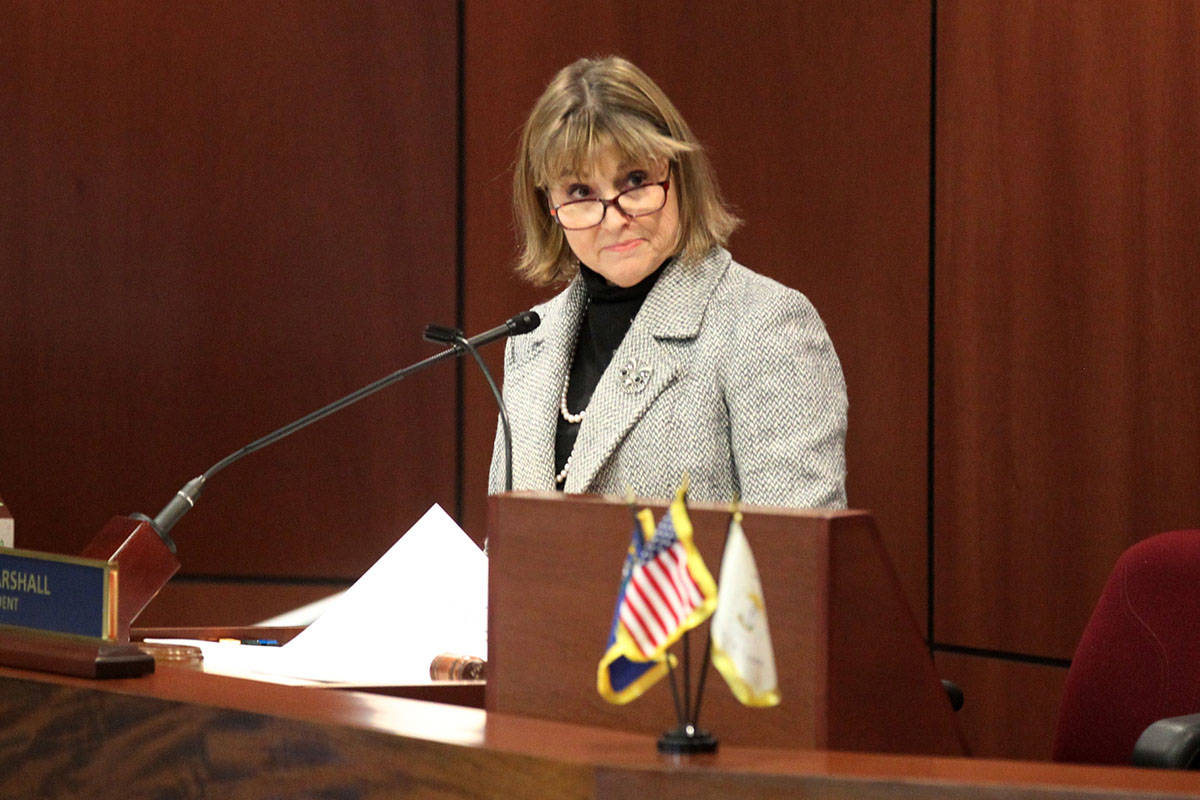 Lt. Gov. Kate Marshall presides over the Senate the Legislative Building in Carson City on the first day of the 80th session of the Nevada Legislature Monday, Feb. 4, 2019. (K.M. Cannon/Las Vegas Review-Journal) @KMCannonPhoto

Gov. Steve Sisolak on Tuesday congratulated Lt. Gov. Kate Marshall on her pending transition to a position in the Biden administration and said he had received numerous inquiries from people seeking appointment to the pending vacancy.

Marshall, 62, did not publicly confirm the appointment until Thursday. Elected to her current post in 2018, she will serve as senior adviser to governors within the White House Office of Intergovernmental Affairs. In her statement Thursday, Marshall said she would continue to serve as lieutenant governor until the late fall.

The timing of her departure seemingly takes into account a pending special session of the Legislature expected to be convened in the fall to redraw legislative district lines. Marshall, as lieutenant governor, presides over the state Senate when the Legislature is in session.

“I have served this state I love for more than ten years in elected office,” she said. “Working with and for Nevadans fills me with hope and gives me faith for the future.”

The White House released a statement from Julie Rodriguez, Director of Office of Intergovernmental Affairs, who called Marshall “a tireless and effective public servant for Nevada families,” adding that Marshall’s experience with Nevada’s response to the COVID-19 pandemic “will bolster the Administration’s continued efforts to fight the pandemic and get as many Americans vaccinated as possible.” Rodriguez also noted Marshall’s economic development and small business work, calling it “integral to President Biden’s efforts to implement the American Rescue Plan and the full Build Back Better agenda.”

Sisolak, after congratulating Marshall on Tuesday, said he had received “numerous phone calls and emails and texts and expressions of interest” from people seeking appointment to the post. The governor does not have to appointment a replacement.

“No idea. At this time, I really don’t,” the governor said when asked about an appointment. “We’ve got an election coming in 15 months so we’ll see. We’ll have a special session in a couple months and I don’t know if we can leave it open for that, but it’s something I’ll talk to my team about it and we’ll move forward on that. “

Marshall was elected state treasurer in 2006 and served two four-year terms, leaving the post due to term limits. She ran unsuccessfully for Congress in 2011. A San Francisco native, she earned her undergraduate and law degrees from the University of California, Berkeley, and worked for the U.S. Justice Department before coming to Nevada in 1997 to work in the Attorney General’s office, where she set up the state antitrust division. Marshall endorsed Biden’s bid for the presidency in February 2020.

Marshall’s lengthy statement included praise for each of her staff members.

“Though I will soon head to our nation’s capital to serve this Administration, I shall always be a westerner,” she said.