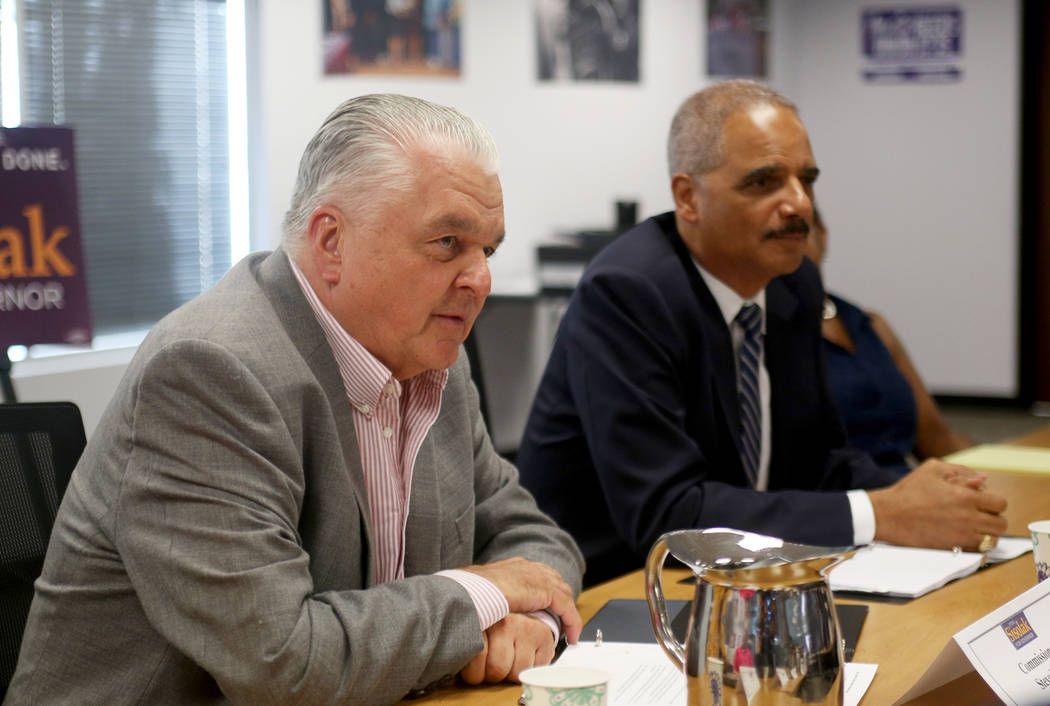 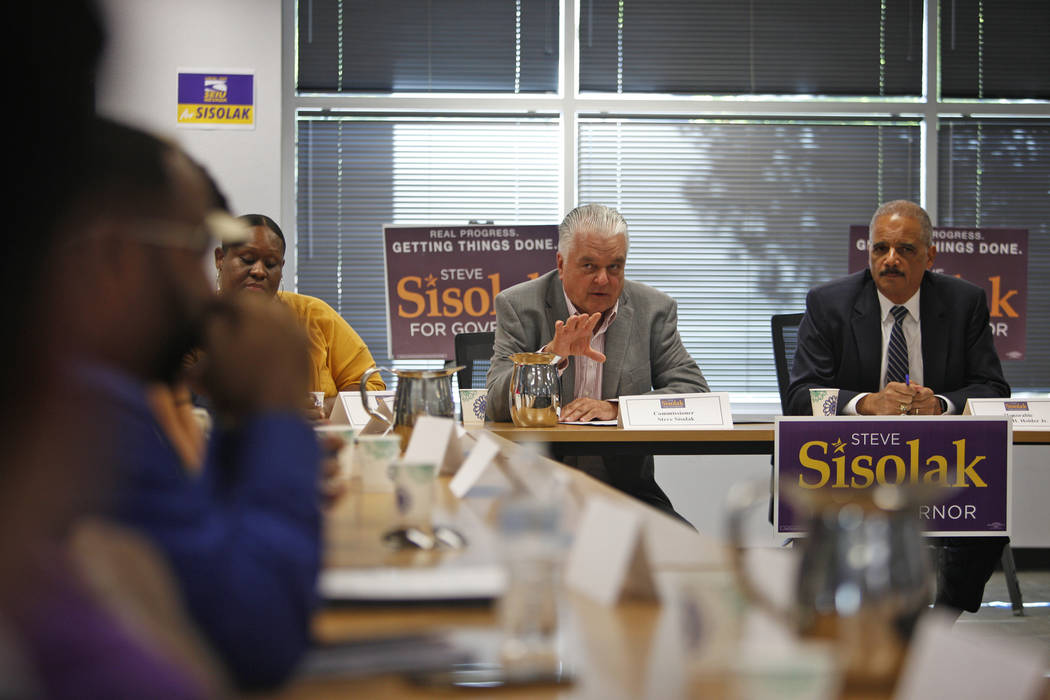 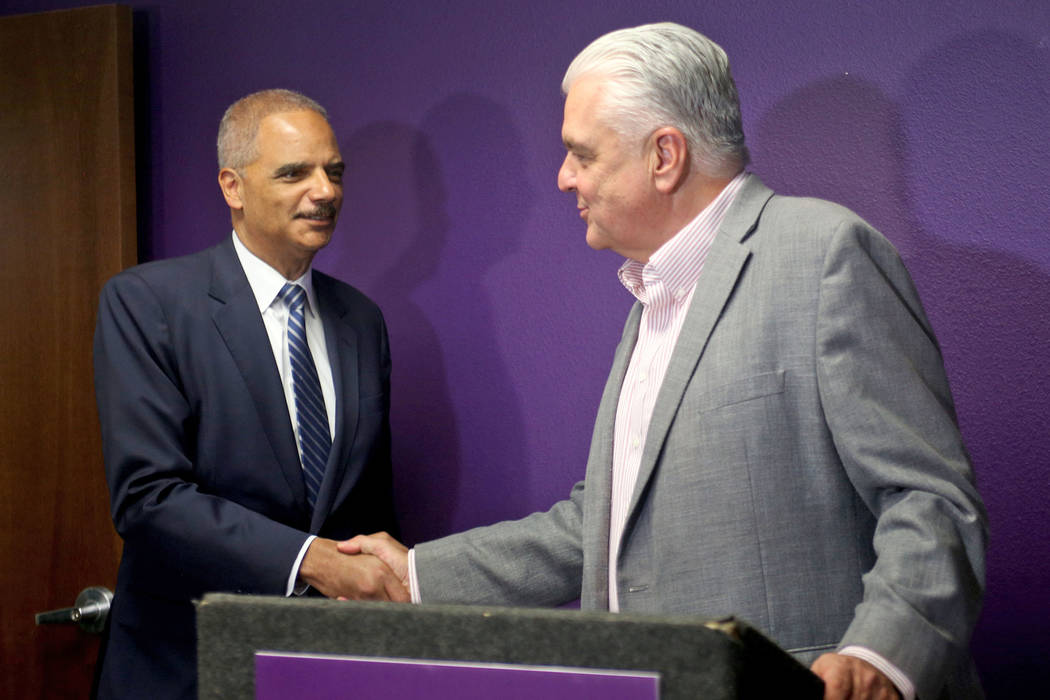 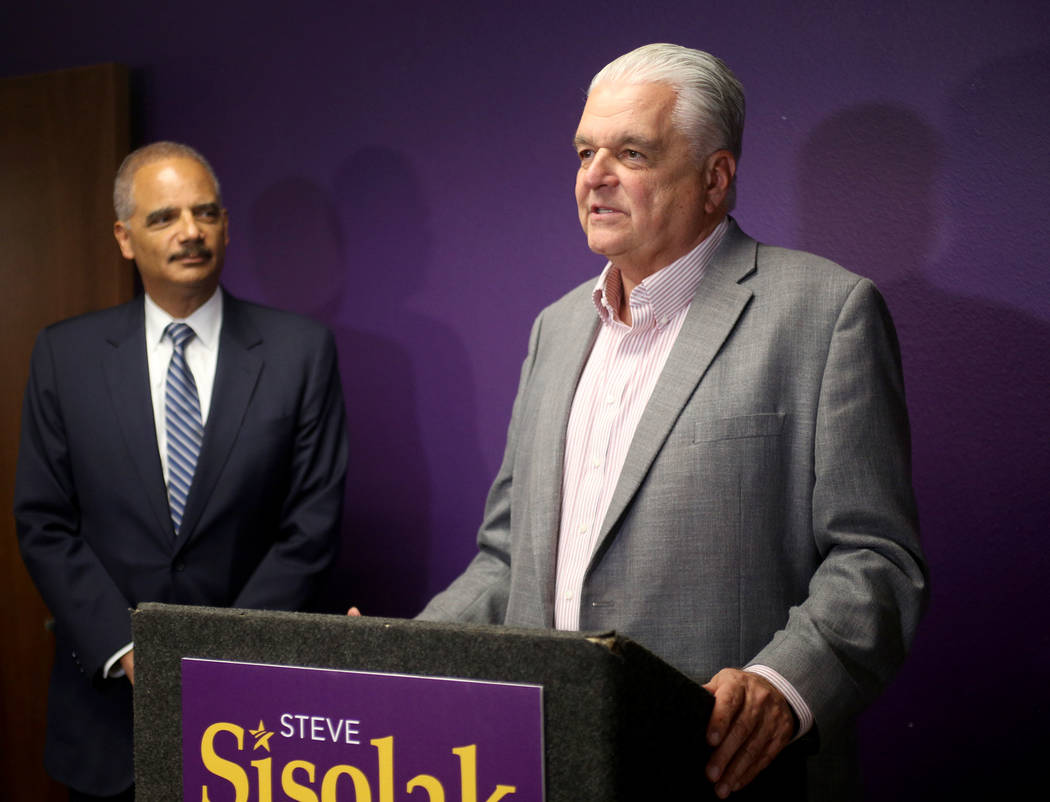 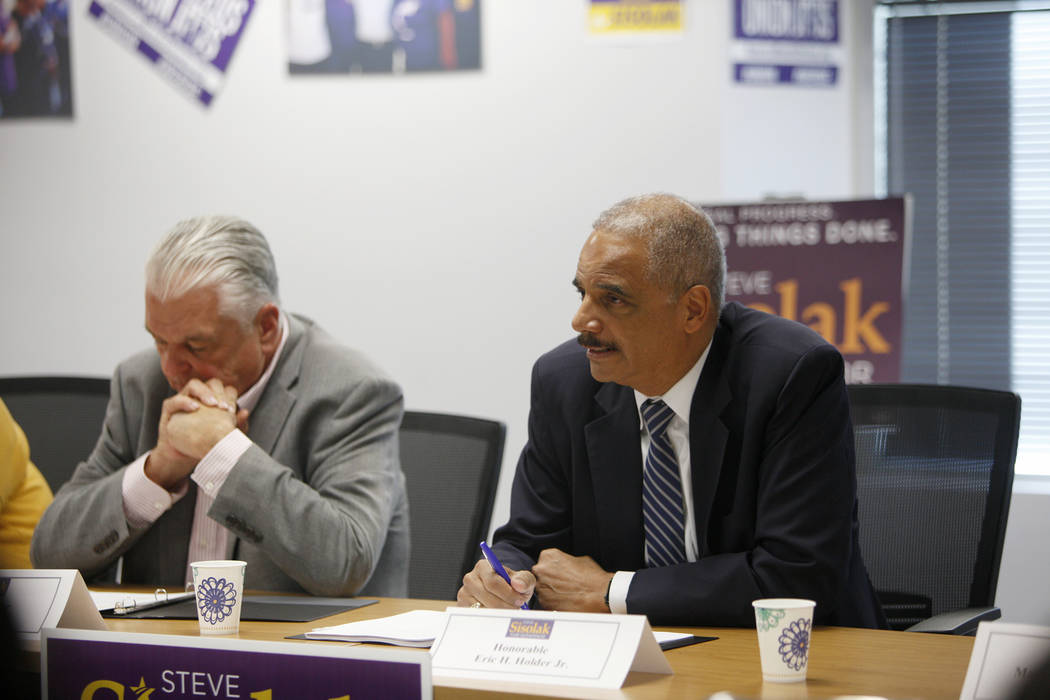 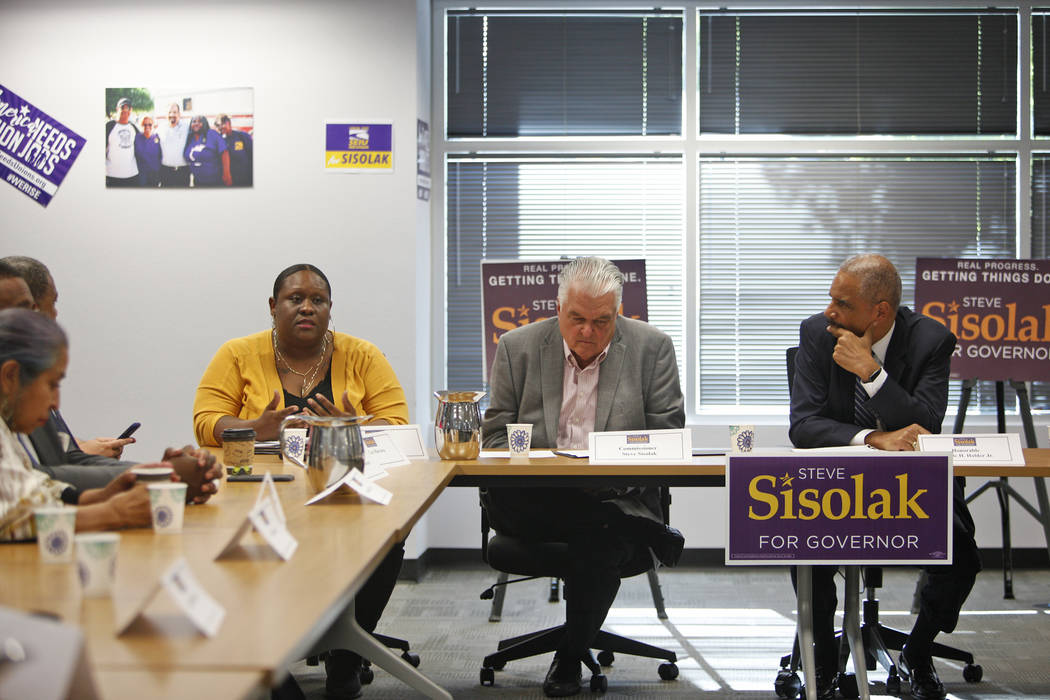 Leslie Turner, from left, an organizer with Mass Liberation that aims to reform the criminal justice system, tells her story to a roundtable that included Commissioner Steve Sisolak and Attorney General Eric Holder at the Service Employees International Union Local 1107 offices in Las Vegas, Thursday, Sept. 6, 2018. Turner said it was imperative that people that are affected by the system be at the table for reform and that's why she is committed to activism after being arrested for traffic tickets. Rachel Aston Las Vegas Review-Journal @rookie__rae 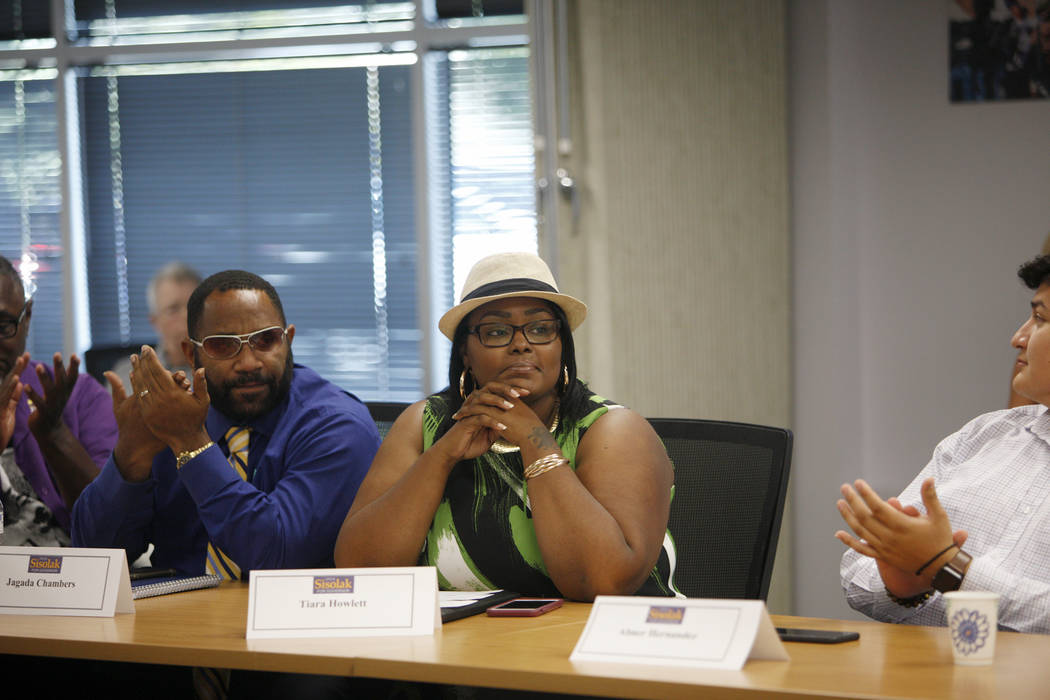 The room applauds Tiara Howlett after she told her story of how the criminal justice system disrupted her life and the Mass Liberation group was able to release her from jail at a roundtable that included Former Attorney General Eric Holder and Commissioner Steve Sisolak at the Service Employees International Union Local 1107 offices in Las Vegas, Thursday, Sept. 6, 2018. Rachel Aston Las Vegas Review-Journal @rookie__rae 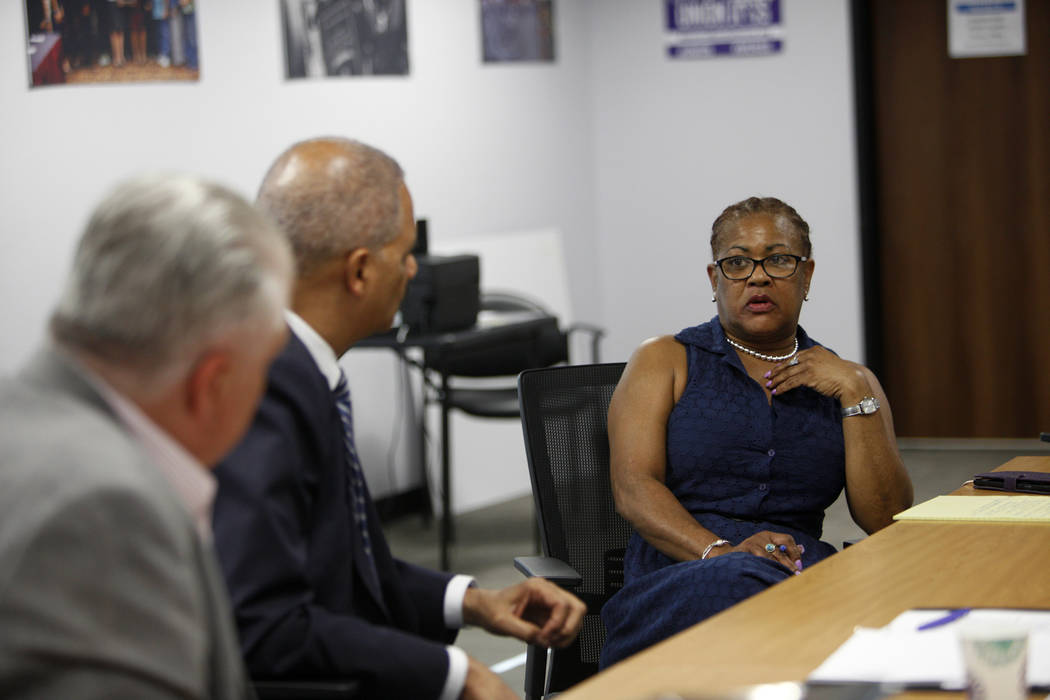 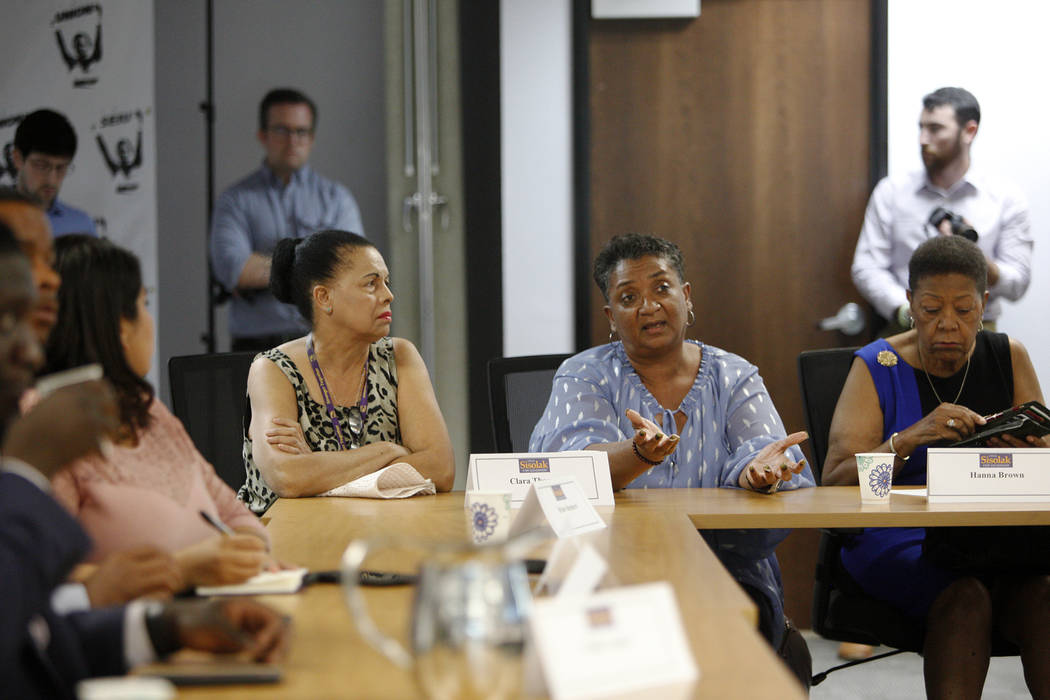 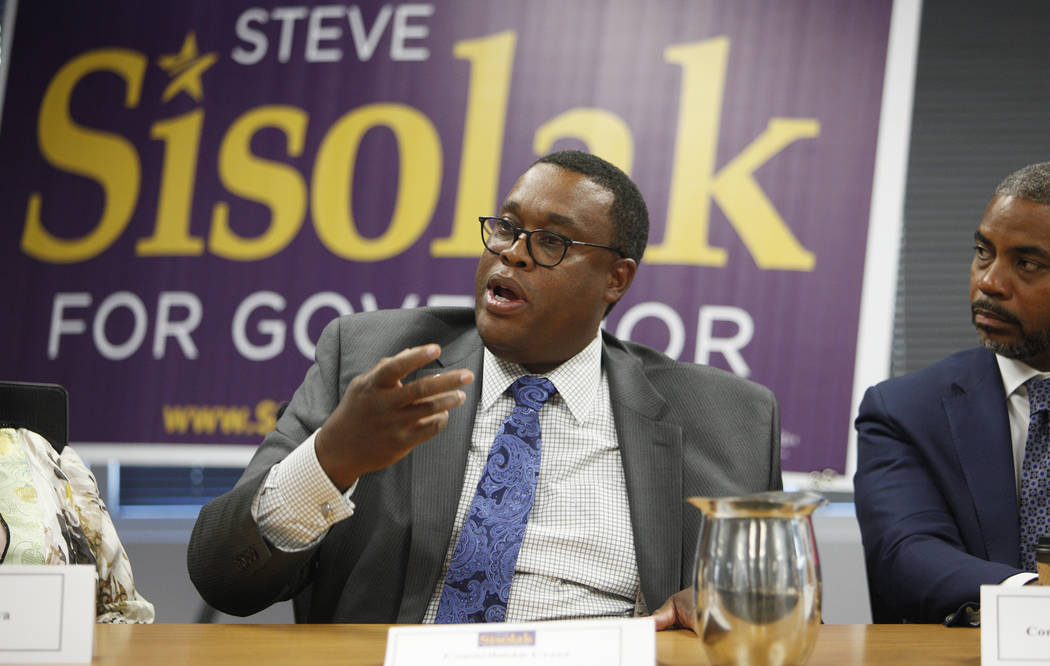 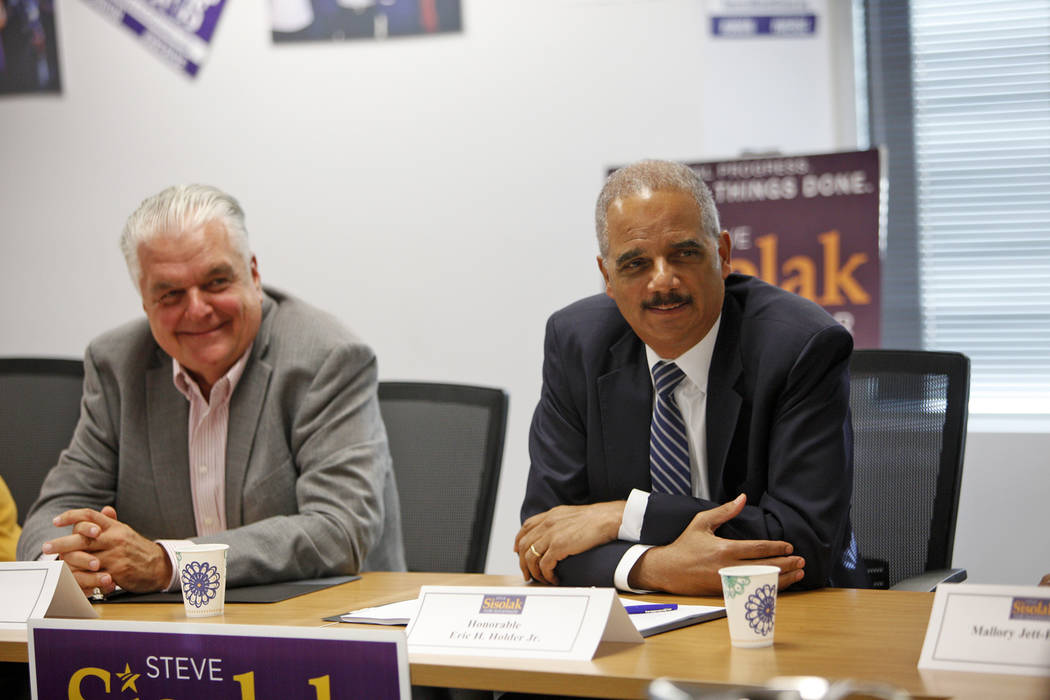 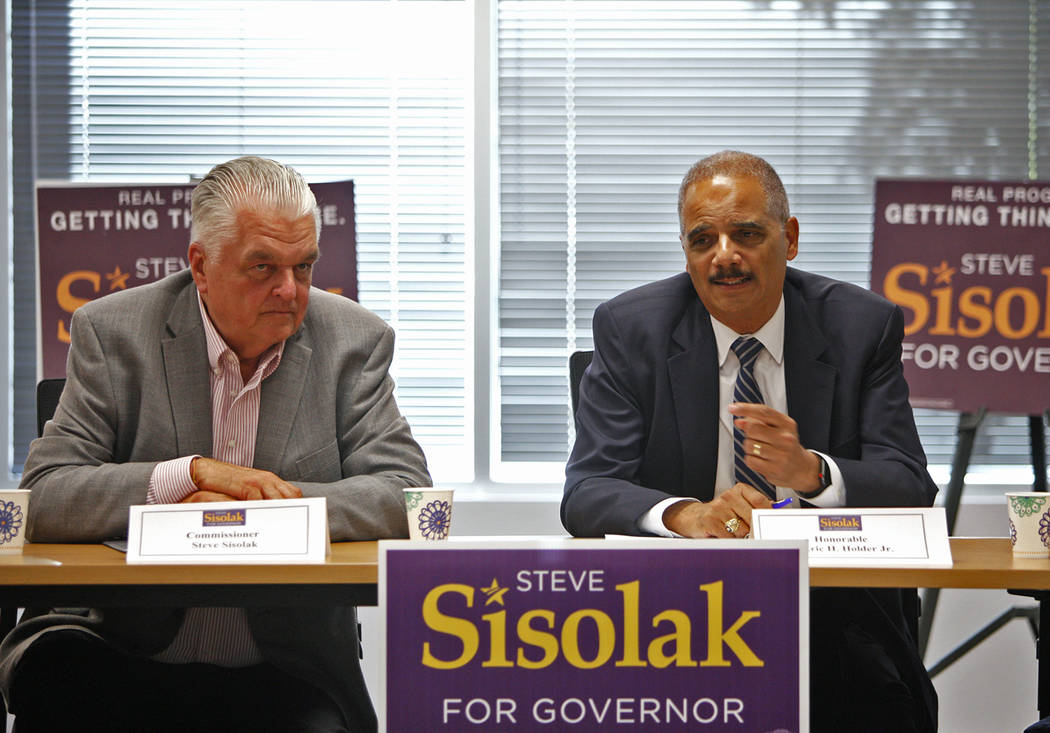 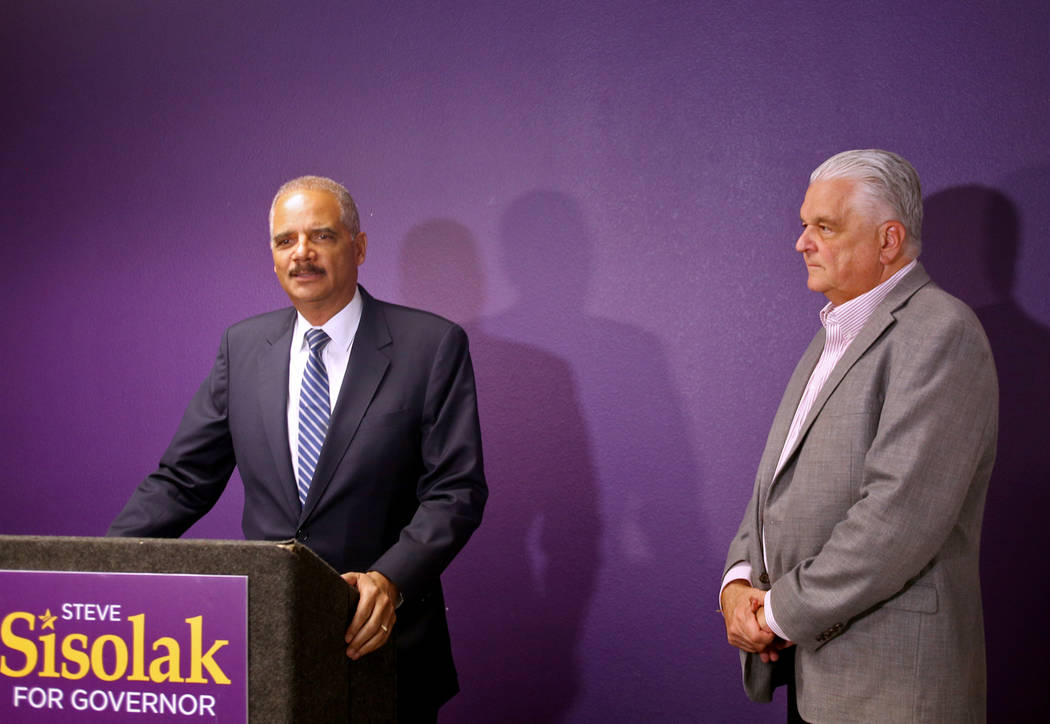 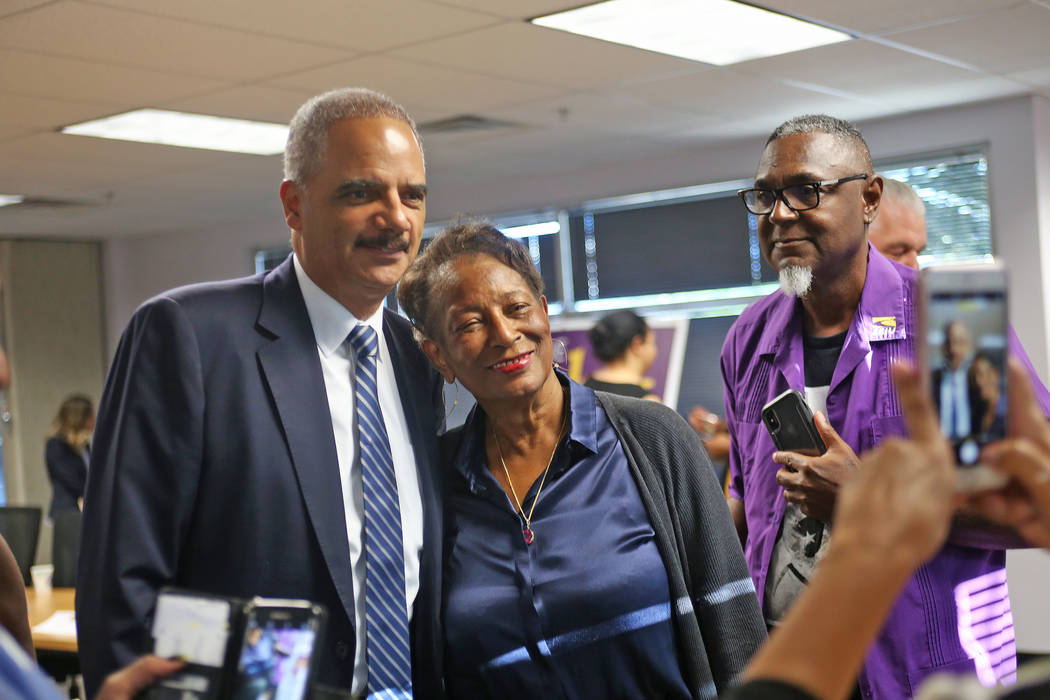 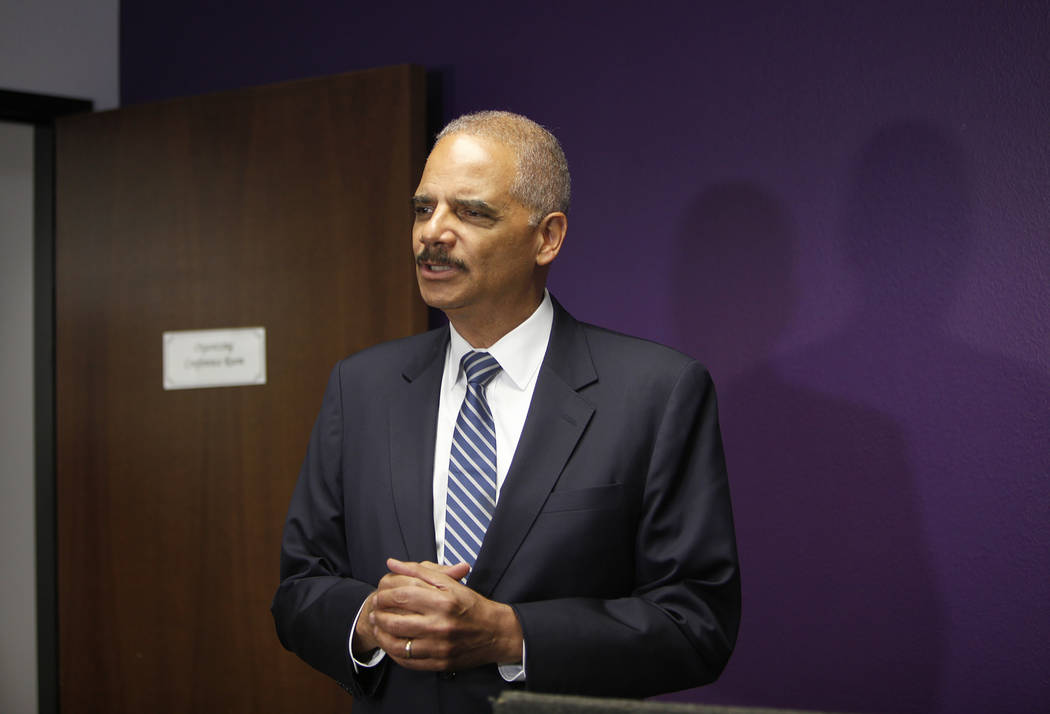 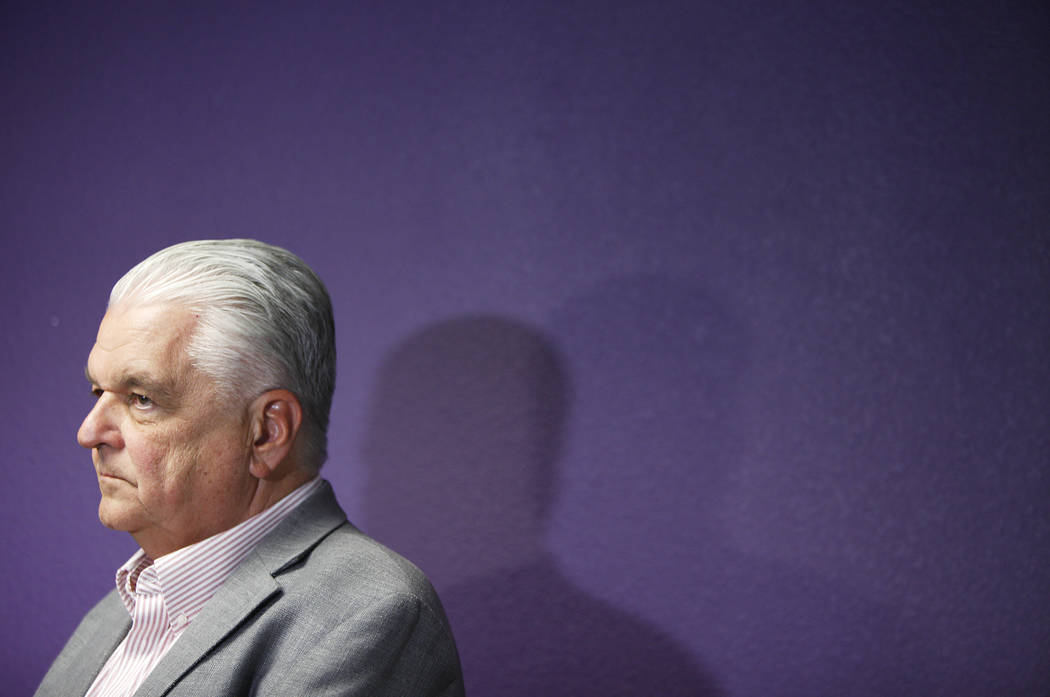 They talked about bail reform and reducing incarceration rates among other issues during a roundtable discussion Thursday evening at the Las Vegas offices of the Service Employees International Union Nevada Local 1107.

A fair criminal justice system is one that breeds respect and holds accountable those who commit serious crimes and those who prosecute them, Holder told the group of community members and leaders.

“Tough on crime” reforms foster disrespect in a justice system that already incarcerates too many people, Holder said. He touted his “Smart on Crime” initiative from his time as the head of the Department of Justice, an effort that targeted serious offenses and worked to fairly enforce laws.

“You can keep people safe while having a more fair criminal justice system,” said Holder, who endorsed Sisolak for governor prior to the discussion.

Current justice system features such as cash bail hurt those who don’t have the ability to pay their way out of jail, he said.

In Washington D.C., defendants are not held behind bars because of an inability to pay, he said. Instead, defendants are held based on whether they are a danger to the community or a risk to skip a court date.

Sisolak said incarceration can cost someone a job or housing, which in turn can impact a defendant’s family. Charge-stacking, or the practice of charging people with several counts in the hopes of securing a conviction, is particularly offensive and adds another layer to the problem, he said.

“Something needs to be done,” said Sisolak, who is chairman of the Clark County Commission.

Responding to reporters after the discussion, Sisolak said he was “willing to go pretty far” in terms of bail reform, and that he would take a look at proposed reforms that came through the Legislature.

“That’s something that I would certainly entertain on a minor offense that might be too severe,” Sisolak said of eliminating cash bail in the state. He said he would “entertain” the idea of restoring voting rights for felons, but wouldn’t support letting those in prison vote because they hadn’t finished serving their sentences.

Participants in the roundtable shared stories of personal hardship brought about by their experiences with the criminal justice system.

One woman, Leslie Turner of the Progressive Leadership Alliance of Nevada’s mass liberation project, shared her story of an arrest for unpaid traffic tickets. She was pulled over for a broken taillight and jailed for a warrant. There she remained for more than a week, separated from her then-4-month-old son while her breast milk dried up.

“I just didn’t have the money to pay my tickets,” she said.

As part of her work, she and others have replaced taillights to help others avoid being pulled over by police and possible jail time. She said those adversely affected by the criminal justice system need to be included in the conversations on how to fix it.

“You cannot fix a system if you don’t know how it’s impacting the people on the ground that are living paycheck-to-paycheck, that are working minimum wage jobs, that are just trying to get by,” Turner said.