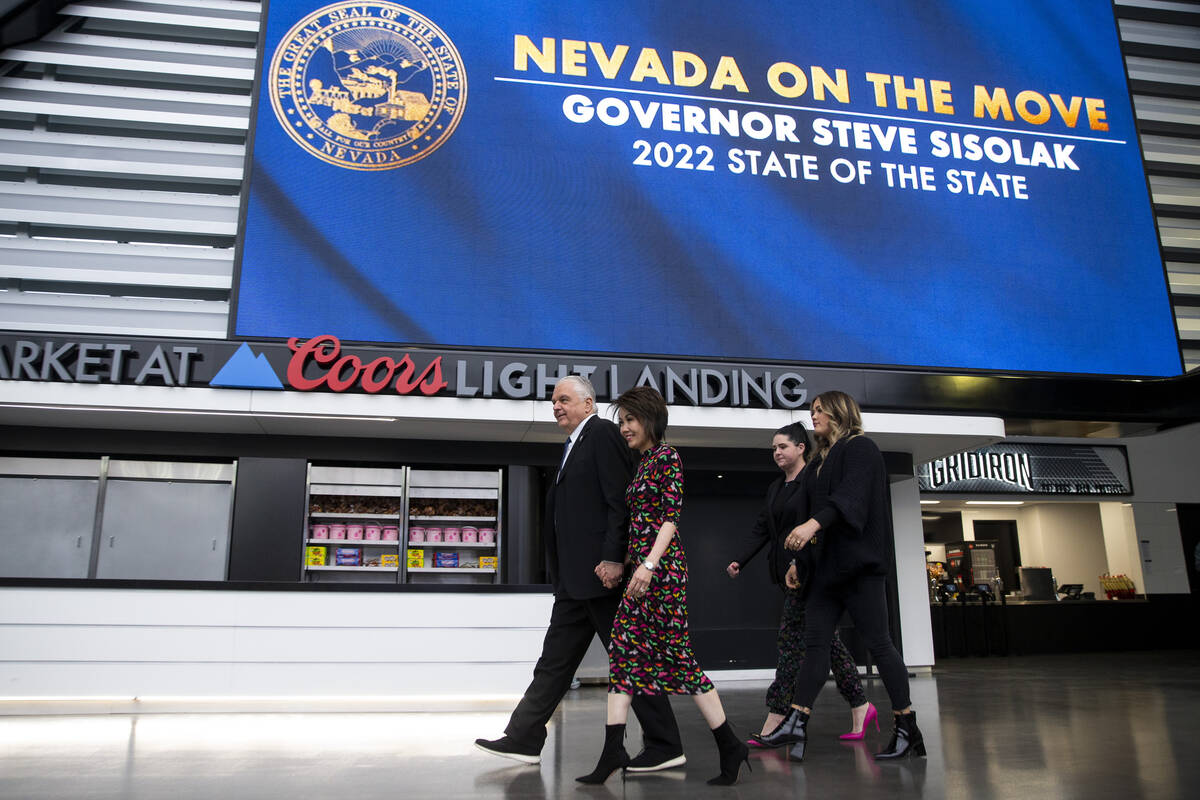 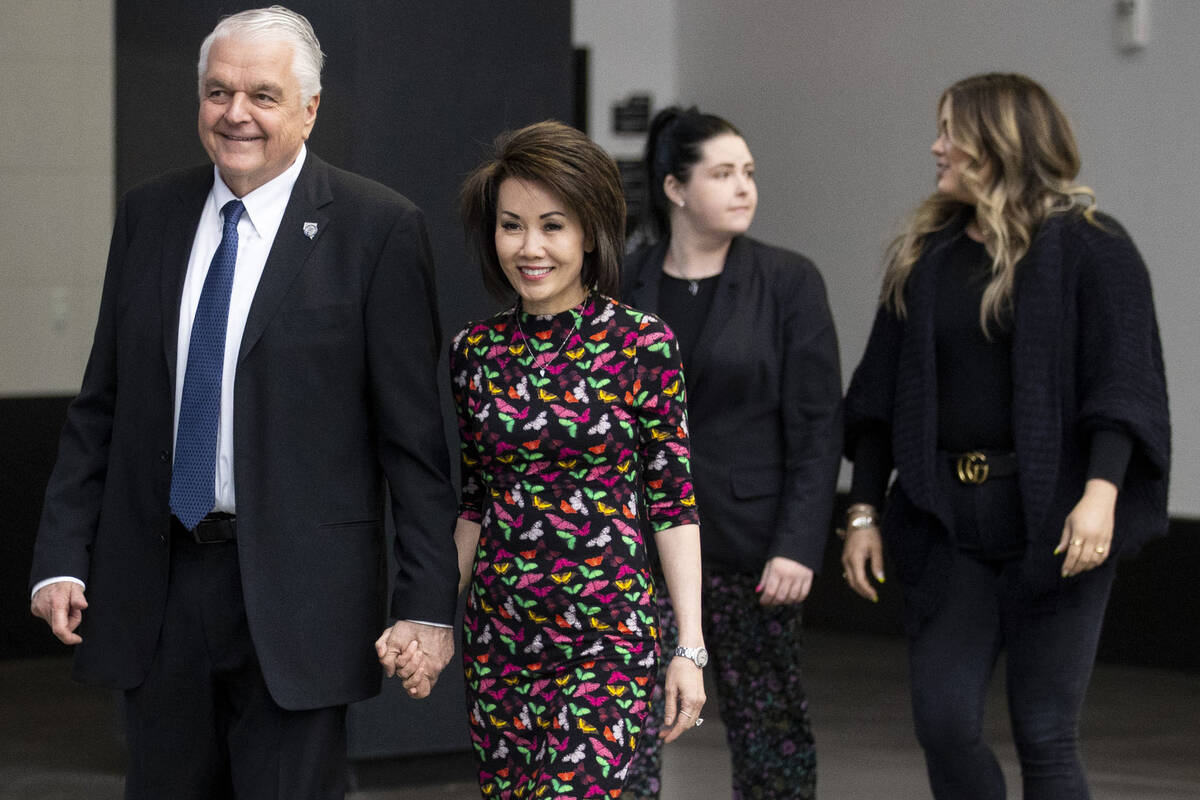 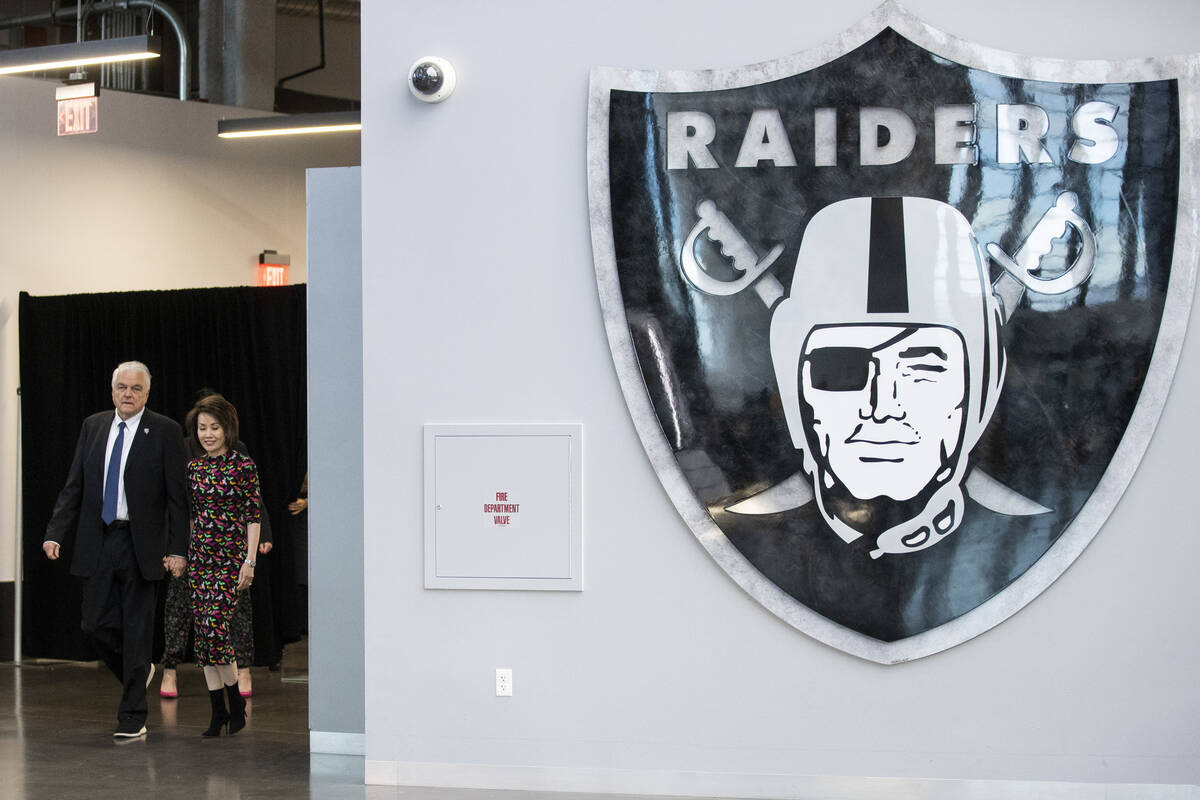 Gov. Steve Sisolak on Wednesday filled an empty Allegiant Stadium to the rim with optimism for Nevada’s continued recovery from pandemic hardships, pledging hundreds of millions of dollars to new programs benefiting middle-class families while recounting achievements of his first term in office as he heads into his bid for re-election.

The rare off-year State of the State address, delivered in the $1.9 billion Las Vegas stadium that Sisolak said “represents new jobs, new determination, new pride, and new progress for Nevada,” was billed as the Democratic governor’s opportunity to lay out the recovery road ahead — a road to be paved using part of the billions in federal pandemic aid Nevada has received.

Among specific big ticket items Sisolak proposed: $500 million each for affordable housing assistance and expanded statewide broadband infrastructure and $160 million in child care assistance, as well as free school lunches for all students next year.

The initiatives announced will be paid for, either all or in part, by using the $2.7 billion in discretionary general aid the state received under last year’s American Rescue Plan. Overall the state received more than $4.4 billion from that bill, $775 million of it going directly to local governments. About $900 million came with specific parameters on its use, such as for public health or rental assistance. Some $1.9 billion of the discretionary aid remains.

Casting the stadium as a symbol of the state’s staying power and resilience, Sisolak said: “We got this and a lot of other things accomplished in the middle of a pandemic, because despite dealing with the worst health crisis in a century, we kept going, people persevered, determined to get things done for Nevadans.”

Citing favorable economic statistics, Sisolak said the state’s economy “is one of the fastest growing in the country,” with tourism, wages and gaming revenues up — the latter at “an all-time high” — and unemployment declining. The state unemployment rate was at 6.4 percent in December, still the highest among states but down half a percent from the previous month and from 8.2 percent in December 2020.

Nevada’s still-uneven economy was the main subject of the governor’s speech. Pushing back on a subject his potential Republican challengers have seized on to attack him, the governor said Nevada added 94,000 jobs last year, the highest percentage increase among states. He said Las Vegas’ hotel room occupancy rates “are now higher than they were before the pandemic began,” that the city ranked near the top among metro areas in terms of new job postings, and that Reno had reached “historic employment levels.”

Noting that “the cost of everything is rising,” Sisolak said he couldn’t solve the national inflation problem but would “do everything in my power to help families with the rising cost of living,” including “holding the line on taxes.” He said the state had not raised taxes on residents since he took office and would not in the future.

Additionally, he proposed spending in the following areas:

The governor’s office said the programs would create up to 1,700 new affordable units, preserve up to 4,000 others for an additional 30 years, help middle income Nevadans with home ownership, and help more than 7,000 seniors by lowering costs for accessibility improvements and other repairs to help them stay in existing homes.

Child care: Sisolak announced an additional investment of $160 million in federal funds to lower child care costs for families and support child care providers. His office said the additional funds would double the number of families who receive financial assistance for child care.

Infrastructure: The governor pledged to leverage federal funds to spend $4 billion on upgrading roads, bridges, and water systems and $8 million on wildfire prevention. The state will invest $500 million in new broadband infrastructure to expand high-speed internet throughout the state.

The governor laid out proposals for health care, education and public safety as well, though not with specific funding levels attached:

Education: The governor said Nevada will use federal aid to provide free lunch for all students across the state for the next two years, look at how to expand free community college, apprenticeships and training programs for Nevadans, and expand the state’s Promise Scholarship program, which picks up college costs not covered by other scholarships.

Public safety: Sisolak said he would propose raises for state police officers, which would be their first significant pay hike since 2006.

Business: Sisolak announced initiatives to reduce bureaucratic hurdles arising from the state’s extensive occupational licensing procedures, and an accelerator program to help business start-ups get up and running and grow.

Climate: He announced a working group that would seek to develop a statewide heat strategy to counter climate change.

“I have never been more optimistic about our state or where we are going,” Sisolak said toward the end of his 20-minute remarks. “Despite two difficult years that have challenged every one of us, again and again I’ve seen incredible acts of kindness, heroic acts of selflessness and a determination to never stop moving forward.”

Former U.S. Sen. Dean Heller, one of the governor’s possible Republican challengers, said the “rambling speech in a gigantic sports arena does nothing to help the schoolchildren, working families, and small businesses that have been crushed by Steve Sisolak’s policies and lack of leadership.”

But others welcomed Sisolak’s priorities. Erika Castro, the organizing director of the Progressive Leadership Alliance of Nevada, said the speech prioritized people.

“In the midst of a growing housing crisis, rapidly warming planet, and on-going threats to our democracy, Nevadans — not corporations or billionaires — need to be the priority in policymakers’ decisions,” Castro said in a statement. “We are excited to hear Governor Sisolak announce huge investments into the community around housing, childcare, healthcare, workforce development, and education.”

Stadium management restricted photography and video by the media at the event due to ongoing event preparations. The heavy metal band Metallica is scheduled to perform at the stadium on Friday.