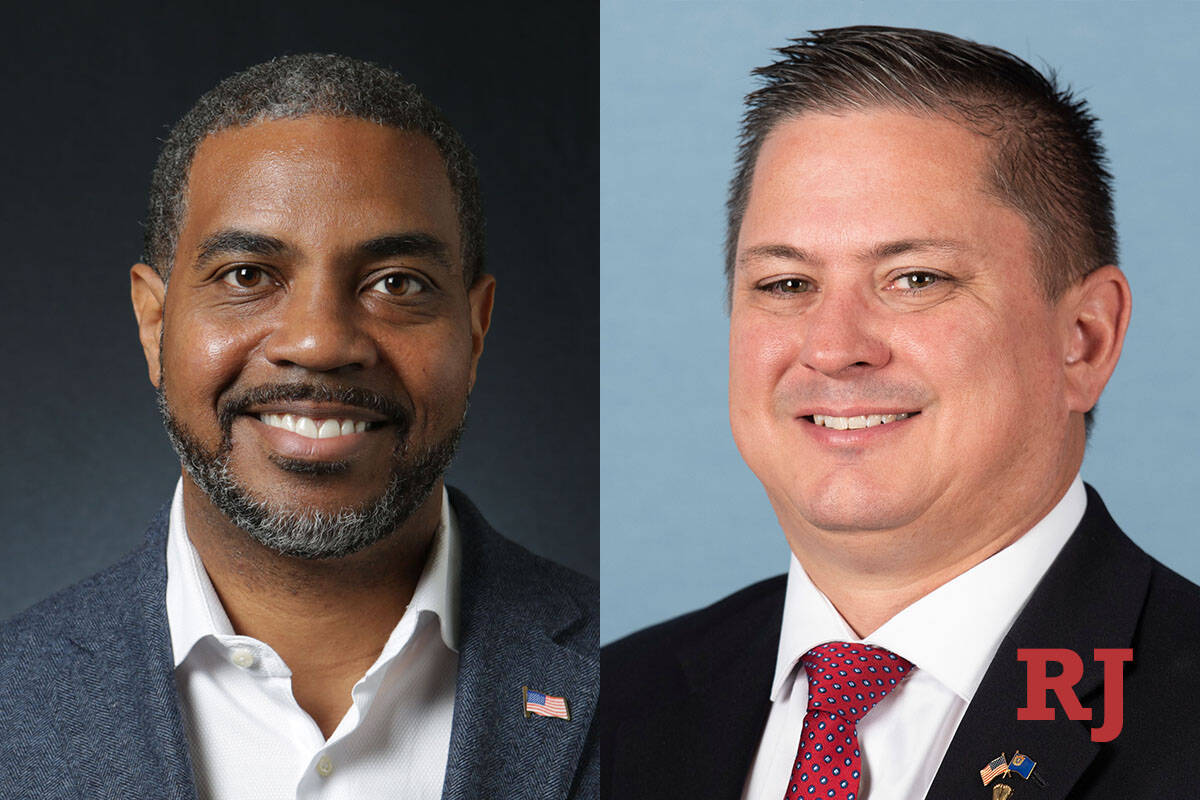 WASHINGTON — A slugfest is playing out in Nevada’s 4th Congressional District where U.S. Rep. Steven Horsford, touting his legislative accomplishments, is fending off Republican challenger Sam Peters, who has tapped into the Trump-era outrage over border security and crime.

It’s a competitive race and one that could help decide party control of the House of Representatives. Both have received help and endorsements from party leaders and surrogates.

Mudslinging has marred the race. The opening of a Democratic Congressional Campaign Committee office in Las Vegas where Horsford was in attendance drew a police response when armed Peters supporters protested. No citations were issued.

Beyond that, both candidates are making their case to voters that they are best to tackle issues that range from the economy, prescription drug costs and abortion to border security.

Horsford, D-Nev., told the Review-Journal he is running on his public service experience and his record of delivering for constituents in the far-flung district, which includes Mesquite, North Las Vegas, Pahrump and central Nevada rural counties.

“I know the people of this district because I’m rooted in this state. I have experience not only in Congress, but in the state Senate and leading a nonprofit for more than 10 years, as well as being a business owner,” Horsford, 49, told the Review-Journal.

A member of the tax-writing House Ways and Means Committee, Horsford wrote portions of the inflation reduction legislation that will lower the cost of prescription drug costs for seniors on Medicare, and extend subsidies for those who buy insurance on public exchanges.

It also included Horsford’s language to cap out-of-pocket costs of prescription drugs for seniors on Medicare at $2,000 per year. It also caps insulin costs at $35 per month.

The spending in the Inflation Reduction Act is offset by a 15-percent minimum corporate tax rate, and IRS funding to hire more agents to crack down on tax cheats and collect overdue tax revenue.

While Horsford wrote pieces of the legislation, the bill was largely drafted in the Senate and passed on a strict party line vote under budget reconciliation rules to avoid a Republican filibuster. It passed on a party-line vote in the House and later signed into law by President Joe Biden.

Peters, 47, and congressional Republicans have roundly attacked the spending bill over its tax provisions and have zeroed in on hiring of new IRS employees, warning of tax hikes and audits for middle-class earners and small businesses.

Those scenarios were dismissed by centrist analyst groups such as the Committee for a Responsible Federal Budget.

But Republican leaders and candidates cite an early Congressional Budget Office analysis that included a possible impact on middle-income earners. The GOP has ramped up rhetoric about IRS audits.

“When you put 87,000 new IRS agents on the streets, and you arm a number of them and you’re buying guns for the IRS, that doesn’t send a message to the public that they can trust their government,” Peters said.

Increased federal spending in recent bills by Democrats have resulted in double-digit inflation, which has hurt Nevada families, Peters said.

“That’s, you know, taking that money out of the household and off the table,” Peters said. “That’s a big deal.”

As a business owner with a degree in organizational finance, Peters said he would work with other Republicans to reduce spending and bring back energy independence to lower the cost of fuel impacting family finances.

Peters served 20 years in the Air Force and retired as a major. He received a Bronze Star for heroic achievement in Afghanistan.

He launched his first run for Congress two years ago but was defeated in the Republican Party primary seeking the nomination for Congressional District 4.

Peters has been endorsed by former President Donald Trump and Republican U.S. Reps. Andy Biggs and Paul Gosar, both of Arizona and both members of the conservative House Freedom Caucus.

Peters, meanwhile, has made border security a centerpiece of his campaign, with charges that the Biden administration and congressional Democrats have failed to provide enforcement needed to stanch illegal immigration and a flow of narcotics along the 2,000-mile southern border.

Peters said he went to El Paso and toured Customs and Border Protection facilities and found agents demoralized by the onslaught of contraband and humans crossing the Rio Grande. Workloads have increased for agents as others retire.

He said a Republican Congress would reverse that trend with additional funding for the agency. He also wants to resume building the border wall.

He supported legislation contained in the coronavirus relief bill to increase funding for police departments and first responders during and after the COVID-19 pandemic.

And he has voted to shore up communities with programs to create jobs and provide housing and rent protections for families who he said were concerned about “kitchen table issues.”

Horsford said he “takes pride” in his accomplishments across the district, including funding for a hospital and child care center in Tonopah. He also represents military installations in the state and is a member of the House Armed Services Committee.

The two candidates have opposite stances on the issue of abortion, with Horsford favoring abortion rights and Peters an anti-abortion candidate endorsed by right-to-life groups.

Horsford said the recent U.S. Supreme Court ruling that struck down the Roe v. Wade decision would set back women’s rights. The ruling also calls into question the privacy precedent that led to the 1973 landmark law and the legal foundation for same-sex and interracial marriage rulings.

Peters said he agreed with the recent ruling, which returned the question of abortion rights back to the states. Nevada voters ratified abortion rights in statute in a 1990 referendum.

“Democrats have mischaracterized my position,” Peters said, adding that he is not in favor of a national abortion ban.

Horsford has characterized Peters as a Make America Great Again extremist, and national Democrats have called Peters an 2020 election denier over his questions about Nevada results and supporting a move against the use of voting machines in this election.

“I’m not an election denier,” Peters said, adding that Joe Biden is the duly elected president after the 2020 election. He said he still has questions about how voting was conducted in the state and sees the need for voter ID, but he does not dispute the presidential outcome two years ago.

Meanwhile, Peters and national Republicans have accused Horsford of dereliction of duty and have referenced an extramarital affair that was disclosed two years ago and acknowledged by the congressman.

“I acknowledge the mistakes that I’ve made in my life. I’ve apologized to the people who have been directly impacted, and I’ve stayed focused on doing the job that the people in my district have asked me to do,” Horsford said.

Some nonpartisan political analysts like The Cook Political Report have rated the race a “toss-up,” while others like Sabato’s Crystal Ball have it rated as lean Democrat.

Campaign finance reports at the Federal Election Commission show Horsford raised $3.2 million and had $2.4 million in cash on hand after the June reporting period.