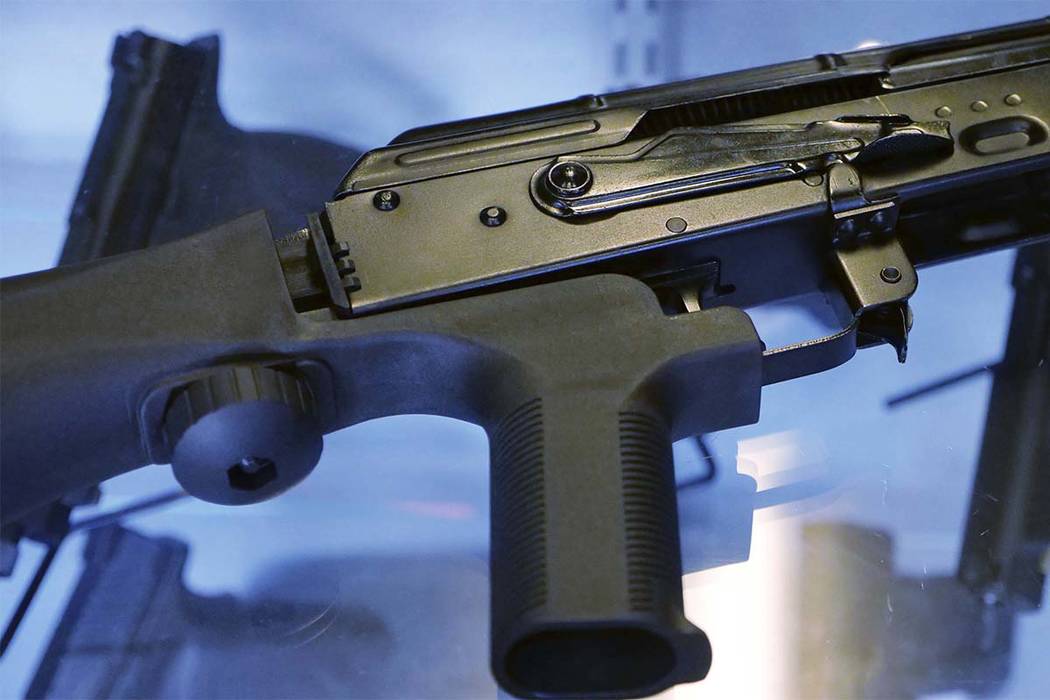 In this Oct. 4, 2017, photo, a device called a "bump stock" is attached to a semi-automatic rifle at the Gun Vault store and shooting range in South Jordan, Utah. The National Rifle Association announced its support on Oct. 5 for regulating the devices that can effectively convert semi-automatic rifles into fully automated weapons and that were apparently used in the Las Vegas massacre to lethal effect. It was a surprising shift for the leading gun industry group, which in recent years has resolutely opposed any gun regulations. Immediately afterward the White House, too, said it was open to such a change. (AP Photo/Rick Bowmer) 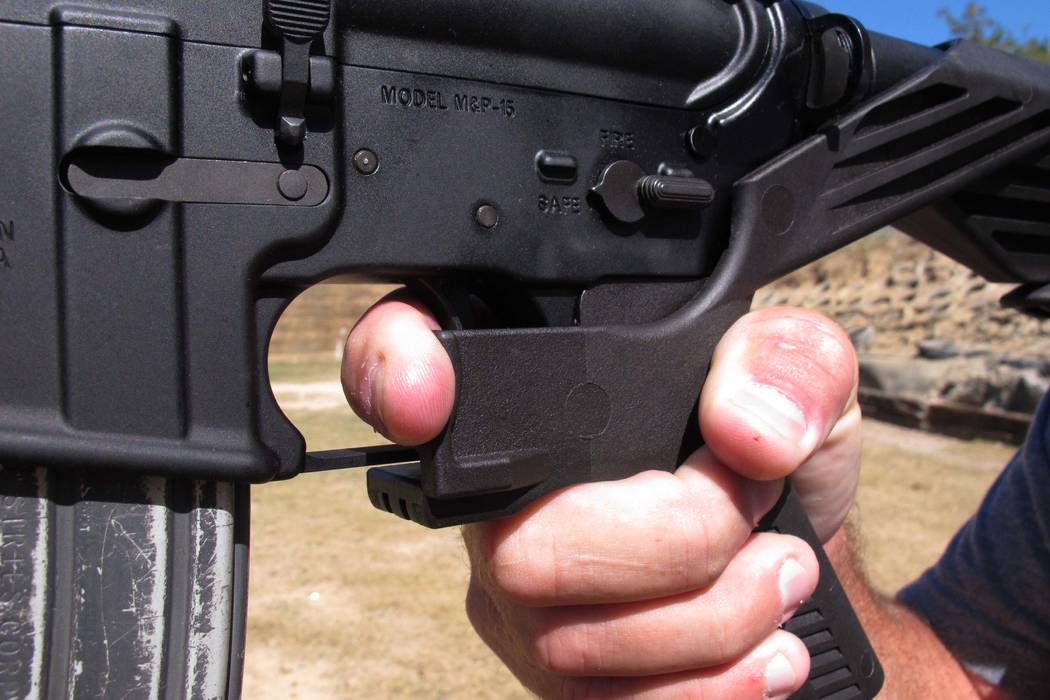 WASHINGTON — A bipartisan bill that would provide a framework to restrict and regulate “bump stocks” was filed Tuesday — a day before the one month anniversary of the Las Vegas Strip shooting massacre.

The bill filed by Rep. Brian Fitzpatrick, R-Pa., and Rep. Dina Titus, D-Nev., is one of several pieces of legislation filed in the aftermath of the Oct. 1 shooting that left 58 people dead and 546 others injured.

The bill provides the most elaborate framework to regulate the bump stock devices used by gunman Stephen Paddock, 64, to accelerate the rate of fire of semi-automatic rifles to mimic fully automatic weapons.

In effect, the Closing the Bump Stock Loophole Act would regulate the devices like machine guns and silencers.

Titus said she and colleagues developed the legislation “to regulate bump stocks or similar devices the same as machine guns and the deadliest of weapons.”

“I believe a majority of Americans would agree,” Titus said, “anyone who wants a device that modifies a firearm to shoot hundreds of rounds per minute should undergo thorough background checks and oversight.”

The legislation would require that anyone in possession or purchasing a bump stock register the devices with the Bureau of Alcohol, Tobacco, Firearms and Explosives (ATF).

“We must do everything in our power to prevent the kind of evil we see in horrifying incidents like the Las Vegas shootings,” Fitzpatrick said.

The Republican-led Congress has shown reluctance to take up gun control legislation. The last major gun control measure was passed when Democrats were in control of the House prior to 1994.

The Trump administration has instructed the ATF to review current rules concerning bump stocks, which have been found to be legal and can be purchased at stores.

Although many Republicans back the Trump administration’s approach, several GOP lawmakers back bills that would ban or regulate bump stocks.

The National Rifle Association, the largest group in the gun lobby, has said it backs regulatory review but not an outright legislative ban of bump stocks.

The bill filed by Fitzpatrick and Titus, co-sponsored by Reps. Dave Trott, R-Mich., and Dan Kildee, D-Mich., would place bump stocks under the same regulations that apply to machine guns and suppressors

Four weeks ago, our country experienced the deadliest mass shooting in modern American history, noted Michael Bouchard, president of the ATF Association, a group of current and former ATF employees.

“As former law enforcement professionals, it is difficult to swallow the fact that the horror of this event was exacerbated by the bump stock, a device engineered to avoid regulation under federal law — but unfortunately, it is not surprising,” Bouchard said.

Bouchard said he supports the bipartisan bill that would regulate bump stocks under the National Firearms Act and urged other lawmakers to back the legislation.

A bipartisan bill to ban the sale and manufacture of “bump stocks,” was filed in the House last month.

Curbelo said at the time that for the first time in decades, “There is a growing bipartisan consensus for sensible gun policy, a polarizing issue that has deeply divided Republicans and Democrats.”

The bill’s original cosponsors include 10 Republicans and 10 Democrats, including Rep. Ruben Kihuen and Rep. Jacky Rosen, both D-Nev.

Despite the Republican support, the ban called for in the Curbelo bill could doom its chances in the House.

Republican leaders in Congress have said they would be reluctant to bring up any gun legislation in this session.

The House and Senate have failed to repeal Obamacare, and are focusing on tax reform as they seek a first legislative victory for President Donald Trump.

Trott said that in the wake of the Las Vegas tragedy, he promised constituents to work to close the loophole that allows semi-automatic firearms to be modified to fire like illegal fully automatic weapons.

He said the bill filed with Fitzpatrick “ends the cycle of knee-jerk legislation, hastily thrown together in the wake of these all common tragedies.”

Trott called the bill a “proactive approach” that gives ATF the regulatory flexibility it needs to hold bump stocks to the highest level of scrutiny while protecting 2nd Amendment rights.