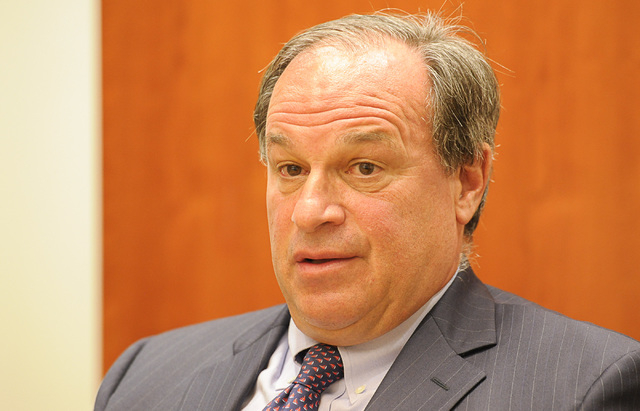 The idea isn’t to poke a stick in the governor’s political eye, the two officials said, but to demonstrate to lawmakers meeting in their biennial legislative session in Carson City that all of Sandoval’s proposed $1.1 billion in new and extended taxes aren’t needed to boost education and that “throwing money at a problem will not solve it.”

The unprecedented alternative budget — laid out in a three-page press release Schwartz put out Feb. 3 — could die on the vine. But Schwartz and Knecht said they have sent it to the governor and to legislators, hoping some of their conservative ideas might catch on with the GOP majority in charge of both houses of the Nevada Legislature for the first time in several decades.

“I think the governor needs to reconsider what he’s proposing,” Schwartz said in an interview. “He’s proposing a funding source that three months ago we said no to. Why are we spending all this money on education?”

Nevada voters Nov. 4 overwhelmingly rejected by 79 percent a proposed 2 percent margins tax on businesses that would have targeted gross receipts of companies making $1 million or more in annual revenue.

Sandoval’s proposed budget would put the annual business license fee, now a flat $200, on a graduated scale with companies paying rates based on their gross receipts, a mechanism the governor said is different than the margins tax. There would be some 30 rate categories, for example, with companies paying from $400 to $4 million a year.

Sandoval also would extend a package of more than $500 million in taxes that were supposed to sunset and increase levies on cigarettes, slots and mining for a total of $1.1 billion in new and extended taxes to fund a $7.3 billion biennial general fund budget. The current budget is about $6.5 billion.

Schwartz’ proposed $6.8 billion budget would continue $470 million in “sunset taxes” and impose a new $5 per passenger “facilities fee” at the McCarran and Reno-Tahoe international airports to raise $540 million over two years. His budget also would bump up gaming taxes to collect another $70 million and cut $20 million in agency and board support.

“We certainly agree that one objective is to improve education in Nevada,” Schwartz wrote in releasing his proposed spending plan. “But the governor’s budget funds a vast expansion of the state’s educational system, a system that despite receiving generous funding in the past, has failed to deliver the goods.”

Schwartz questioned much of Sandoval’s proposed $782 million in new K-12 education spending, saying many of the programs are more like “social work” than schoolwork. He said he doesn’t see why the state should spend $30 million on anti-bullying programs, for example.

“There are some good reforms,” he added, mentioning “zoom schools” to help disadvantaged students. “But are we getting our money’s worth?”

Knecht, who said he hasn’t committed to any final proposed budget but is working with Schwartz on his plan, argues that he and the treasurer have a duty to weigh in on the budget as the top two elected constitutional fiscal officers in the state, although Nevada’s treasurer and controller have never done so in the past.

“Our goal is to address the issues in ways that best serve the public interest and provide for Nevada’s children in the long term,” Knecht wrote in January in his first monthly controller’s report, in which he laid out his fiscal philosophy.

The controller, a longtime opponent of massive tax hikes, was a member of the Assembly in 2003 when he was among 15 Republicans who blocked a proposed record $1 billion plan to tax gross business receipts under then-Gov. Kenny Guinn.

“I’m not trying to pick a fight with the governor,” Knecht said. “I’m trying to make a positive, constructive contribution.”

So far, Sandoval appears to have ignored the two Republicans’ attempts to influence the budget process in the latest example of divisions in the executive branch. The moderate governor is surrounded by conservatives who won office Nov. 4 thanks to a red wave of voters and low Democratic turnout.

Only Lt. Gov. Mark Hutchison, who was recruited by Sandoval to run as his No. 2, has not given the governor heartburn this year.

Laxalt didn’t discuss the suit with Sandoval before joining it.

Secretary of State Barbara Cegavske is promoting a voter ID program to require Nevadans to show government-issued identification to cast ballots, although she hasn’t yet released details of a bill. She plans to back a bill once a measure is introduced by a GOP lawmaker. Sandoval has supported the idea of voter ID in the past but has distanced himself from Cegavske’s plans.

Mark Peplowski, a political science professor at the College of Southern Nevada, said the GOP constitutional officers going their own way “is not conducive to party consistency or cohesion.” He noted that already there are divisions in the legislative ranks with conservative Republicans lining up to oppose Sandoval’s tax plan, especially in the Assembly.

“Now it appears there are going to be divisions in the executive ranks,” Peplowski said. “What looked like a few bright moments for Republicans to have control of everything is turning into a potential nightmare.”

Robert Lang, director of the Brookings Mountain West think tank, said Schwartz and Knecht are supposed to be carrying out regulatory functions, signing checks and making sure the bills are paid, not being involved in setting the state’s agenda.

Still, Lang said some officials who were elected Nov. 4 “feel they have a mandate as well” and, in fact, both Schwartz and Knecht campaigned on the idea that they would be proposing an alternative budget.

“They have their own little government going,” Lang said. “It is very unusual. The Legislature and the governor are charged with setting tax policy, passing budgets and setting the agenda. … If you want to do that, get elected governor.”