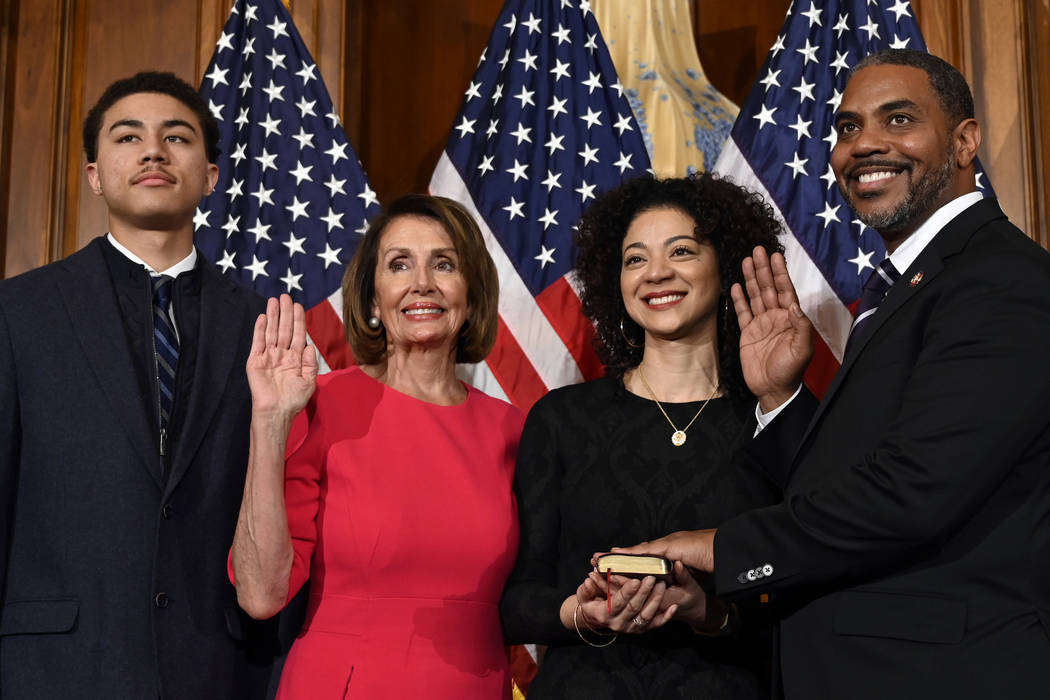 WASHINGTON — After weeks of sparring over President Donald Trump’s plan to build a wall along the Southwest border, the fight resumes this week in Congress.

House Democrats plan to push forward on a resolution to terminate Trump’s emergency declaration as an unconstitutional bypass of Congress to shift funds from Pentagon projects to pay for a border wall.

The state of Nevada could see a loss of $97 million in projects at Creech Air Force Base, Nellis Air Force Base and a proposed National Guard readiness center in North Las Vegas if the Trump administration is successful in shifting $3.6 billion from military construction accounts.

That potential loss prompted Rep. Steven Horsford, D-Nev., to speak earlier this month with Brig. Gen. Kim Colloton with the U.S. Army Corps of Engineers about project funding in Nevada.

Horsford and other Democrats have maintained that the president lacks the authority to do an “end run around Congress.”

Other Nevada Democrats in the congressional delegation, Reps. Dina Titus and Susie Lee, also oppose Trump’s declaration and have signed onto a resolution of disapproval.

Only one Republican, Rep. Justin Amash of Michigan, signed onto the resolution.

House Minority Leader Kevin McCarthy, R-Calif., and other GOP lawmakers in the House support Trump in his bid to find money to build his border wall.

The resolution to terminate the president’s emergency declaration was filed Friday by Rep. Joaquin Castro, D-Texas, under the 1976 National Emergencies Act, which gives Congress the opportunity to disapprove of a presidential action.

Castro said the Trump declaration usurps congressional authority on spending for a manufactured crisis “based on unfounded hype rather than any substantive emergency.”

“There is not an emergency at the border,” Castro told reporters on a conference call, citing federal statistics that show illegal crossings at the Southwest border are at an all-time low.

House Speaker Nancy Pelosi, D-Calif., said the resolution would go to the House Rules Committee on Monday and a floor vote on the bill could come as early as Tuesday.

The resolution is expected to easily pass through the Democrat-controlled House. Its fate in the Senate is less clear, although several GOP lawmakers in the upper chamber, including Sen. Susan Collins of Maine, who faces re-election in 2020, have voiced their disapproval of the president’s action.

Conservative Senate Republicans also have voiced concern about the declaration, noting that the precedent set by the president’s action would allow future presidents to take unilateral action to address other concerns, including gun violence.

Still, Senate Majority Leader Mitch McConnell, R-Ky., would be required to take up the House resolution, forcing GOP lawmakers to take a recorded vote of support or opposition in advance of 2020 primaries and the general election.

If approved by the Senate, the bill would go to the president, who has signaled he would veto it. Congress could vote to override the veto, but that would require an unlikely two-thirds majority in the House and Senate.

Meanwhile, 16 states, including Nevada, have filed suit in federal court to block the president’s declaration and block the administration’s plan to redistribute funding to build a border wall, a signature campaign pledge that Trump famously said Mexico would finance.

The states, all with Democratic governors except Maryland, stated in the lawsuit that the president himself, in announcing the action on Feb. 15, said that “I didn’t need to do this” but wanted to expedite the funding of his wall.

Trump has sought $5.7 billion for construction of portions of a border wall. Congress initially offered $1.6 billion, which Trump rejected, setting off a 35-day partial government shutdown.

A bicameral, bipartisan conference committee then forged a compromise spending bill that provided $1.375 billion for fencing and other border security measures.

That bill was overwhelmingly approved in the House and GOP-controlled Senate and signed by Trump, avoiding another government shutdown. Trump then announced his emergency declaration.

Castro, in announcing his filing of the resolution, said there are “big implications for military funding.”

That would include $96.9 million in projects slated for Southern Nevada, according to the House Appropriations Committee.

Those projects were included in defense authorization and appropriations bills passed and signed into law for fiscal year 2019, which began Oct. 1, 2018.

Horsford also was concerned about other military construction projects at Nellis, as well as federal funds for drought and flood recovery, among other items.

Military construction projects are often sought by local communities and lawmakers who seek to improve the capabilities of installations and protect them from base realignment and closure (BRAC) rounds.

Local installations are a source of federal civilian jobs, and military payroll and spending are pluses for communities.

There were roughly 10,148 military and 3,432 civilian employees at the two bases and the Nevada Test and Training Range, with a combined payroll of more than $983 million, according to a 2017 analysis conducted by the Air Force at Nellis.

A 2016 analysis found the total economic impact of the three facilities amounted to $5.2 billion for Southern Nevada.