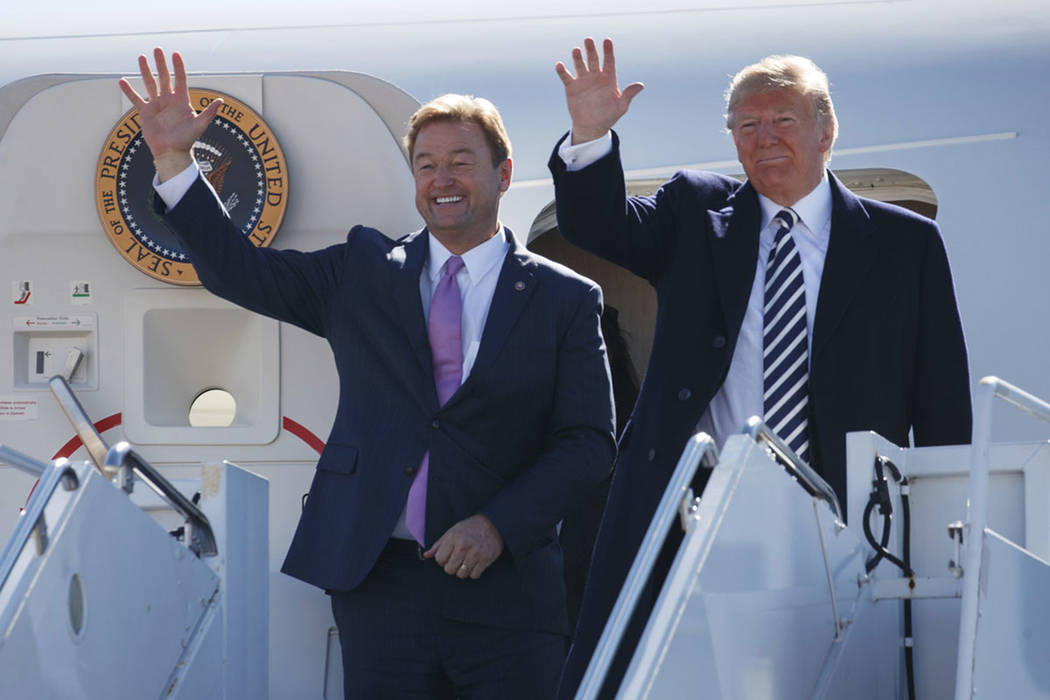 WASHINGTON — President Donald Trump said Wednesday that former Sen. Dean Heller lost his re-election bid last fall because the Nevada Republican had been “extraordinarily hostile” to him during the 2016 election and had alienated the conservative base.

“What happened with Dean Heller is, I tried for him,” Trump said during a sit-down with regional reporters in the Oval Office. But he said his hard-core voter base “did not believe me. They wouldn’t go for him.”

In November, Heller was defeated by Democrat Jacky Rosen, who won 50 percent of the vote to his 45 percent.

“It’s past as far as I’m concerned,” Heller told the Review-Journal when told of Trump’s comments. “This president called me that day before the election and said I was going to win by five points. Now all of a sudden he has a different spin on that. Not surprising. I think America’s used to that.”

Trump accused Heller of leaving the impression that he had voted for Hillary Clinton for president in 2016.

“But the worst he said was ‘no comment,’ which is essentially the same” as saying he voted for Clinton, Trump contended. “When a senator walks out of a voting booth and he’s a Republican and he says ‘no comment,’ that’s not a good sign.”

It was for that reason, Trump said, that he did not nominate Heller to be his next Interior secretary. Heller had been considered a leading candidate to replace former Secretary Ryan Zinke, but on Monday, Trump nominated acting Secretary David Bernhardt for the job.

“I just could never get my base excited on him,” Trump said, before he added, “I like him a lot.”

“I consider the president a friend,” Heller told the Review-Journal. “I like him. I just hate to respond to these kind of comments. He did a lot of good for me in my campaign.”

Trump campaigned for Heller twice in Las Vegas and once in Elko as political prognosticators identified the Nevadan as the most vulnerable Republican in the Senate.

Heller, who had never lost an election, was the only GOP senator to run for re-election last fall in a state Clinton had won in 2016. Trump lost the Silver State by a margin of 2.5 percentage points.

“I don’t agree with that necessarily. I think Heller ended up supporting the president on important issues. I think people respected that,” Rogich said.

“I think you’ve got to credit Democrats for being organized and getting their people to vote,” he said. “That’s why Republicans lost so overwhelmingly in November.”

Before they became political allies, both Trump and Heller had to overcome early misgivings. Leading up to the 2016 general election, Heller said that he was “100 percent against Clinton, 99 percent against Trump.”

Heller remained coy about how he voted — “I kept it to myself,” he recalled Wednesday — until August 2017 when he publicly revealed that he had voted for Trump.

By then Heller had already crossed Trump when he announced his opposition to a GOP measure to repeal and replace the Affordable Care Act.

In an attempt to fortify the party’s resolve to repeal President Barack Obama’s signature health-care law, Trump then invited GOP senators to the White House for lunch. With Heller seated next to him, Trump said the Nevada Republican was “the one we’ve been worried about. You weren’t there. But you’re going to be.”

To punctuate his point, Trump added, “Look he wants to remain a senator, doesn’t he?”

Heller later voted for a “skinny repeal” bill that failed.

In the Oval Office Wednesday, Trump recalled that “for three or four months he (Heller) was very difficult on health care, but we got there and then he was great after that.” Trump added that his base could not let go of Heller’s perceived transgressions.

Republican Danny Tarkanian had launched a challenge to Heller until March 2018 when Trump tweeted that it would be great for the Nevada GOP “if good guy Danny Tarkanian would run for Congress and Dean Heller, who is doing a really good job, could run for the Senate unopposed.”

Tarkanian obliged by setting his sites on Rosen’s vacated House seat. In November, he lost to Democrat Susie Lee.