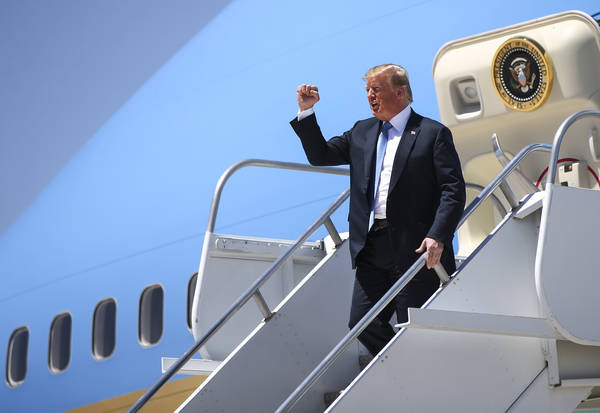 WASHINGTON — President Donald Trump returns to Las Vegas on Thursday at a sensitive moment in his presidency, weeks ahead of midterm elections that could alter control of Congress.

Trump arrives as a controversy engulfs his nominee to the Supreme Court, Brett Kavanaugh, residents of the Carolinas work to recover from damage wreaked by Hurricane Florence and former associates are cooperating with special counsel Robert Mueller’s investigation into Russian interference in the 2016 election.

Trump is expected to weigh in on two key races that could determine whether Republicans continue to keep control of the Senate and the House.

Sen. Dean Heller, R-Nev., the only Republican senator running for re-election in a state that Hillary Clinton won in 2016, is in a tight race against Democratic challenger Rep. Jacky Rosen. Meanwhile, Republican candidate Danny Tarkanian is running to replace Rosen in the House. Trying to hold the seat for Democrats is Susie Lee.

Earlier this year, Trump nudged Tarkanian to withdraw from a primary challenge against Heller and instead run for Rosen’s seat.

If Heller loses and the GOP fails to win a seat held by a Democrat, his loss could produce a 50-50 split in the Senate, with any tie votes settled by Vice President Mike Pence.

The RealClearPolitics polling average puts the Senate race at a statistical tie.

“I think Trump is coming to Nevada because they’re scrambling to protect their Senate majority,” Rosen spokesman Stewart Boss said.

But when Trump comes to Las Vegas, Boss added, “it energizes our base, our donors, our supporters.”

Longtime Nevada GOP political strategist Sig Rogich disagreed. “I don’t think he’s a liablity per se,” Rogich told the Review-Journal. “I think his voter base is pretty well-defined. I think there’s an opportunity to raise some campaign money here.”

Rogich sees the Trump rally energizing the GOP base.

Boss framed the Kavanaugh controversy as “the biggest problem for Heller,” as the senator announced in July he had “no reservations” supporting the Trump nominee. That was before a California professor, Christine Blasey Ford, alleged that Kavanaugh sexually assaulted her in the early 1980s when both were teenagers.

Republicans have scheduled a Senate Judiciary Committee hearing for Monday that is supposed to feature Kavanaugh and Ford. Backed by Democrats, Ford has said she wants the FBI to first investigate the alleged incident before she testifies.

As Democratic operatives have been concentrating on the Nevada Senate race, GOP politicos hope to win the congressional seat Rosen is vacating, which had been in GOP hands until then-incumbent Joe Heck ran for Senate and lost in 2016.

Outside of Nevada, Democratic party operatives see an embarrassment of riches as they try to flip more than 24 House seats held by Republicans.

Before attending to election matters, Trump took care of business Wednesday. The president traveled to the Carolinas to spend the day surveying the damage from Hurricane Florence, discussing relief efforts and handing out styrofoam packages of hot dogs, peas and apple sauce to affected residents of flood-ravaged New Bern, North Carolina.

According to the Trump campaign, this will be Trump’s eleventh rally in Nevada and seventh in Las Vegas since he declared his candidacy in June 2015.

With the Thursday rally, Trump will visit the North Las Vegas VA Medical Center on Friday morning, when he will sign an appropriations bill that provides $97.1 billion for military construction and Veterans Affairs and funding for the Department of Energy and VA Mission Act.

Trump will speak at a fundraiser for Heller and Tarkanian at an undisclosed location and time on Friday. For $50,000, couples can attend a roundtable and have a VIP photo taken.