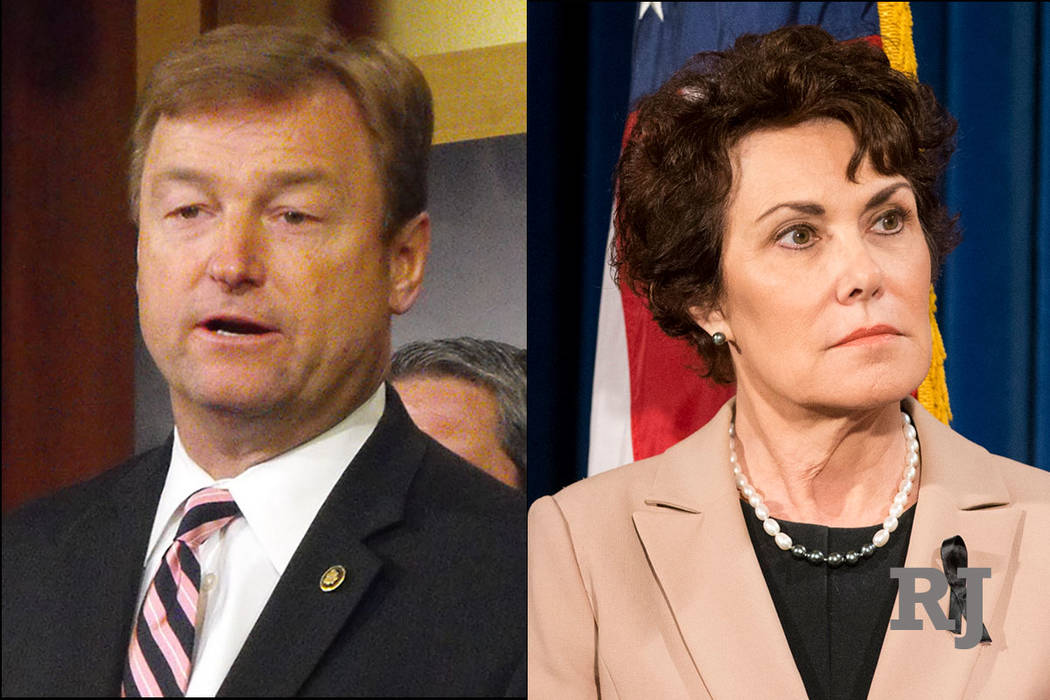 The path to victory in Nevada’s tight U.S. Senate race could lie in the hands of Nevada veterans.

The Silver State is home to 300,000 veterans and Republican U.S. Sen. Dean Heller and challenger Democratic U.S. Rep. Jacky Rosen are working harder than ever to court them.

Heller seized the opportunity to reach veterans in his first TV ad since the primary election. The 30-second spot features veterans who vowed to support Heller in his re-election bid, touting his legislative efforts to improve health care for veterans.

The One Nation political action committee has flooded airwaves with at least three ads praising his work on veterans issues.

While both sides push hard to win over those who served this country, many veterans are considered “purple” voters. They don’t vote down traditional party lines, said Mikey Kelly, chairman of the Nevada Democratic Veterans and Military Caucus.

“Veterans are very results-driven,” he said, “They’re not necessarily looking at a person’s political party. They’re looking at what they can achieve to improve the lives of veterans and military families here in Nevada.”

That approach could decide Nevada’s razor-close Senate race, a nationally watched contest that could determine which party controls the upper chamber of Congress.

Kelly said his group endorsed Rosen because she’s been an advocate for veterans.

But Richard Carreon, president of the Nevada Veterans Association, said Heller has been a bigger champion for service members and vets. Carreon’s group endorsed Heller, pointing to the senator’s record of passing laws to reduce the VA backlog, increase benefits for disabled veterans and improve access to health care.

“Dean Heller has championed 40 pieces of legislation to support our veterans that are now law, and has fought with bureaucrats — and won — to get Nevada veterans the care and benefits they have earned,” said Heller campaign spokesman Keith Schipper. “While Dean delivers for our heroes, Jacky Rosen has abandoned them.”

Heller’s campaign accused Rosen of campaigning with “Hanoi Jane Fonda” — referring to a nickname Fonda was given after she was photographed sitting on an antiaircraft gun during a 1972 trip to North Vietnam. Rosen’s campaign said the actress didn’t attend the event in question and called the attacks “false, dishonest and desperate.”

“Jacky meets often with veterans in her district, and she has been working across party lines in Congress to put forward real solutions and get results that will improve the lives of Nevada veterans and expand their access to health care and economic opportunities,” said Rosen campaign spokesman Stewart Boss.

The state counted nearly 7,000 military-overseas ballots in 2016, though it’s unclear how many Nevada veterans are now registered to vote.

“Veterans can either push people over the finish line,” Carreon said, “or make it more competitive so the person who is favored is going to have to work harder for that vote.”