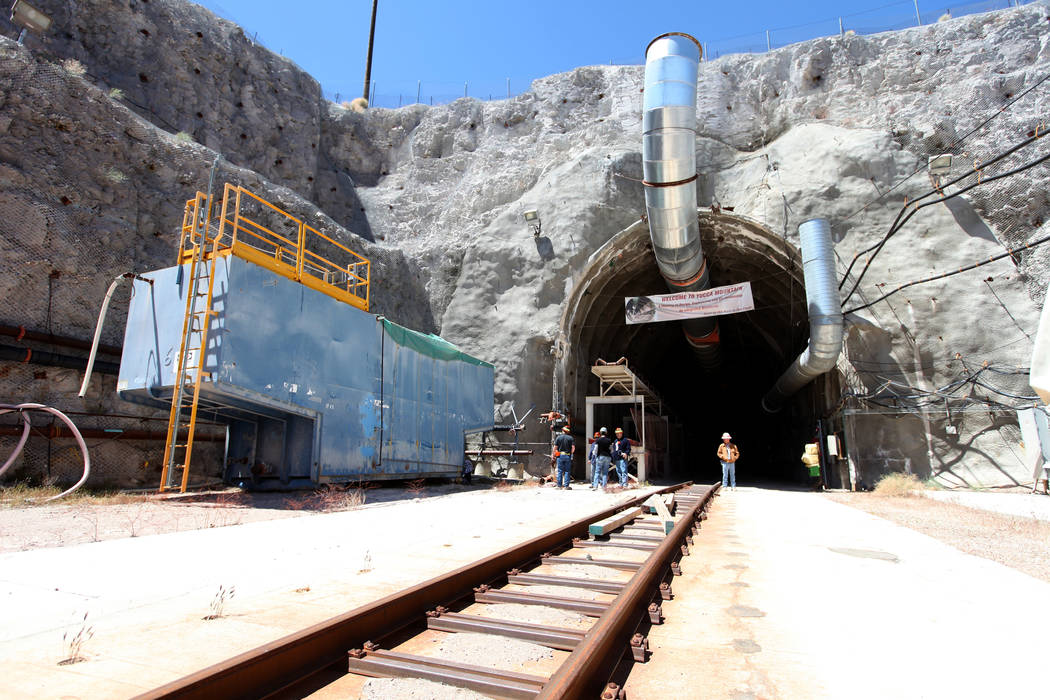 PAHRUMP — Legislation that would allow the Department of Energy to resume its license application process to store nuclear waste at Yucca Mountain could see a House vote this week — a prospect that was met Thursday with mixed reaction in Nevada.

A bill approved last year by the House Energy and Commerce Committee to jump-start the licensing process is being reviewed by the Rules Committee, and the legislation will move to the floor next week when Congress returns from a weeklong recess.

The legislation would streamline the process to open Yucca Mountain to store nuclear waste and address the stockpile of spent fuel being stored at power plants across the country.

“We owe it to the 121 communities across 39 states, as well as to every American taxpayer forced to shoulder the daily $2.2 million burden of inaction, to get this done,” said Reps. Greg Walden, R-Ore., and John Shimkus, R-Ill., in a joint statement.

Walden, chairman of the Energy and Commerce Committee, and Shimkus, chairman of the environment subcommittee that wrote the bill, noted that an overwhelming majority of lawmakers from both parties voted 49-4 to pass the bill out of committee last year.

The legislation authorizes spending to restart the licensing process. The Senate blocked the spending last year.

Federal plans to store spent fuel rods and other nuclear waste have been met with stiff opposition in Nevada from most elected officials, except those from rural counties, including Nye County, where Yucca Mountain is located.

“As has been stated many times before, this bill, and our interest, is only to have the science heard by a neutral, technical body and not be muzzled by politics,” Schinhofen said in a statement.

Gov. Brian Sandoval, a Republican, has vowed to spend millions in state money to stop the nuclear repository from opening. He is backed by most lawmakers in the state’s congressional delegation.

Rep. Dina Titus, D-Nev., said nothing has changed since the delegation testified against the bill last year.

“Bringing this legislation to the floor is nothing more than a show for the nuclear industry and its campaign cash recipients in Congress,” Titus said.

Rep. Jacky Rosen, D-Nev., has filed legislation that would prohibit the DOE from taking any action to license Yucca Mountain as a nuclear repository until the federal government studies alternative uses for the Nevada site.

The legislation would direct the Office of Management and Budget to conduct a study on alternative uses, including defense activities like a command facility for unmanned aircraft.

Rep. Ruben Kihuen, D-Nev., whose congressional district includes Yucca Mountain, is opposed to the bill. Rep. Mark Amodei, R-Nev., has spoke in favor of allowing the application process to continue.

Heller specifically asked Senate appropriators not to include funding for licensing sought by the Trump administration and the House.

The waste is stockpiling at power plants because the federal government has failed to license and develop Yucca Mountain, which was designated by Congress in 1987 as the nation’s permanent nuclear waste repository.

Funding to restart licensing for Yucca Mountain in fiscal 2018, which began Oct. 1, died after House and Senate negotiators failed to reach agreement and place it in a final spending bill. While the House included the funding, the Senate did not.

The chairman of the Senate Appropriations subcommittee on energy, Sen. Lamar Alexander, R-Tenn., has said he plans to file a bipartisan bill that would emphasize interim storage of nuclear waste until permanent repositories, like Yucca Mountain, can be developed.

The Energy Department stopped the licensing process in 2011 under the Obama administration.